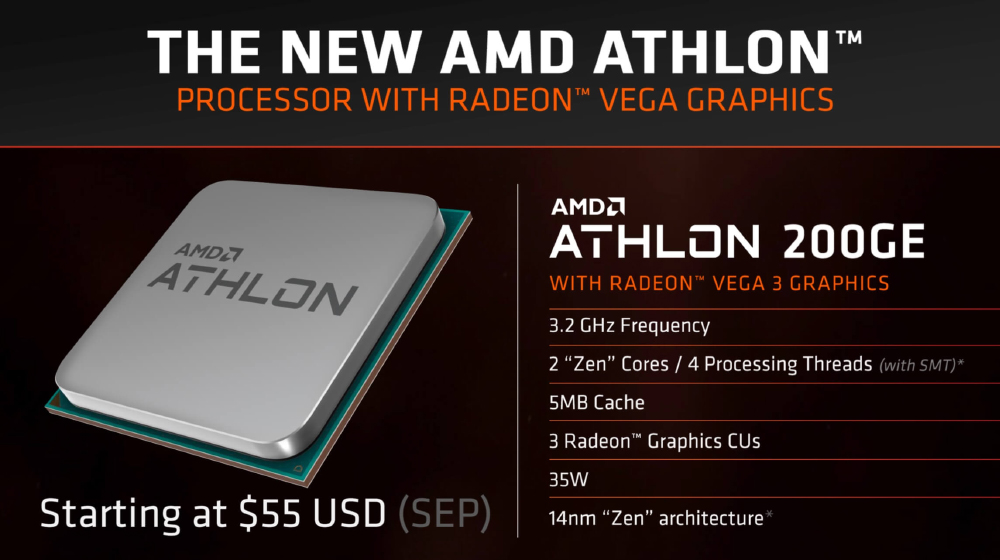 Advanced Micro Devices, or AMD as it’s more commonly known as is targeting the low-end market and has launched new Zen-based processors that are sure to give a tough time to Intel’s lower-end Core processor line.

The new Athlon 200GE chip is an accelerated processing unit (APU), meaning it comes with a built-in GPU and a processor packed into one chipset much like Intel’s Core lineup. It pairs with Radeon Vega 3 graphics, and has two CPU cores at a catchy price of just $55.

AMD hyped up the market when it revealed it’s high-end Ryzen processors, as they easily beat Intel’s i7 chipsets at a lower price. The newly launched Athlon 200GE also promises higher performance figures, as well as decent FPS in some popular games for a rock bottom price.

Spec-wise, the Athlon 200GE has 2 cores and 4 threads, and it runs at a frequency of 3.2 GHz, achieving a 35-watt TDP rating. Unlike the CPU, the GPU’s DDR4 memory can be overclocked so you might be able to some more power out of it. The CPU is locked at its frequency by default, much like low-end Intel processors, so you can’t overclock it.

According to official figures, AMD’s recently launched Zen architecture can carry out 52 percent more instructions per clock cycle as compared to previous chips available in the market. The company says that the Athlon 200GE can offer up to 67 percent more graphical performance and 2 times power efficiency as compared to the competition as well.

Its gaming performance reflects the new improvements, as the chip is capable of 84 percent faster HD gaming than rivaling APU’s.

For the Vega 3 GPU, AMD promised decent gaming performance in popular titles. The FPS comparison chart is shown below:

These are some good numbers, considering the fact that the Vega 3 will ship with the Athlon 200GE by default, and that it significantly outperforms Intel’s processors that fall in the same entry-level bracket.

Other than the Athlon 200GE, the company also unveiled a handful of Athlon PRO desktop processors, that are slightly more powerful than the latter.

AMD says that the new Athlon PRO processors are made for business, and ensure reliability, security, and performance to handle most computing tasks that users might face in today’s workloads.