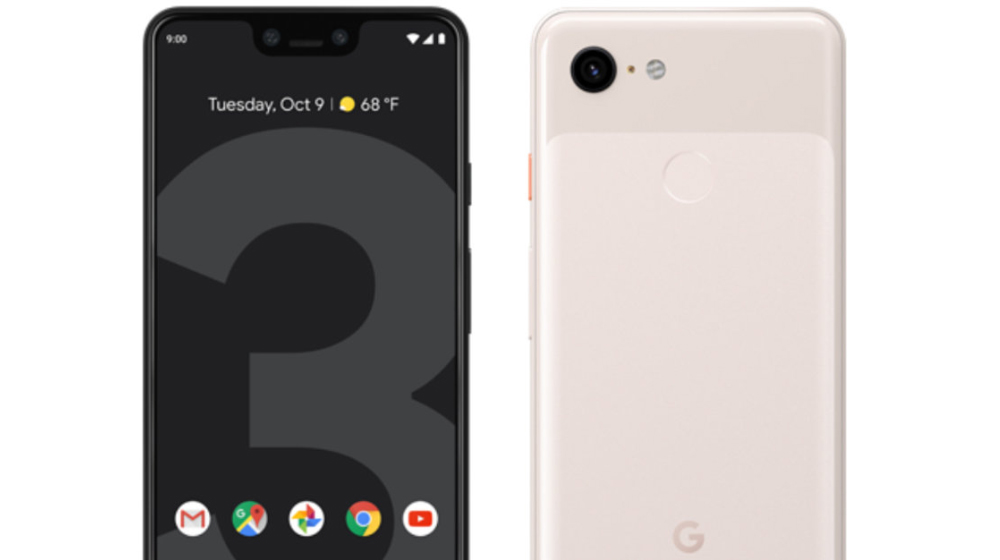 Leaves nothing to the imagination.

Google is confirmed to reveal the highly-anticipated Pixel 3 and 3 XL duo in its official New York-based press event on 9th of October and might announce a release date for the company’s latest flagship phones.

It’s going to be a major release, as the Pixel brand rose to popularity with its premium components and great cameras. What’s more is that this series receives direct updates from Google, and also gets great software features from the home of Android itself. 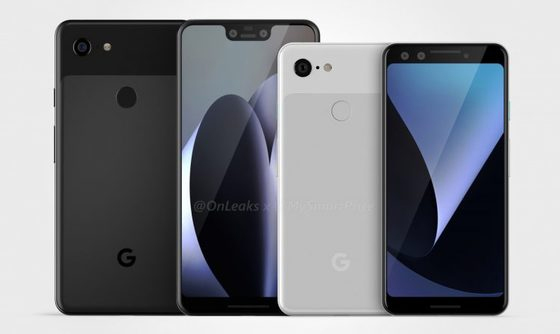 The Pixel 3 and 3 XL have been in the rumor mill since the past few months. The larger one in the duo, Pixel 3 XL, allegedly has a notched design that has already attracted criticism. Pixel 3, on the other hand, is expected to have a clean, minimal, and modern design just like the predecessor.

Other than that, rumors suggest a number of new features such as Qi wireless charging as well as a new material build instead of a glass-metal combination seen in the previous versions.

Anyway, here’s a roundup of everything we know about the Pixel 3 and 3 XL duo.

As we mentioned before, most of the specifications have already been leaked.  Even the design surfaced on the web weeks ago, and there are only a few things that will be confirmed later on.

Here are some other details that have leaked since the past several weeks.

Pixel 3 XL is larger than the Pixel 3, with a 6.3-inch notched display and a phablet-size body. As seen in leaked screenshots, the phone is going to have a P-OLED display, just like last time in Pixel 2 XL, with a resolution of 1440 x 2960 (QHD+).

Pixel 3, on the other hand, is expected to have a 1080 x 2160 (FHD+) display instead, at a smaller size that has not been revealed so far. It is expected to be a 5.8-inch unit, with a similar tall aspect ratio.

Earlier, there were some details related to the Pixel 3 and XL that were still not revealed. Afterwards, a reporter on Twitter managed to get his hands on a full brochure leaked from a UK-based carrier – the Pixel 3 duo is probably one of the most extensively leaked phones we got to see recently.

Read its details below: 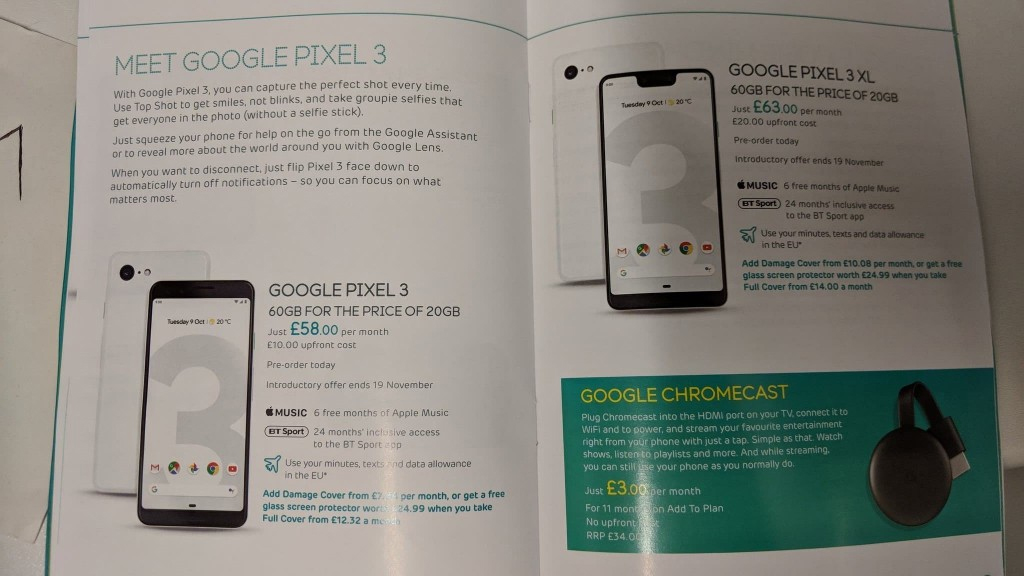 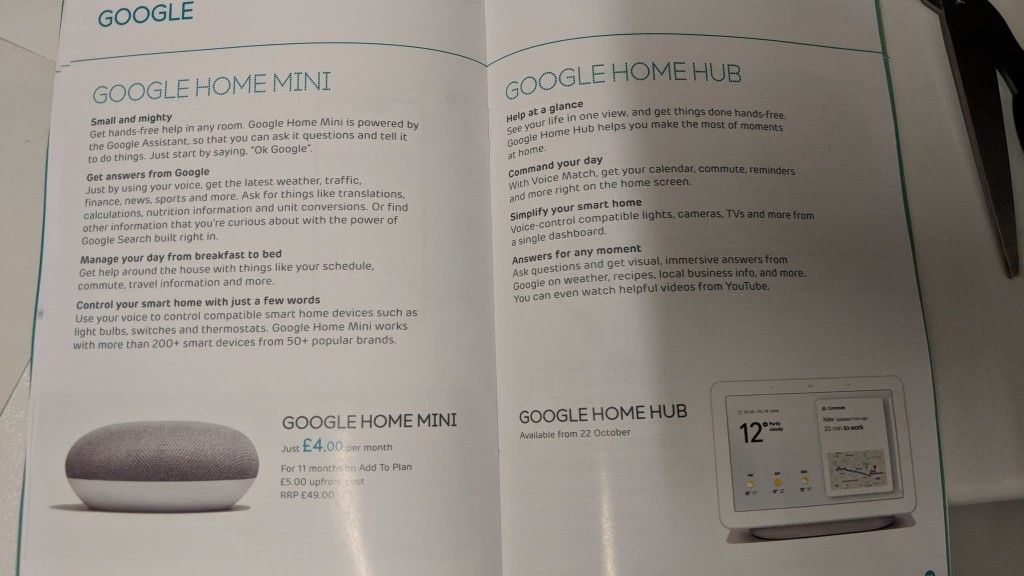 The brochure also has some information on Google Home Mini and Google Home Hub, so you can read the second image if you are interested.

After that, a full-fledged hands-on review appeared on a Hong Kong website, that details everything you need to know about both Pixel 3 and Pixel 3 XL. The review even shows the duo’s camera performance and shared a number of photography samples. The reviewer also compared the camera with iPhone XS Max.

Google is sticking to the same single rear camera set up on both phones. On the rear, both Pixel 3 and Pixel 3 XL will have a single 12 MP shooter, accompanied just by an LED flash. These lenses will come with high-level smartphone photography tech such as OIS.

However, the front camera set up on the XL has two sensors instead. The second sensor is a wide-angle camera to “take selfies without a selfie stick”, Google calls this “Super Selfie Mode”.

Here are a few camera samples:

Pixel 3 XL’s camera, apparently, is really impressive, considering that it’s able to take better low-light shots than the iPhone XS Max’s dual cameras despite having a single lens on the rear.

Naturally, both Pixel phones will come with Google’s latest version of Android 9.0 Pie. We have some screenshots on how the new firmware on Pixel 3 and Pixel 3 XL looks like:

Much like all Pixel phones, this year’s Google flagships will be the first to get the latest Android firmware, with fast updates and smoothest, stock interface with minimal proprietary bloatware.

Active Edge is a feature that will let you squeeze your phone to carry out a task. It is similar to HTC’s Edge Sense, and it has been teased by Google in its Japanese commercial on YouTube. Check it out below:

The commercial does show people “squeezing” stuff, however, it does not reveal the device itself. It also does not show what the Active Edge trigger does, but we know that thanks to the leaked brochure above – squeezing the Pixel 3 and Pixel 3 XL will allow you to access Google Assistant without pressing any physical or touchscreen buttons.

Moving on to the internals, both phones will be powered by a Snapdragon 845 chipset, paired with Adreno 630 GPU. RAM size is going to be at least 4 GB, higher memory variants are also likely to get launched alongside.

Moreover, the Pixel 3 XL will come with a larger 3,430 mAh battery, Pixel 3, on the other hand, will have a 3,000 mAh unit. They’ll both support USB Type-C, as well as some fast charging tech. An earlier leak hinted that Google is adding Qi wireless charging this time, though we don’t know whether it’s going to be fast wireless charging or not.

Google has already confirmed that the Pixel duo will be available for pre-order right after its event tomorrow on 9 October.

Watch this space to get updates on Google’s Pixel event.