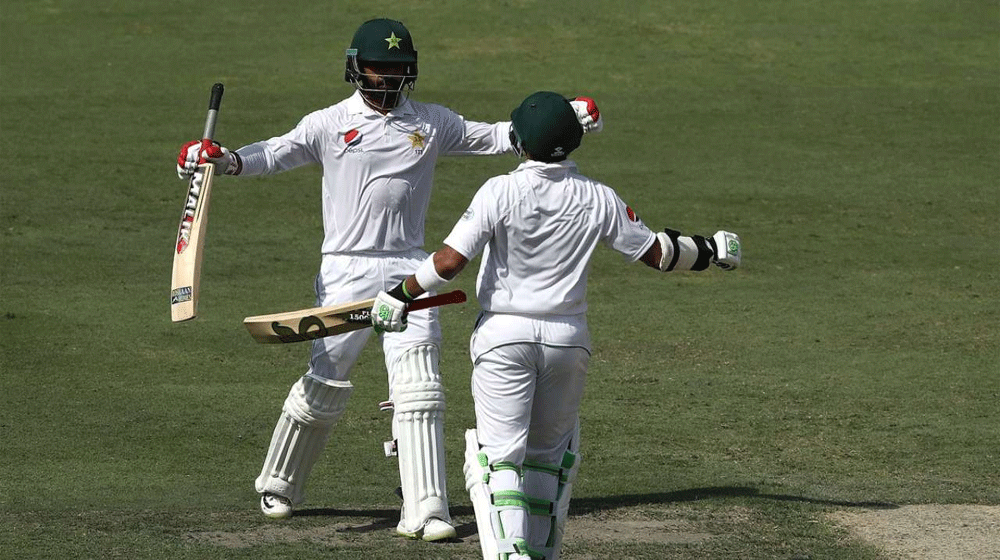 Courtesy of a brilliant comeback hundred by the seasoned all-rounder Mohammad Hafeez and an elegant 76 from the young-gun Imam-ul-Haq, this Pakistani opening pair recorded the 50th 100-run opening stand for the country on the first day of Dubai Test against Australia.

This was Hafeez’s 10th Test hundred and only first against Australia in 51 Tests. He went on to score 126, hitting 15 classical boundaries in his 208-ball inning.

Hafeez also holds the record for scoring the most runs and centuries as an opener for Pakistan. He has 3,465 runs and 10 centuries as a Test opener, second only to Saeed Anwar.

The 22-year-old Imam’s 76-run contribution was his career-best score. It was his second half-century in the fourth Test of his career. The stylish-left arm batsman smashed his Test debut – 74 not out against Ireland in May this year, saving Pakistan from a humiliating defeat at the hands of a debutant Ireland.

The duo scored 205 runs for the opening wicket partnership, second only to the highest stand between Sami-ul-Haq and Azhar Ali’s 215 in 2016.

The pair remained undefeated until tea of the day 1. This was the first time in 40 years for Australia that their bowling attack was unable to yield any wicket in 60 overs.

The 205-run partnership between Hafeez and Imam stands fifth among Pakistan’s highest opening stands in the history of Test cricket. This is also the fifth opening stand of 200 or more runs, with 298-run stand shared by swashbuckling pair Aamer Sohail and Ijaz Ahmed.