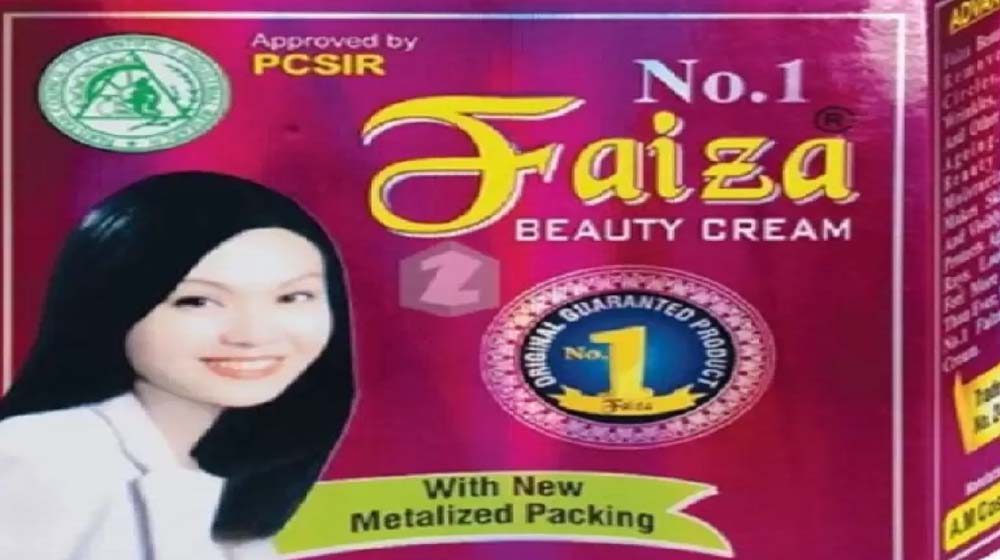 Fake and toxic beauty creams and cosmetic products have been witnessing mushroom growth in the country in the wake of increased demand.

In the absence of proper checks and regulatory framework, low quality and fake cosmetic products, especially fairness and beauty creams, have flooded the markets in the country.

However, the regulatory bodies have finally realized the gravity of the situation and have sprung into action to ensure the quality of the products.

The authority has dubbed a leading beauty cream brand being produced in the country as a major health hazard.

As per a PSQCA report, Faiza Beauty Cream has been found to contain carcinogenic ingredients as analyzed by public sector and private sector labs in Pakistan, causing harmful effects to the user’s skin and health.

According to the report, Faiza Beauty Cream is being manufactured by M/s Poonia Brothers in Gujranwala since 2011, which is now the largest manufacturer of “Skin Whitening Cream” in Pakistan.

The report said that Faiza Beauty Cream contains mercury, hydroquinone and steroids and is sold all over Pakistan at wholesale, general stores as well as medical stores. The open market surveillance conducted by PSQCA in Lahore and Karachi has reported higher values of mercury.

The PSQCA liaison office Gujranwala has issued notices to M/s Poonia Brothers over mercury value, which is greater than 60 mg/Kg (60 ppm) – much higher than the limits set by World Health Organisation (WHO) at 1 mg/kg. Mercury-containing skin lightening products are hazardous to health and as a result, have been banned in Pakistan.

In Pakistan Standards, PSQCA has already incorporated mercury, hydroquinone and corticosteroid limits in accordance with WHO. Moreover, Ministry of Science and Technology has issued Technical Regulation in the form of SRO 45 (KE)/2017 PS:3228/2017, dated May 19, 2017, to regulate “skin creams” all over Pakistan through PSQCA. However, there are reports of such products still being sold while being heavily advertised on different media channels.

“M/s Poonia Brothers has invested millions in the advertisement for “Faiza Beauty Cream”.  Public awareness needs to be raised regarding the types of products and the specific products that contain mercury and the risks associated with mercury exposure,” the report said.

The PSQCA previously reported the availability of a mercury-containing beauty cream manufactured in Gujranwala several times.

Since the company has not followed various notices issued by PSQCA, the authority, which is the only government body to monitor the quality of such products, has issued its final notice to the company on November 26, 2018, asking the company to stop production and sale of its products.