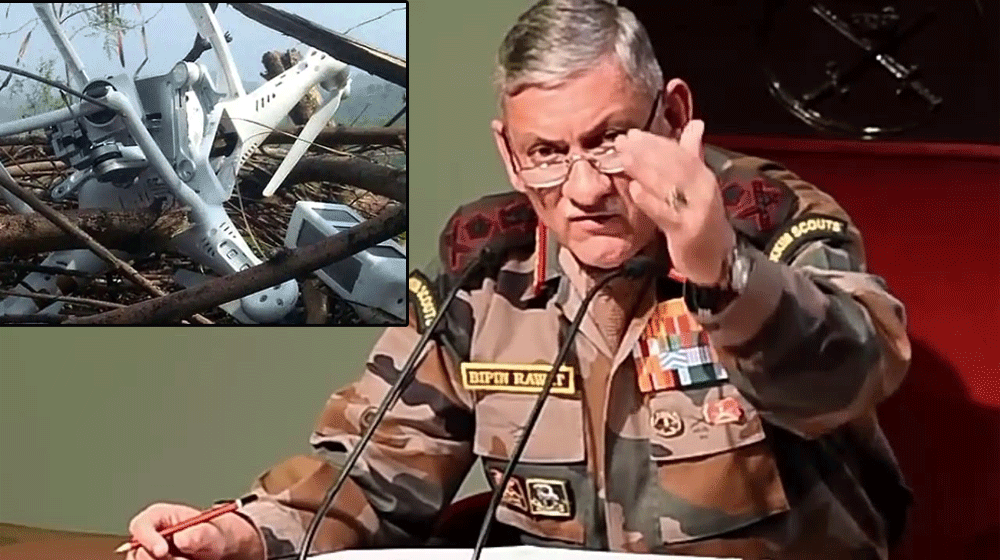 Indian Army Chief, Bipin Rawat, has confessed that two of their spy quadcopters were shot down by the Pakistan Army near the Line of Control.

Rawat made this statement during a press conference in New Delhi on Thursday.

While speaking to media, Rawat said two of their quadcopters sent across the LoC with the intention of spying over Pak Army were taken down.

With this statement, not only did he confess spying over Pakistan but also exposed the Indian army’s incapability.

Indian army chief shamelessly accepted his army’s involvement in ceasefire violations at LoC, despite knowing that the civilian population lives in proximity on Pakistan’s side of the line.

His remarks have further strengthened Pakistan’s stance against Indian atrocities both in Occupied Kashmir and on the Line of Control.

Pakistan Shoots Down An Iranian Spy Drone in Balochistan

“Not even a quadcopter will be allowed to cross LOC, In Shaa Allah,” ISPR Director General Major General Asif Ghafoor had said following the incident.

So far, Pakistan has taken down three Indian spy drones in as many years.

It all started in November 2016, when our brave soldiers shot down an Indian UAV (unmanned armed vehicle) in Rakhchikri sector along LoC.

Then in October 2017, another attempt of intrusion by the Indian army was foiled as Pakistan army shot down another spy quadcopter in the same sector.