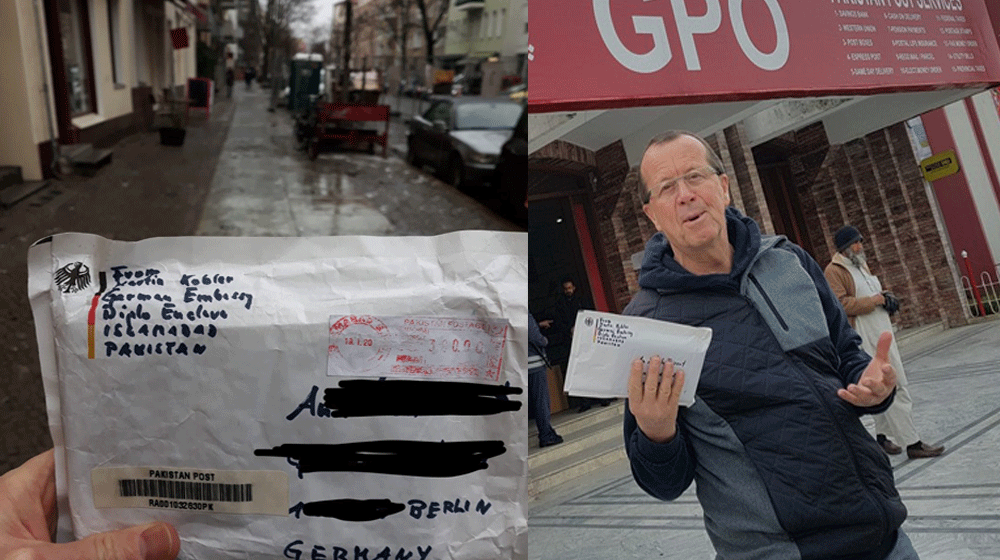 Well, today he was thoroughly overwhelmed by the fact that for just Rs.200, his parcel had safely reached home within seven days.

“Remember I sent a gift to my family in Berlin with unregistered mail for just 200pkr? Enthusiastic, that it arrived just in 7 days!,” he wrote on Twitter.

Remember i sent a gift to my family in Berlin with unregistered mail for just 200pkr?
Enthusiastic, that it arrived just in 7 days!
AMAZING, RELIABLE SERVICE!!@MuradSaeedPTI@ImranKhanPTI@pid_gov @fawadchaudhry pic.twitter.com/eHKid0bqrN

The German envoy admired the government, in general, and Murad Saeed, in particular, for making Pakistan Post a reliable service again.

In his previous visit, Kobler had also praised the friendly staff of Pakistan Post. Here is what he said:

great to hear that Pakistan Post has become reliable & delivers fast now. so just sent a small gift to my family in Berlin. thank you for the service and friendly staff at the post office @MuradSaeedPTI 👀 pic.twitter.com/02lo2Xghy9

Federal Minister for Communication and Postal Services has vowed to turn the loss-mounting department into a profitable one.

To do so, the national postal service, under his leadership, first launched Urgent Mailing system in October 2018 which promises nationwide parcel delivery in 12 hours at half the rates charged by its competitors.

And now in early January, the department has announced ‘export parcel service’ which offers parcel delivery to foreign countries in 72 hours. The charges for this service are about five percent less than competitor private companies.