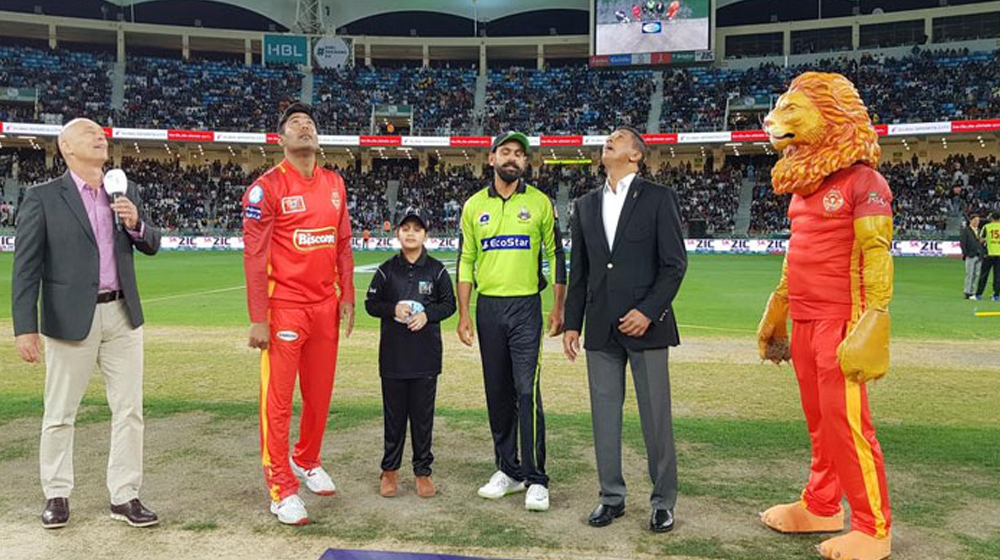 The first match of the Pakistan Super League (PSL) 2019 proved to be a remarkable spectacle for the fans. Following the grand opening, both teams took center stage and put up a great show.

Islamabad United won the toss and elected to field first. The decision proved costly at the beginning as Fakhar Zaman and Sohail Akhtar opened the innings for Lahore Qalandars and took the game to the opposition.

Soon after the start of the innings, both openers hit top gear with Fakhar reaching his half-century from just 34 balls. His partner, Sohail also fared well as he scored 37 from 30 deliveries.

AB de Villiers walked in following the departure of Sohail and the ground erupted with joy. The Mr. 360 looked in great nick but failed to get going completely. He returned to the pavilion after scoring a quick 24 from 17 balls.

Lahore Qalandars, 130 for 2 after 15 overs only managed to gather 171 runs after the completion of 20 overs.United came back strongly in the final five overs of the game as they conceded only 41 runs.

For Qalandars, Faheem Ashraf carried his good form and picked up 2 wickets for just 24 runs from his 4 designated overs. Waqas Maqsood picked up the important wicket of AB de Villiers and picked up 1 wicket along with CS Delport

Islamabad United started their innings chasing 172 runs. Luke Ronchi, who has been an impressive candidate in the previous edition of the competition looked comfortable hitting the ball around. He scored some quick runs alongside an impressive Rizwan Hussain.

Rizwan, however, fell victim to Rahat Ali and managed only 15 runs from 15. Luke Ronchi returned to the pavilion on the next ball and suddenly the pressure was back on Islamabad.

Phil Salt, making his debut in PSL, couldn’t make an impact either and managed only 4 runs and Islamabad were 49 for 3. Delport and Hussain Talat built a partnership to pull the game back following a catastrophic start.

Rahat Ali was again brought back into the attack and he picked up his 4th wicket, this time Delport was the victim.

Talat managed to keep the runs ticking, scoring boundaries every now and then but always looked rather uncomfortable at the crease. He fell prey to Brathwaite for a hard-fought 37 from 30 deliveries.

At this point, Islamabad were 118 for 5, with Asif Ali and Faheem Ashraf at the creased, needing 57 from 42 deliveries.

The all-rounder, Faheem, brought some life to the game with a huge six early in his innings and a couple of reverse sweep boundaries off of Yasir Shah.

Requiring only 37 from 24 deliveries with 5 wickets in hand, Asif Ali showed his hard-hitting skills and ensured a tight finish to the game.

Unfortunately for Qalandars, despite looking like winning the game for the majority part of the game, Asif Ali’s magnificent innings ruined their hopes.

Islamabad United win by 5 wickets with 4 balls to spare.

For complete information regarding the match, visit the match page from here.