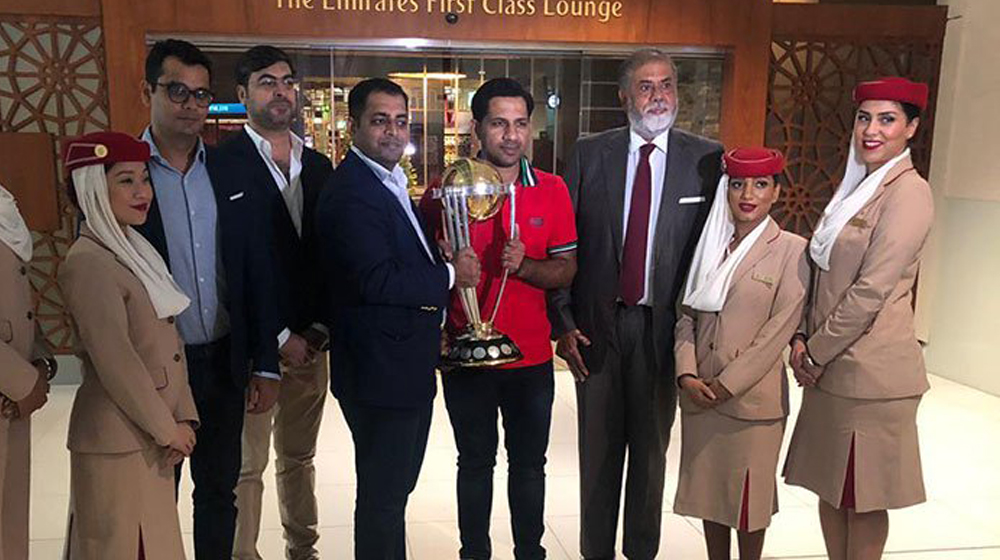 The ICC World Cup trophy has arrived in Pakistan for the second time on its global tour prior to the kick-off of the mega-event in England and Wales on 30th May.

The trophy arrived at Dubai Airport and was accompanied to Islamabad by Pakistan skipper Sarfraz Ahmed.

Sarfraz Ahmed will take the 2019 World Cup Trophy to the Prime Minster’s house on 11th April and meet Imran Khan. The Trophy will be on display at PM’s house, with Sarfaraz and Imran Khan expected to have a photo session with the trophy.

According to PCB officials, the trophy will be open for public viewing at Centaurus Mall on 12th April.

The trophy will then travel to Lahore on 13th April and can be viewed by fans at Packages Mall on the very same day. For Karachi, it will make a pitstop at Dolmen Mall Clifton on 14th April.

Media reports confirm that a grand celebration will be held on 14th April which will feature a concert, food festival and fireworks.

Previously, the trophy made its way to Pakistan from 3rd to 13th October, 2018 during its global tour.