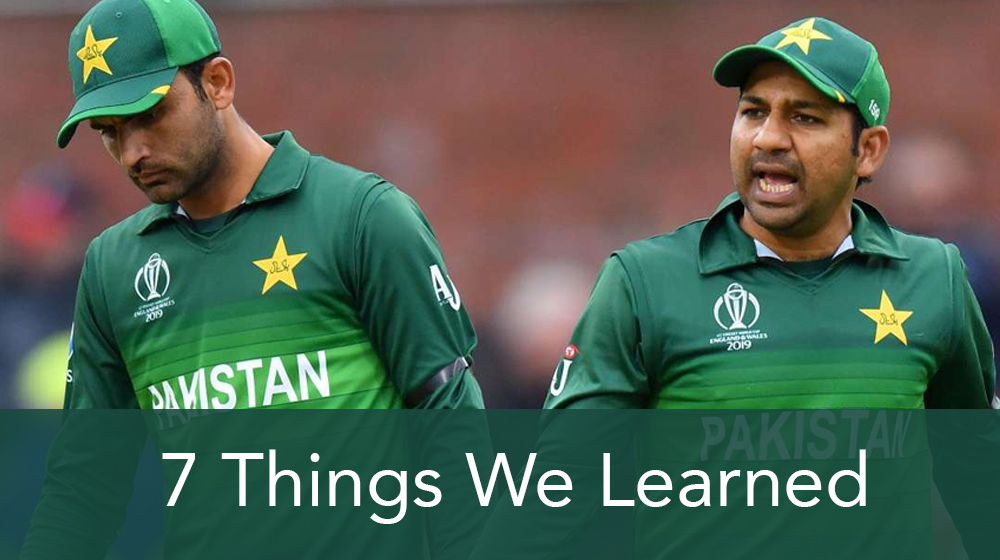 After beating England, Pakistan were on a high-note but their performance against Australia suggested that the Men in Green are truly incapable of carrying on with the good form.

Despite winning the toss, and against the experts’ advice, Pakistan opted to field first instead and failed to impose themselves on the Aussies in the early overs. This led to a mammoth opening stand from Aaron Finch and David Warner.

A lack of gameplan was visible from the Pakistan side despite having time to prepare for the game as the Sri Lanka match was washed out.

So, here’s what we learned from yesterday’s game:

Having an average of 57.15 is always impressive in one-day internationals. However, the way Imam gets his runs should always raise a red flag. His cautious approach – although ideal when paired with Fakhar Zaman – only remains until he has reached a handsome amount of runs. Imam fails to convert his innings after justifying that he scored enough runs.

His yesterday’s performance was similar in fashion. He played a sensible inning until he reached his half-century and casually threw away his wicket despite being well settled in. His strike-rate of 70.66 eventually had an adverse effect later on when Wahab Riaz and Sarfaraz Ahmed were batting. Had there been extra 10 balls, it could have impacted their approach to chasing down the target.

Babar Azam and Mohammad Hafeez Complacent as Ever

Arguably two of the best batsmen in Pakistan’s camp, Babar and Hafeez face the same dilemma as Imam-ul-Haq but their approach but they aren’t as hungry to hold on to their wicket as Imam-ul-Haq, which implies that both play according to the situation and not for themselves.

However, Babar and Hafeez both are prone to throwing away their wickets quite cheaply. In the match against Australia, Hafeez’s top-edge to the third man and Hafeez’s full-toss mishit could have both been avoided had they not been complacent.

Playing at the highest level, there is much more expected of both players and it remains to be seen whether they can step up to the pressure or not.

Shoaib Malik is Unfit and Out of Form

Playing his last World Cup, Malik was thought to be one of the key performers but his poor one-day international form as of late is a huge cause for concern.

Since the start of the year, Malik has scored only 250 runs with the highest score of 60 from his 12 innings at an average of 22.72. His handy off-break bowling has also not been utilized by the captain as he has bowled only 14 overs during the time.

His short cameo against Australia was a clear reflection of a player who is out of form; shuffling to a full-pitched delivery. The following delivery, both his feet were stuck together and he played away from his body which led to the inside edge.

The biggest question which arises here is: why is the management including Malik as a batsman when he’s evidently out of form?

Green pitches often provide something extra for the bowlers, often seamers but spinners as well. Pakistan went into the game without a recognized spinner – leaving out Shadab Khan and Imad Wasim.

Similarly, Asif Ali is a good hitter of the ball but he lacks the technical ability to survive on a green-pitch, which was highlighted in his dismissal when he fell prey to Richardson’s cross-seamed delivery which bounced just a little more. Had Imad Wasim been in the team instead of Asif, he would have provided one additional bowling option and a similar contribution with the bat, if not more.

Shaheen Shah Afridi and Hassan Ali have both found it difficult to contribute with the bat. Although the duo picked up three wickets between them but their collective bowling performance has been rather poor; leaking runs and not bowling in the right channels. So why not Mohammad Hasnain?

Lastly, as discussed before, the inclusion of Shoaib Malik is a strange decision especially when he is struggling with his form. His fitness seems to be a problem as he did fail in the outfield on multiple occasions, which is very rare for him.

Mohammad Amir Back to His Best?

The only ray of hope for Pakistan was Mohammad Amir, a player who had been heavily criticized due to his inability to take wickets. The left-arm pacer managed to take a 5-for for just 30 runs from his 10 overs.

He managed to nip the bowl and also find a hint of swing. Yesterday was the first time Mohammad Amir picked up a 5-wicket haul in his ODI career, which should boost his morale.

With this performance, he has also silenced a lot of critics who were calling for his head when he was first included in the World Cup squad.

The modern cricket is accustomed to seeing the skippers taking charge for their respective teams. Seeing the likes of Virat Kohli, Kane Williamson and Aaron Finch, Pakistan fans are right to be disappointed in having Sarfaraz Ahmed.

Yesterday’s performance was a reflection of Sarfaraz’s personality and his confidence in his ability to see the game off. Chasing the game, Sarfaraz only hit one boundary throughout his innings and completely relied on Hassan Ali and Wahab Riaz to do the job.

He continued to rotate the strike and asked Wahab Riaz to score a boundary, which increased the pressure on him and he eventually lost his wicket.

Similarly, Sarfaraz Ahmed took the single on the last ball of the 45th over, which forced Shaheen Afridi to face Kane Richardson who had already dismissed Asif Ali earlier on.

His captaincy is also a talking point; keeping slips when it is not required, not asking bowlers to change their lengths and much more.

When analyzing all these things from a neutral perspective, Sarfaraz’s 40-run innings yesterday was all in vain as he failed to step up and play a captain’s knock. He chose to play a passive inning, one of many reasons why Pakistan cannot rely on him for much longer.

Pakistan have been on the lookout for a fast bowling all-rounder for a long time since Abdul Razzaq. Faheem Ashraf was the only one the management could find but his performances against England were extremely poor and he was eventually left out of the World Cup squad.

Hassan Ali played the best pull-shot and cover-drive of the day, which both went to the boundary whereas Wahab Riaz dug deep to convert two well-directed yorkers from Mitchell Starc into singles.

Both of them are already established bowlers and with additional work, it is evident that they can transition into becoming an even more valuable asset for Pakistan.