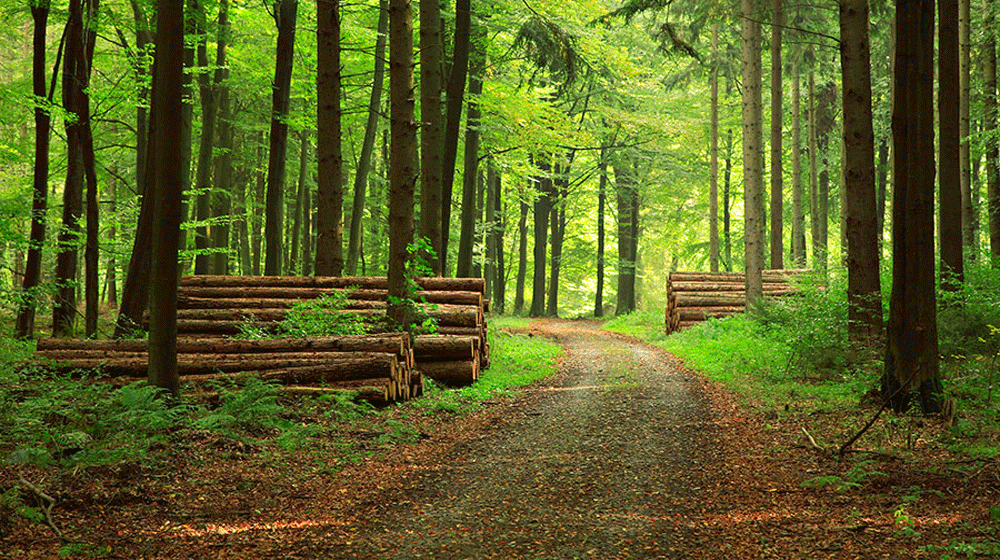 Pakistan is unfortunate when it comes to tapping its natural resources as forest contribution to the national economy stands at less than 1 percent which is the lowest in the region.

Pakistan’s forests’ economic contribution stands at 0.43 percent to the GDP, according to World Bank’s report “Forests For Green Pakistan.”

When comparing to others in the region, Pakistan comes out at the bottom:

Distribution of forests varies by province and other administrative areas. It is highest in Khyber Pakhtunkhwa followed by Sindh, Punjab, FATA. The share of forests stands lower in Balochistan, Azad Jammu and Kashmir, and Gilgit-Baltistan.

The limited forest resources have been unable to meet the demand for forest products in the country, which far exceeds the current level of sustainable domestic supplies.

The forestry sector contributes to Pakistan’s national economy by creating employment opportunities and generating taxes and revenues. However, such benefits are yet to be studied thoroughly and evaluated quantitively. Qualitatively, the sector provides forest products and related employment opportunities that are key to rural livelihoods and economic development.

For example, according to the Food and Agriculture Organization (FAO 2009), 68 percent of the country’s population depends on firewood as a major source of household energy and about 100,000 people are involved in the fuelwood trade, generating about Rs. 11.3 billion ($113 million) annually.

According to WB’s report, the major forest-based industries include paper, furniture, construction material, matches, sports goods, packing cases, and wooden articles. The full potential of small and medium forest-based enterprises has not been realized due to the unavailability of sufficient and quality raw materials.

The limited and decreasing forest resources have been insufficient to meet the demand for forest products in the country, which far exceeds the current level of sustainable domestic supplies

Farm forestry is an important alternative to meet the growing demands for fuelwood and timber. This helps decrease pressure on natural forests and thereby contributes to reducing deforestation and forest degradation of natural forests.

Besides official employment in forest departments, a large number of laborers are engaged in either year-round or seasonal forest management activities. Examples include raising and maintaining nurseries, preparing sites for planting, protecting planted stocks, weeding, cleaning, thinning, firefighting, and harvesting. In addition, a large number of people draw their livelihoods from farm forestry, processing of forest-based products, and ecotourism. In addition to the 100,000 people involved in the fuelwood trade, more than 500,000 workers are employed by forest-products industries such as furniture, village carpentry, matches, particleboard, plywood, fiberboard, boats, crates, boxes, paper, pulp, and chipboard.

Data shows that Pakistan’s forest resources have been decreasing and degrading over the last few decades due to unsustainable management and exploitation of available forest resources. Deforestation in natural forests is taking place at the rate of 0.75 percent, or 27,000 hectare per year.

During the last two decades, Pakistan lost 25 percent of its natural forests. Forest resources continue to deteriorate both qualitatively and quantitatively because of increasing pressure from a rising population and associated needs. Significant areas of forest lands have been transferred to non-forestry and commercial purposes, including agriculture, infrastructure, defense, and tourism. The coniferous forests are the most fragile and are rapidly declining because of their high-value timber.

Because of the low forest cover, Pakistan should make concerted efforts to increase its forest areas through natural regeneration, the reversal of land and forest degradation, agro-forestry, afforestation, and reforestation. Such activities may include establishing more nurseries in each province; making high-quality seedlings available; and introducing improved techniques and sustainable business models for seed collection, planting, and maintenance. The afforestation should focus not only on timber production but also on the resilience of landscapes and infrastructures, including roads, railways, and irrigation canals.

Forestation is The Only Way Forward

To support effective forest investments, the most urgent thing required in the country is to set up a system for collecting and analyzing data using consistent methods throughout the country.

Historically, the forestry sector has been a low development priority and has received limited investments. Budget allocations for this important sector are normally less than one percent of most provincial budgets. The launching of the ambitious Billion Tree Tsunami Afforestation Program ($150 million) in Khyber Pakhtunkhwa and the Green Pakistan Program ($36 million), however, show the government’s recognition of the importance of the forestry sector. This is also hopefully the beginning of needed policy shifts for the sector.

Long-term forest investments are required to harness the huge potential of forest contributions to resilient ecosystems, rural livelihoods, the national economy, and the global environment. In recent years the government has augmented its attention to forests, as demonstrated by the nationally determined contribution, the Green Pakistan Program, and the Billion Tree Tsunami Afforestation Program. Future support is needed to enhance and scale up these new and important initiatives in order to strengthen landscape management, reduce poverty and improve livelihoods, and foster private sector development.

The present government is aggressive to execute a massive forestation and plantation program countrywide as this long-term will not only enhance the economic contribution of forests in the GDP but it will also improve the worsening climate change situation in the country. Besides, mass-scaled jobs along with the business of different sized are likely to be generated through these projects.

It is high time for the masses and corporate sectors to contribute to the plantation and forestation drive of the government being the stakeholders of the country.