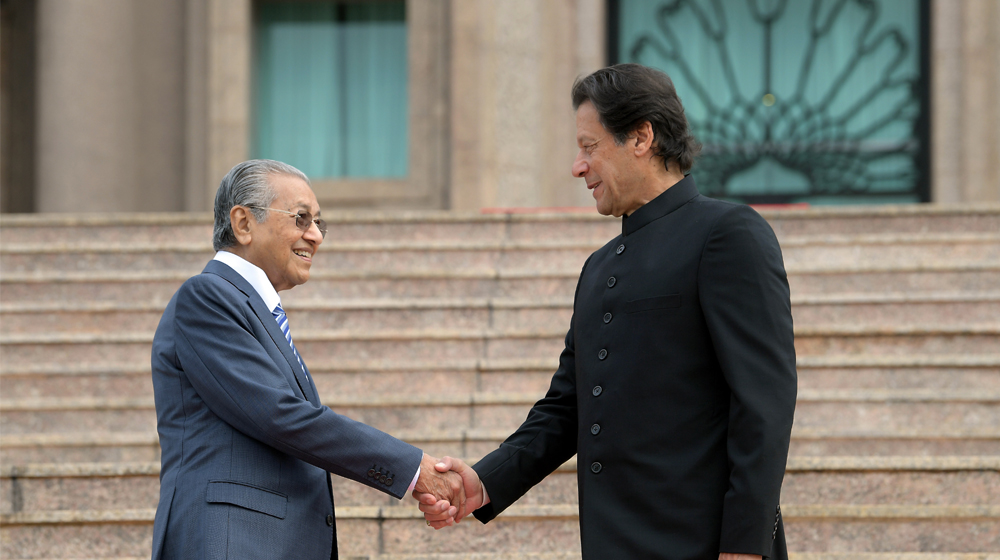 Pakistan and Malaysia have agreed to build a strong economic partnership and work together on issues affecting the Muslim ummah.

The two sides agreed for regular discussions to strengthen the trade and investment relations by removing barriers in key areas and develop links between the private sectors of two countries. Both sides also expressed commitment to build stronger ties in the areas of defense, law enforcement, tourism, and education.

Pakistan will try to compensate for the palm oil loss suffered by Malaysia after New Delhi imposed sanctions on trade with Kaula Lampur.

The Prime Minister regretted that India threatened Malasiya for supporting the Kashmir cause and stopped importing palm oil exports from them. He said that Pakistan will do its best to compensate by importing the Malaysian palm oil.

Imran Khan said that given the close affinity between the people of both countries, there is a lot of scope for further improving trade and economic relations.

He said the idea is to develop a much closer relationship and joint ventures in the defense sector.

The Prime Minister said he will attend the next Kuala Lumpur Summit and it will not affect Pakistan’s relationship with other Muslim countries. He said the forum will help promote unity amongst the Muslim ummah.

The two sides reaffirmed the commitment to ensure stronger collaboration in various ministries and agencies to enhance friendship and understanding.

Later, addressing a joint news conference along with the Malaysian counterpart, Prime Minister Imran Khan thanked Mahathir Mohamad for standing by Pakistan on the Kashmir dispute and speaking against the injustices by Indian forces in the region.

Imran Khan said that unfortunately, a very radical and extremist government has taken over in India which has put the Kashmiri people in an open prison.

We are working on a joint media that not only projects the positive image of Islam and fight Islamophobia but also educate the young Muslim generation about Islam.

In his remarks, the Malaysian Prime Minister said Pakistan and Malaysia have multifaceted relations and this visit of Prime Minister Imran Khan reflects the commitment to further promote these relations. He added:

We have set a stage for a new phase in the relationship saying his country will continue to foster and deepen relations with Pakistan.

We have agreed to increase the collaborative efforts to uphold the true values of Islam and promote the solidarity of Muslim Ummah.