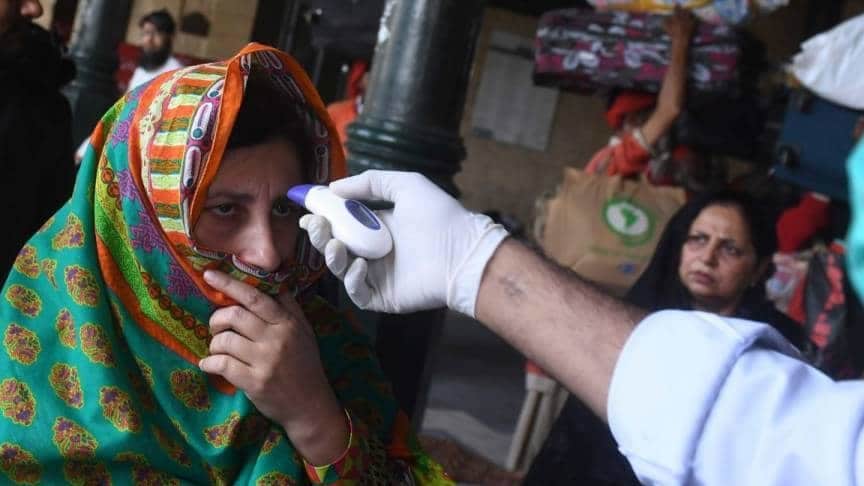 Alongside a constant spike in Covid-19 cases, the number of people recovering from the disease is also going up with over 2,000 recoveries recorded in the country so far.

With that said, the number of cases is Pakistan has already crossed 9,500 with Punjab alone recording a jump of 474 cases – its second-biggest single-day tally – in the past 24 hours. Virus deaths in the country have also climbed to 197 in Pakistan.

The global coronavirus total has now neared 2.5 million with fatalities passing 170,000. While the US remains the global hub of the pandemic, Italy sees its first fall of active coronavirus cases.

Although France became the world’s 4th country to record over 20,000 deaths from coronavirus infections, the number of people in intensive care fell for the 12th consecutive day.

The govt has announced the launch of an online portal – Ehsaas Ration Program – for a more streamlined distribution of essential items to the needy.

SAPM on Social Welfare Dr Sania Nishtar made the announcement informing that people who need such supplies would be able to submit a request on the portal.

The move, she said, came after it was observed that some areas received an ample supply of rations while others did not.

She also said that the govt would carry out wealth profiling and remove duplications, while requesting volunteers to assist people in filling the online forms.

The portal can be accessed at https://rashan.pass.gov.pk

Prime Minister Imran Khan has agreed to get tested for the coronavirus after meeting with someone who tested positive for the virus, Adviser to the Prime Minister on Covid-19 Dr Faisal Sultan has said.

WHO welcomes #UKaid's generous financial contribution to the #coronavirus response in Pakistan!

By working together, we can support the most vulnerable and slow the spread of #COVID19

Coronavirus very likely of animal origin, no sign of lab manipulation: WHO

The World Health Organization (WHO) said on Tuesday that all available evidence suggests the novel coronavirus originated in animals in China late last year and was not manipulated or produced in a laboratory.

U.S. President Donald Trump said last week that his government was trying to determine whether the virus emanated from a lab in the central Chinese city of Wuhan, where the coronavirus pandemic emerged in December.

“All available evidence suggests the virus has an animal origin and is not manipulated or constructed in a lab or somewhere else,” WHO spokeswoman Fadela Chaib told a Geneva news briefing. “It is probable, likely, that the virus is of animal origin.”

Pakistan to send chloroquine tablets to US, Saudi Arabia among others, says Awan

The cabinet has decided to send 1 million chloroquine tablets to Saudi Arabia and United States each, 500,000 to Turkey and Italy each, 5m to the United Kingdom, 700,000 to Kazakhstan and 300,000 to Qatar following some encouraging results in treating the coronavirus.

SAPM Firdous Ashiq Awan announced the decision in a press briefing. She said the step would “improve Pakistan’s credibility and face value”.

Iran’s judiciary said on Tuesday (Apr 21) that it has temporary released more than 1,000 foreign prisoners due to the novel coronavirus outbreak, following criticism by UN human rights experts.

“What Iran has done in guaranteeing prisoners’ health and granting furlough to them is a significant move” compared with what other countries have done, said judiciary spokesman Gholamhossein Esmaili.

British-Iranian woman Nazanin Zaghari-Ratcliffe, arrested in 2016 and serving a five-year jail term for sedition, was among 100,000 prisoners temporarily released in March.

The Consulate General of Pakistan in Dubai shut down its ticket counter as Pakistanis complained of expensive tickets.

The enraged people also exchanged heated words with the staff at the consulate. After the counter was closed, Pakistani nationals expressed concern regarding buying of tickets to return home.

On the request of Imam-e-Kaaba, Sheikh Abdul Rehman Al Sudais, the Saudi government has allowed offering Taraweeh in  Haramain Shareefain.

The top cleric announced this in the wee hours of Tuesday, saying that only 10-Rakaat Taraweeh prayers will be offered in both Masjid al Nabvi and Masjid al-Haram throughout Ramadan.

He added that the holy mosques, however, will not be opened for public and the congregation will only be attended by the servants of the Haramain.

Indonesia will ban the mass exodus tradition, locally known as mudik, at the end of the Muslim fasting month in May in a bid to curb the spread of coronavirus in the country, President Joko Widodo said on Tuesday.

Indonesia’s tally of 590 virus deaths is the highest in East Asia after China, but Joko had previously resisted a ban, seeking instead to persuade people to stay put.

But health experts had warned that allowing millions in the world’s biggest Muslim-majority country to travel to their home villages after Ramadan could hasten the spread of the disease.

Global hunger could double due to COVID-19 blow: U.N.

The number of people facing acute food insecurity could nearly double this year to 265 million due to the economic fallout of COVID-19, the United Nations’ World Food Programme (WFP) said on Tuesday.

The impact of lost tourism revenues, falling remittances and travel and other restrictions linked to the coronavirus pandemic are expected to leave some 130 million people acutely hungry this year, adding to around 135 million already in that category.

“COVID-19 is potentially catastrophic for millions who are already hanging by a thread,” said Arif Husain, chief economist and director of research, assessment and monitoring at the World Food Programme (WFP).

The Sindh High Court issued a notification for work hours during the month of Ramzan, which is set to begin from the end of April.

The same will be applied to lower courts.

Sindh’s coronavirus death toll has climbed to 66 as the province reports 5 new deaths.

As many as 289 new virus cases were also reported in the province taking its tally to 3,053.

The following information is relevant to assess the situation of #COVIDー19 in Sindh as of 21st April at 8 AM:

In the last 24 hours, 30 people have recovered from corona in Sindh

Leading philanthropist, Faisal Edhi, has tested positive for coronavirus. According to the reports, Abdul Sattar Edhi’s son was tested for novel coronavirus two days ago and his report has been confirmed to be positive.

Speaking to a local news outlet, Faisal Edhi’s son, Saad Edhi has said that his father started suffering from COVID-19 symptoms after meeting with Prime Minister, Imran Khan. Faisal Edhi met with PM Khan a few days back to present a cheque of Rs. 10 million for the Corona Relief Fund.

As seen in the pictures, both Imran Khan and Faisal Edhi were not wearing masks. It is still unknown how Faisal Edhi got the virus, however, Imran Khan has since met a number of people including President Arif Alvi, ISI Chief, Lt. General Faiz Hameed, Jazz CEO Aamir Ibrahim, and Telenor CEO Irfan Wahab to name a few.

Faisal Edhi, the head of the renowned charity organization, Edhi Foundation, has tested positive for the coronavirus.

The son of the legendary philanthropist Abdul Sattar Edhi had taken a test for the novel coronavirus two days ago. Edhi had been busy with the charity work during the coronavirus crisis and currently is in Islamabad, according to his family.

Following the test results, Faisal Edhi has gone into self-isolation.

WHO warns rush to ease virus rules could cause resurgence

The World Health Organization said Tuesday that rushing to ease coronavirus restrictions will likely lead to a resurgence of the illness, a warning that comes as governments start rolling out plans to get their economies up and running again.

“This is not the time to be lax. Instead, we need to ready ourselves for a new way of living for the foreseeable future,” said Dr. Takeshi Kasai, the WHO regional director for the Western Pacific.

He said governments must remain vigilant to stop the spread of the virus and the lifting of lockdowns and other social distancing measures must be done gradually and strike the right balance between keeping people healthy and allowing economies to function.

Asymptomatic Covid-19 patients suffering from other ailments can fast: experts

Health and medical science experts on Sunday agreed that Covid-19 patients with no symptoms, even if they were diabetic, could fast in Ramazan in consultation with their physicians while maintaining social distancing, staying at home, drinking plenty of water after Iftar and taking their medicines regularly.

The national and international experts said there were thousands of Covid-19 patients who were asymptomatic and in self-isolation at homes in Pakistan and other countries of the world.

They could fast safely, but they should keep in touch with their physicians, take their medicines regularly and remain hydrated after Iftar till Sehr, they advised while addressing the ‘International Diabetes and Ramadan Online Conference’ organised by Baqai Institute of Diabetology and Endocrinology (BIDE).

Mask is the new norm, like putting on a shirt.

Lockdown restrictions extended till May 5 in Balochistan

The govt in Balochistan has pushed the lockdown restrictions to May 5 according to a notification shared by the provincial govt.

“Restrictions imposed earlier will continue till May 5. The inter-city and inter-district transport will continue to remain suspended and a ban in public gatherings of more than 10 people will continue in the province,” the notification said.

Immigration to US to be suspended amid pandemic, Trump says

President Donald Trump has said he will sign an executive order to temporarily suspend all immigration to the US because of the coronavirus.

On Twitter, he cited “the attack from the invisible enemy”, as he calls the virus, and the need to protect the jobs of Americans, but did not give details.

In light of the attack from the Invisible Enemy, as well as the need to protect the jobs of our GREAT American Citizens, I will be signing an Executive Order to temporarily suspend immigration into the United States!

It was not clear what programs might be affected and whether the president would be able to carry out the order.

PIA chief says fares to be rationalized after complaints

The Pakistan International Airlines (PIA) has promised to ‘rationalize’ its fares, following complaints by passengers they are being overcharged for special flights.

Air Marshal Arshad Malik, the chief executive officer (CEO) of the PIA, held out the assurance that he would look into the assertion of overcharging based on high operating costs associated with these flights.

The national flag carrier has recently been facing complaints of high fares and Ghulam Sarwar Khan, the minister for aviation, took up the case with the CEO in a meeting in Islamabad on Monday.

The World Health Organization has recognized a worrisome trend of infections among healthcare workers in the Philippines and is working closely with the country’s health ministry on ways of addressing it.

Abdi Mahamud, the COVID-19 incident manager for the Western Pacific region, said that as many as 13% of cases in the Philippines were health workers although there was no exact data to explain that.

He told a briefing that it could be linked to the availability of personal protective equipment and levels of exposure to the coronavirus among infected individuals in the Philippines, which has 6,459 cases and 428 deaths.

Germany and other parts of Europe took tentative steps to ease lockdown measures on Monday but officials warned the battle against the coronavirus pandemic was far from over.

Some shops reopened in Germany and parents dropped their children off at nurseries in Norway as tight restrictions in place for weeks were lifted in parts of the continent.

After being hit hard by the virus that first emerged in China late last year, Europe has seen encouraging signs in recent days, with death rates dropping in Italy, Spain, France and Britain.

Punjab recorded as high as 474 new virus cases in its second-biggest daily jump. The provincial tally now stands at 4,195.

The province also recorded 3 new deaths with its toll climbing to 45.