The weekly new coronavirus cases in Pakistan have dropped for the fourth consecutive week in a row.

Weekly deaths also decreased by 18% with 504 new deaths from all across Pakistan, compared to 595 deaths that were reported last week.

Check the following graphs before we dive into a discussion on the stats in more detail. 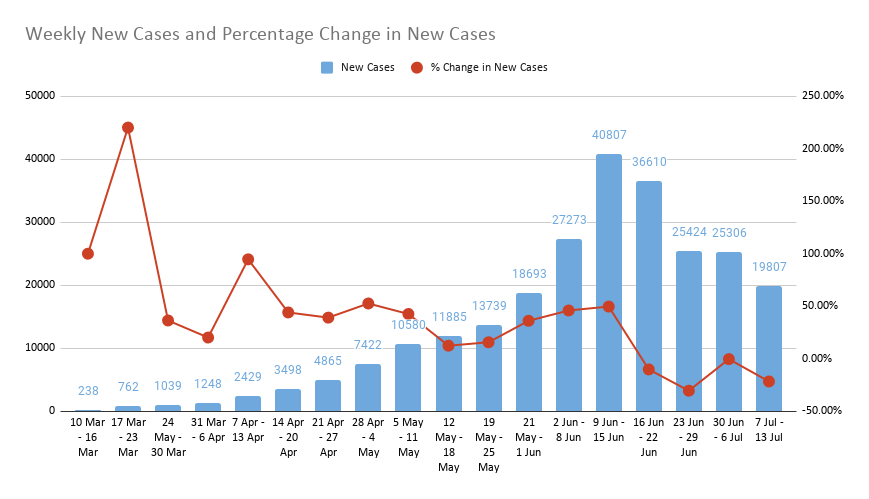 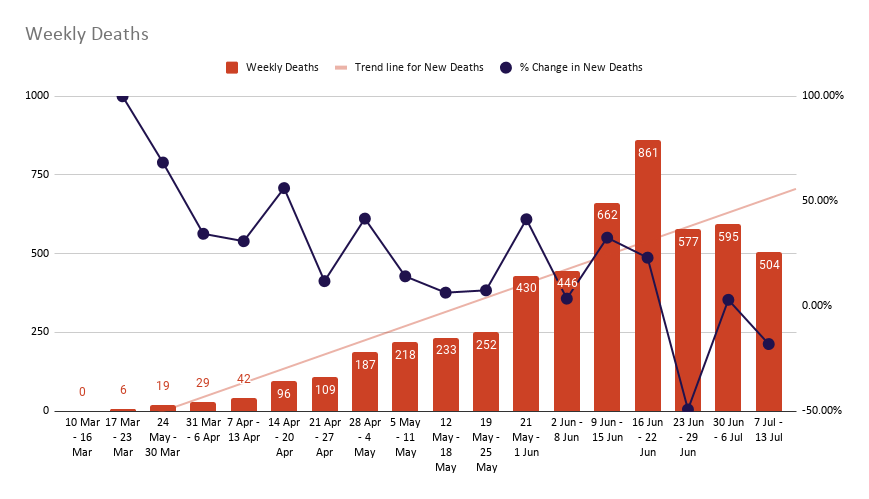 It can now be said with certainty that the peak is over as the number of new cases has been dropping for four weeks.

This is very encouraging when you consider the fact that Pakistan doesn’t have a strict lockdown in place.

Moreover, international flights are also allowed — with pretty much no testing — but it’s clearly not impacting the severity of the situation.

Another very encouraging factor is that under-reporting or unreported cases are very unlikely. We say this because the number of daily ICU admissions has now dropped to 1,837, down from almost 4,000 a month ago.

In my opinion, ICU admissions are important because they are the true depiction of the outbreak. There could be cases that are asymptomatic, or even cases that are symptomatic but not severe that could go unreported, but severe cases are highly likely to get reported as such patients need hospitalization and they are left with no option but to turn to hospitals.

Punjab seems to have outperformed all other regions during the week, as its new cases dropped by around 30%. Below is the week over week growth (or negative growth) in new cases for all regions:

Clearly, all regions showed a drop in cases except KP where weekly new cases were almost the same as last week. This essentially means that all regions are demonstrating a decline in cases in parallel.

Below graphs will give you more clarity on how all regions performed: 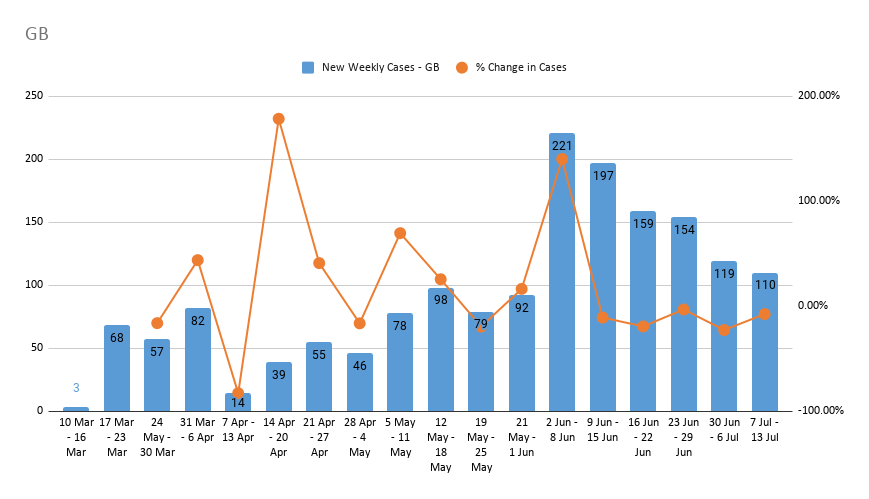 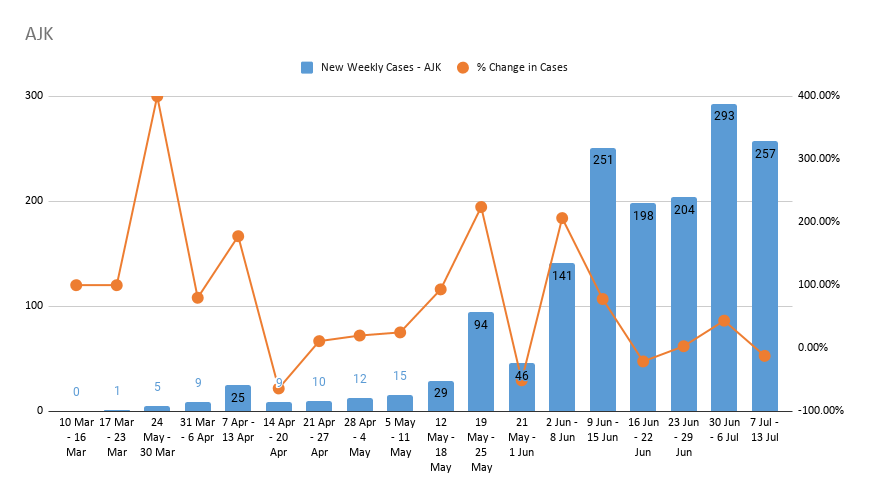 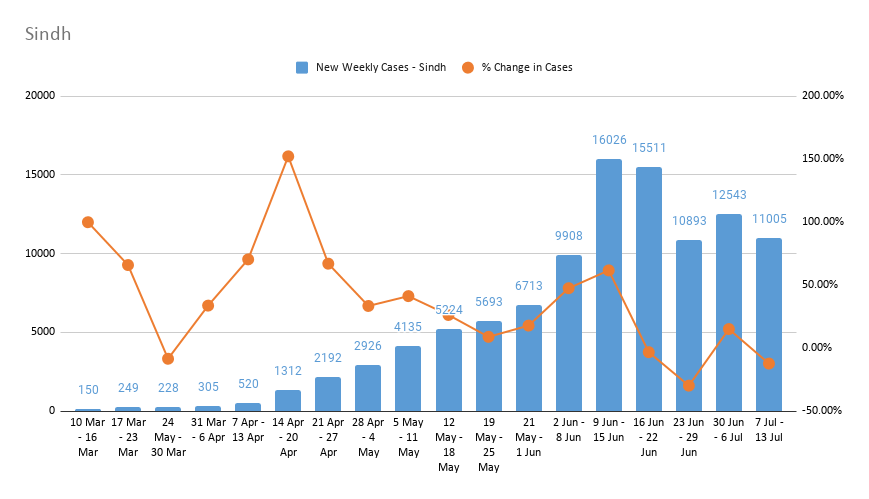 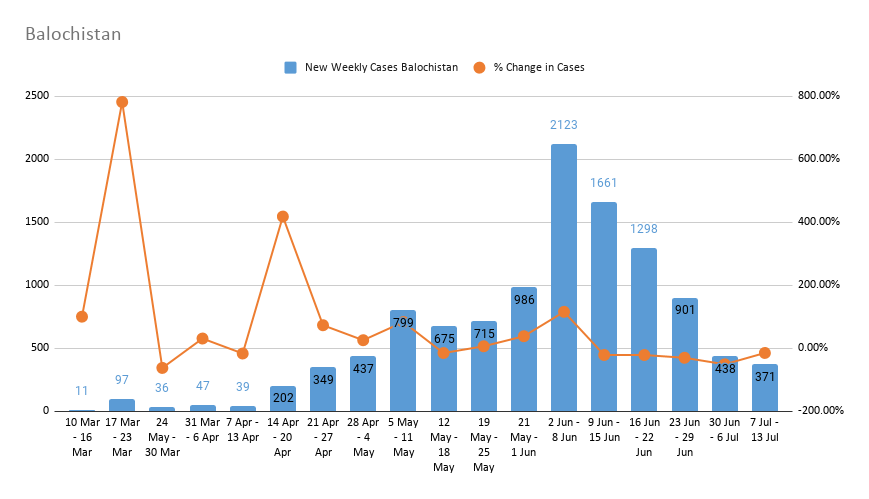 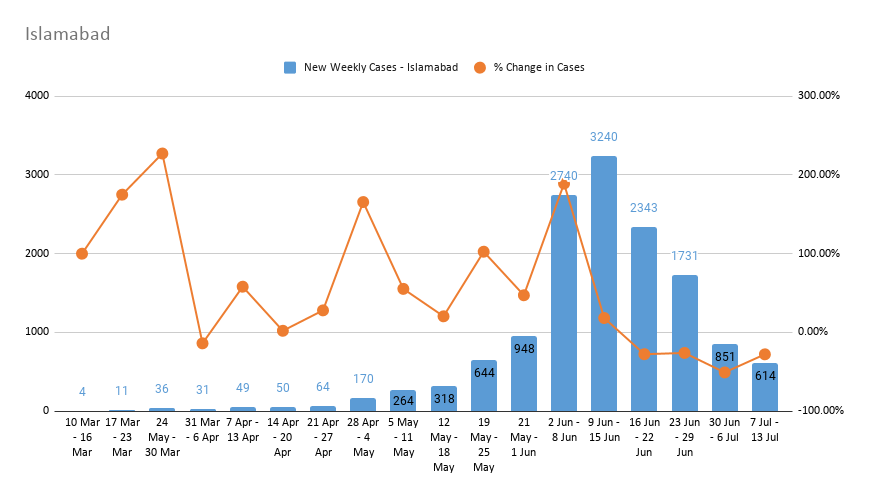 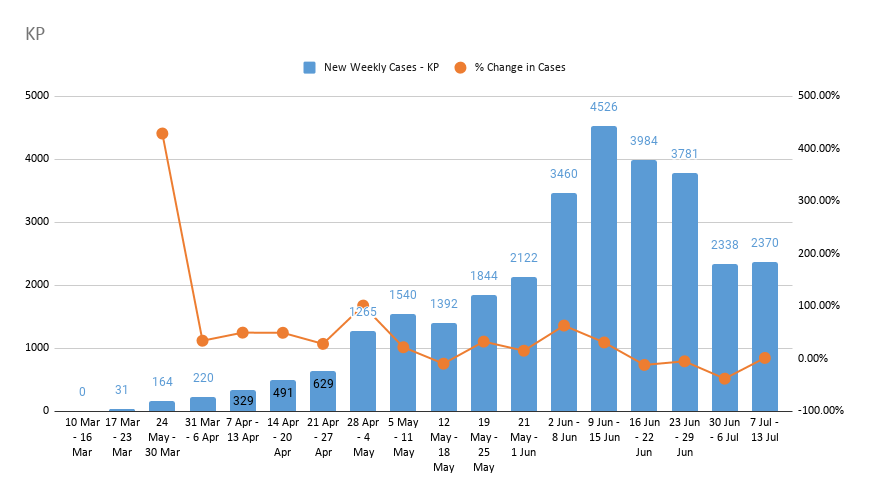 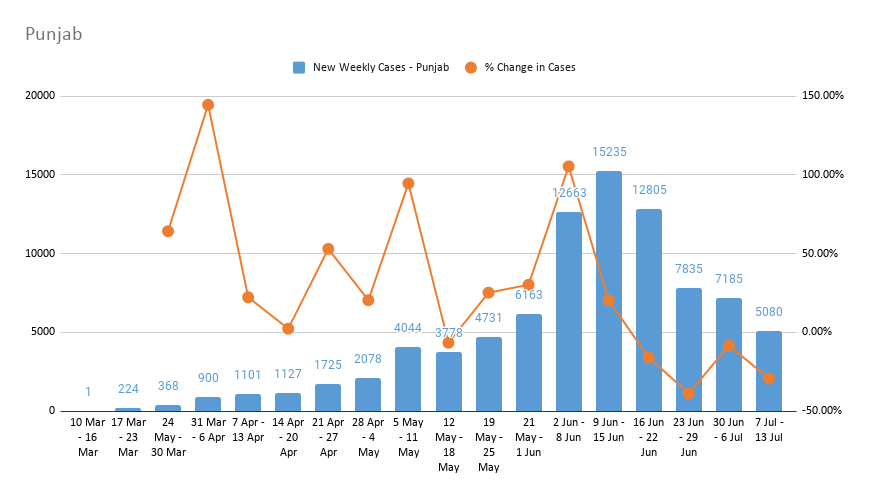 Is the Drop in Cases Natural?

While there are many theories on why the outbreak wasn’t severe in Pakistan, there is no research or data to conclude why we saw a low fatality rate or the drop that we are now seeing in new cases.

While the government can take all the credit it wants, the fact of the matter is that the drop in cases happened naturally.

Markets, for instance, are still overcrowded, and social distancing is not practiced for the most part. Businesses are open and so are a lot of offices. Religious activities are happening as normal, public transport (where passengers sit side by side) is ongoing, international flights are being allowed without testing, and life is pretty much back to normal for over 98% of Pakistanis.

Despite all these things, if cases are still dropping then it means the drop is happening naturally and no outside intervention played a role.

Yes, the so-called smart-lockdowns could have played a role, but again the implementation we have seen for the smart lockdowns isn’t optimal.

While we see a lot of people wearing masks, they aren’t wearing them properly. For instance, the majority of individuals wear a mask, take it off, touch it excessively, and keep them in pockets and reuse them for a very long period of time. That indicates that masks aren’t the real reason behind the containment either.

Also, the number of people who use mask are very small and they are in major cities only. A large part of Pakistan doesn’t wear a mask at all.

If not masks, then we don’t see any other intervention that’s containing the disease.

So it’s more because of our demographics, such as age group, our behaviors, our lifestyle, our excessive exposure to viruses before COVID-19, the way we use of spices for instance (explained below), or any other reason due to which cases either had mild severity or didn’t occur at all.

It bears mentioning that our diet could be part of the reason COVID-19 wasn’t as severe in Pakistan. We consume garlic, turmeric (haldi), ginger, cinnamon, onion, tomato, etc. on a regular basis and they are very healthy, with antiviral, anti-bacterial, anti-oxidants and other properties. They all increase your immunity a great deal.

While things are getting better, but as with many other countries, a second wave is feared in Pakistan as well.

This isn’t expert opinion but we think that a second wave is highly unlikely here because there was no outside intervention involved in containing the disease.

Second waves usually happen when there’s an intervention (lock-downs for instance) to contain a disease and when the intervention is removed, the spread of virus happens again.

In Pakistan, however, the spread was technically allowed and the cases still dropped. That means there’s a natural reason behind the drop which is likely to persist and help us avoid a second wave.

One factor that might have played a part is the weather and that would be bad news for Pakistan since it’s expected to change over the next couple of months and it’s one of the few scenarios where a second wave might still happen. However, that’s unlikely as other countries have similar weather and that didn’t help them contain the outbreak. 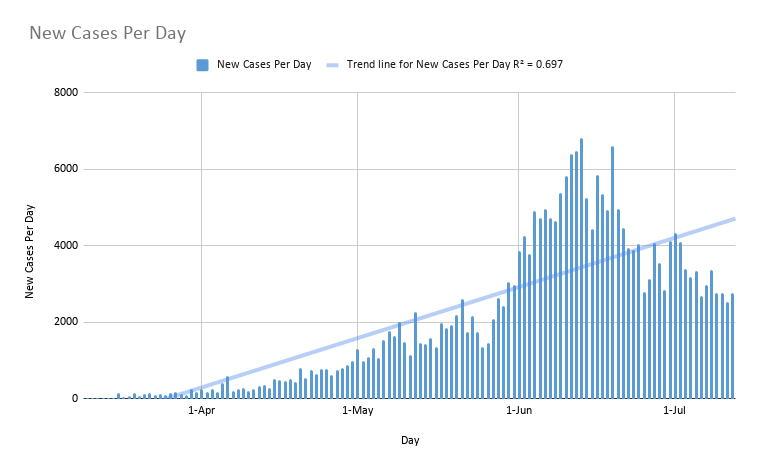 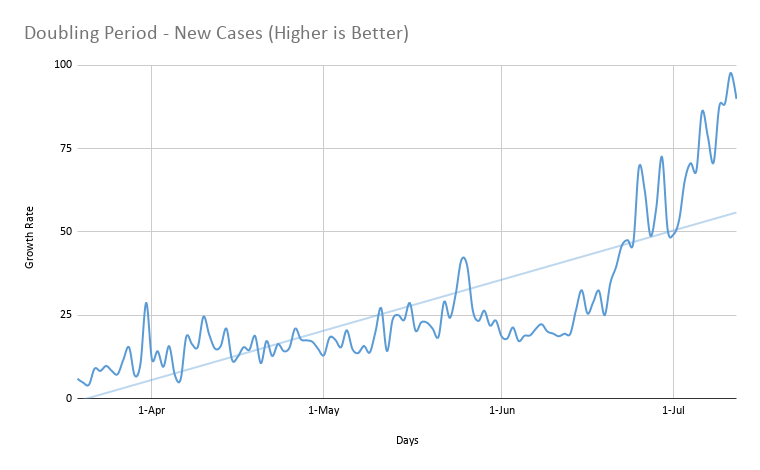 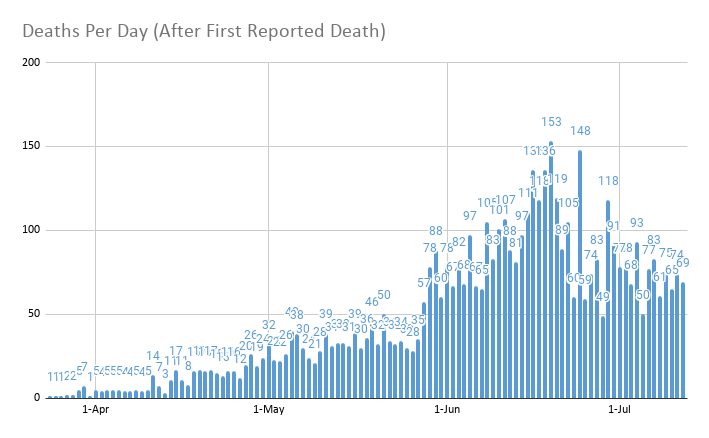 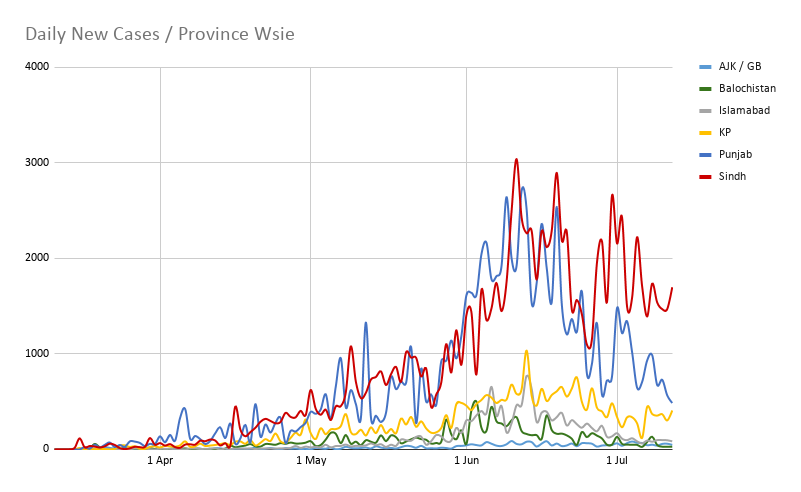 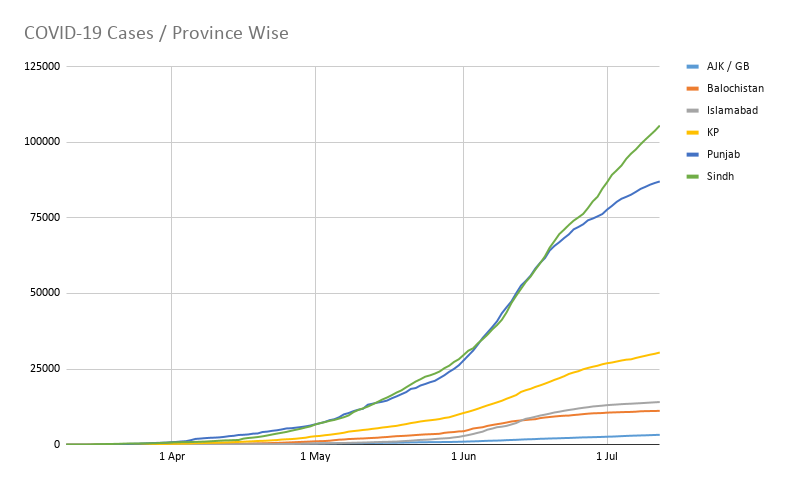 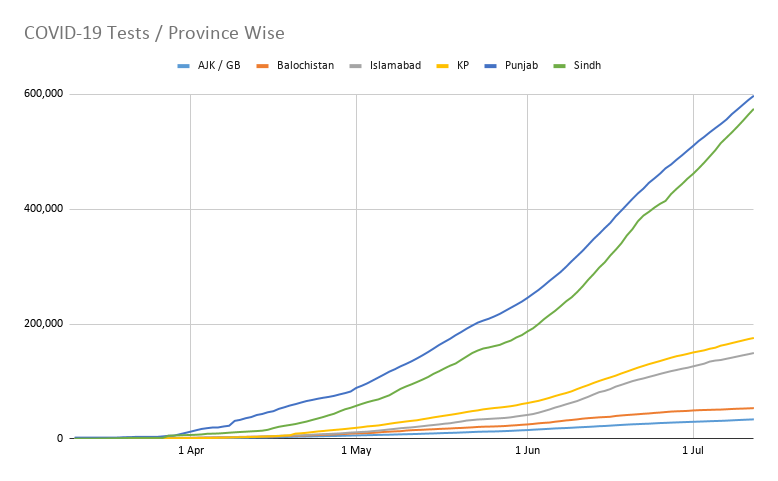 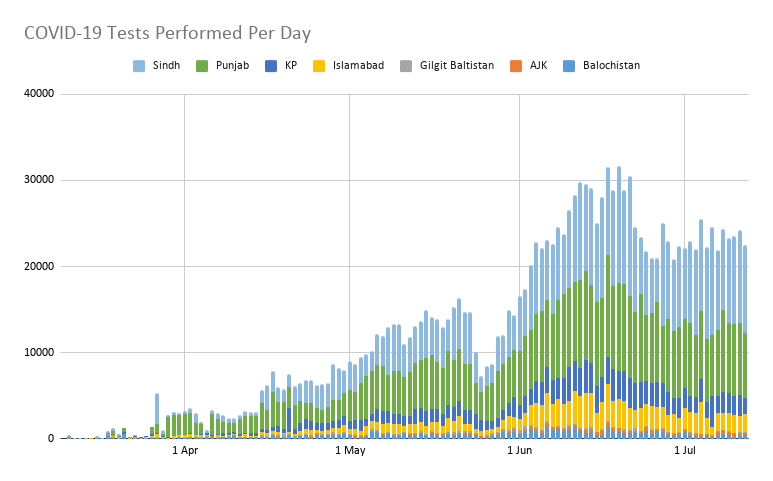