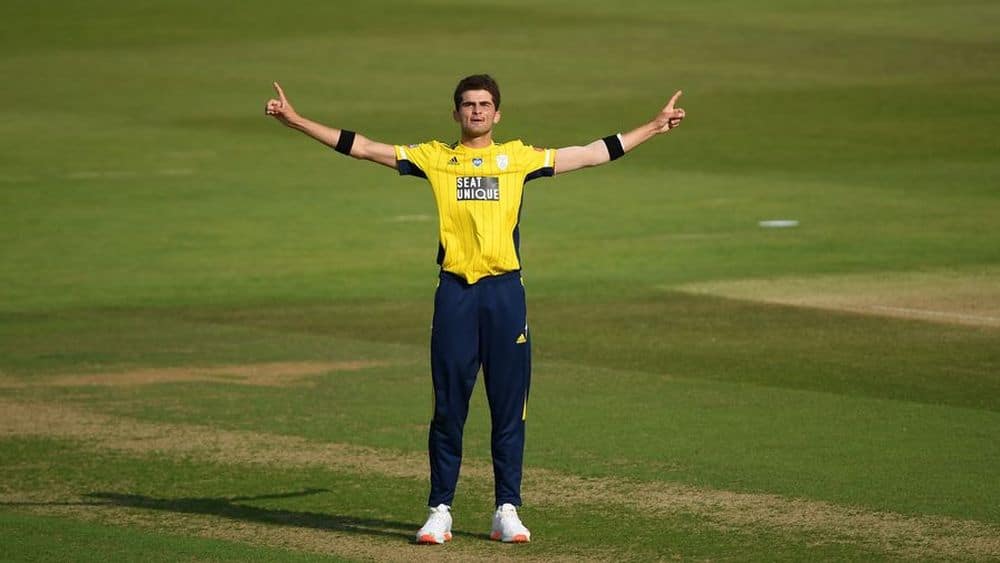 Sunday evening belonged to Pakistani cricketers in England’s T20 Blast as Shaheen Afridi and Imad Wasim won man of the match awards in their respective games while Babar Azam scored a good-looking 42 albeit in a losing cause.

Shaheen Afridi wreaked havoc with the ball while defending a sub-par total as he claimed 6 wickets for 19 runs in his 4 overs, helping his team end their losing streak. Although his team is out of the quarter-finals, Shaheen took 4 wickets in 4 balls to become the first Pakistani pacer to achieve the feat. He is the 6th bowler overall to have done the same.

Shaheen’s 6-19 is the best bowling figure by any Hampshire bowler and he is only the second bowler for the club to take a hat-trick in the shortest format. He uprooted the stumps of John Simpson, Steven Finn, Thilan Walallawita, and Tim Murtagh in consecutive balls to achieve the rare feat as Middlesex were bowled out for 121.

On the other hand, Imad Wasim scored an unbeaten 26 followed by figures of 2-24 and two run-outs to steer his team to victory over Durham. His team, Nottinghamshire (Notts) Outlaws have also qualified for the quarter-finals after topping the North Group with 16 points.

Durham are 67 adrift and listing, with only two wickets remaining.

Imad Wasim claims his second scalp of the over, with Durham 37-3.

In a Central Group fixture, Babar Azam’s Somerset lost against Gloucestershire by 2 wickets in an all-important clash. Babar’s 42 were in vain as Somerset failed to qualify for the quarter-finals with a slight margin.