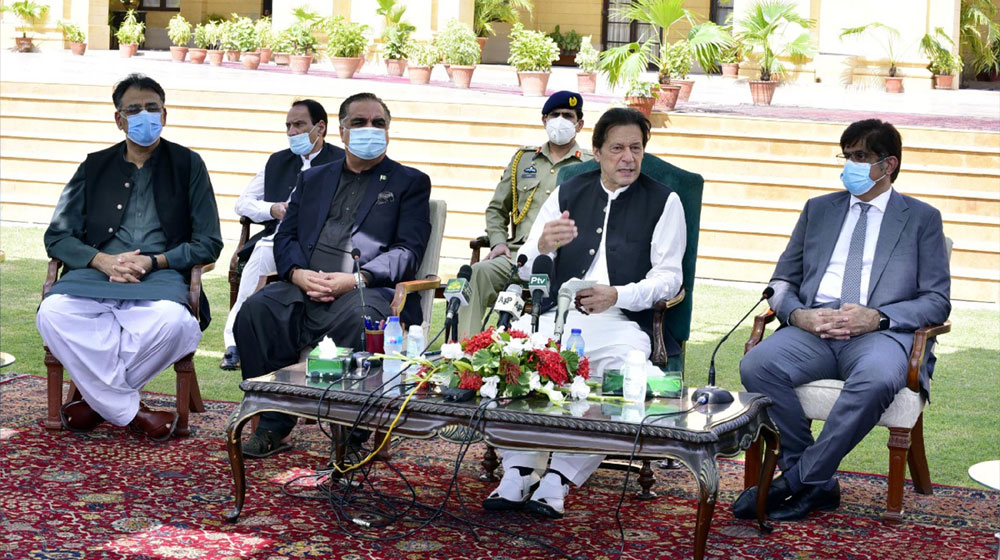 On Saturday, Prime Minister Imran Khan announced an Rs. 1100 billion packages for Karachi’s transformation in a joint press conference with Chief Minister Sindh, Syed Murad Ali Shah, and Governor Sindh Imran Ismael. The collaboration between the two rival parties for the sake of Karachi was hailed as a significant breakthrough and raised people’s hope.

However, the consensus showed during the presser began to fall through on the same evening when Bilawal Bhutto told on a TV show that the provincial government will contribute Rs. 800 billion – about 75 percent of the total package – while the federal will provide the remaining Rs. 300 billion.

Umar refuted Bilawal’s claim that the Sindh government will pay Rs. 800 billion for Karachi’s transformation plan, and said that the facts are otherwise.

It is necessary to set the record straight. The federal government will bear 62 percent of the total amount of Rs. 1,100 billion announced by Prime Minister Imran Khan for Karachi while the provincial government will spend the remaining 38%.

Asad said Karachi package is the right of the people of this city, and there should be no politics on this.

For God’s sake, serve this city…we will take two steps towards you if you take one step towards us.

It is impossible to remain silent when the other party attempts to manipulate facts for political gains, he added.

On Sunday evening, Sindh government spokesperson, Senator Murtaza Wahab, told a private TV channel that out of the total amount, Rs. 750 billion is the provincial government’s responsibility, and the federation will pay the remaining amount.

I believe the percentage Asad Umar claimed, 62 percent of the total package, in his press conference is wrong.

He said that the Sindh government is thankful for the federation’ contribution to the uplift of the port city.

Speaking about the Karachi Transformation Plan, Asam Umar said that a large sum of the total amount will be spent on cleaning all storm-water drains of the city and anti-encroachment around them. He added that the rehabilitation of affected people will be the Sindh government’s responsibility.

Reflecting on three federal-funded projects in the country’s financial capital, the minister said Green Line Bus Rapid Transport System will complete in June 2021; the K-IV water supply project will be completed by the end of 2022, while the Karachi Circular Railway will be functional by the end of 2023.

Here is the breakdown of the Karachi package: