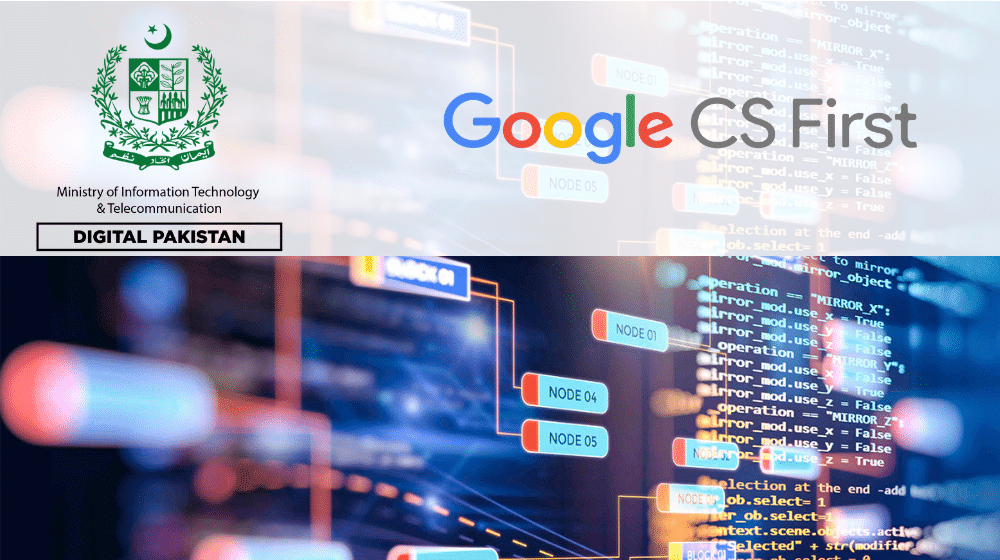 Ministry of Information Technology and Telecommunication, along with Tech Valley Pakistan, Telecom Foundation and Virtual University has launched a nationwide program with Google to help kids learn coding along with other IT skills.

A ceremony in this regard held at the committee room of the Ministry of IT and Telecommunication on Wednesday.

Federal Minister for IT and Telecommunication Syed Amin Ul Haque inaugurated the Google CS First Programme. Secretary IT Shoaib Ahmad Siddiqui was also present on the occasion.
CS First is an early age coding program for kids aged between 9 to 14 and consists of a free computer science curriculum that makes coding easy to teach and fun to learn through video-based activities, with different themes like sports, art, and game design.

“CS First Program is the comprehension of Prime Minister Imran Khan’s vision of Digital Pakistan and is an important stepping stone in introducing digitalization in Pakistan”, said Syed Amin Ul Haque, Federal Minister for IT and Telecommunication. He said CS First Program will prove to be the best platform for Pakistani students.

The platform which will be used in this regard is “Scratch”, a specialized tool researched and developed by MIT. As an official Google partner, Tech Valley Pakistan will assist the MoITT with the roll-out of the program, starting from the Telecom Foundation schools.

The Federal Secretary MoITT, Shoaib Ahmed Siddiqui emphasized, “CS First Program is just the stepping stone and the MOITT envisages a country digitally equipped with IT skills that will lead the next generation of technology pioneers and developers”.

Tech Valley being the official trusted country partner for Google for Education, Google Cloud and Google Workspace, has localized global CS First curriculum to suit the Pakistani context, has developed a detailed plan of implementation and has liaised closely with Google’s global CS First team in California to ensure they are fully up to speed on the curriculum.

Umar Farooq, CEO Tech Valley Pakistan said, “We have been working with Google in Pakistan since 2017. We want to help the youth of this country to better understand the importance of digital skills and realize the dream of a digital Pakistan”.

Google has made the implementation of the ‘CS First’ program one of its top priorities in Pakistan. In this regard, Farhan S. Qureshi, Head of South Asia at Google stated, “We remain fully committed to the program, and we appreciate the support of the Ministry of Information Technology and Telecom, the Telecom Foundation, and the Virtual University.”

In the initial phase of the program, the Telecom Foundation Schools will benefit from this initiative and pass on this digital literacy to the underprivileged and low-income households within its mandated segment. It will be piloted to the students of the TF schools covering three cities i.e. Karachi, Islamabad and Lahore. The program will be mainly divided into two parts; Train the Trainer followed by an orientation of students on the said platform.

Regarding the Google CS First program, Syed Zomma Mohiuddin, Managing Director of Telecom Foundation said, “Telecom Foundation embarked upon a transformational educational initiative last year under the name of SEED, which will ensure an expansion in the number of its schools for the underprivileged children as well as uplifting of their facilities and most importantly their digitalization. The Google GS First has come as a great and timely stepping milestone in the accomplishment of the SEED project where it will create the possibility for the underprivileged children to become part of the country’s digital economy”.

Moreover, Virtual University is to provide necessary facilities in their campuses for training the teachers and the students regarding the introduction of the CS First Program in Pakistan and providing on-ground support towards the deliverance of the program.

“Virtual University has always been a huge promoter of technology and education in Pakistan. We are delighted to become the official part of this Google program that will further help us in playing our role in promoting online education,” said Ehsen Puri, Director of Virtual University.