The current account recorded a massive deficit of $662 million in December 2020 after showing a surplus during the previous five months. This is despite record inflows of foreign exchange income from the sources of export and remittance.

The deficit was driven mainly because of the heavy import bill with the weightage of a section of essential food items, growth-enhancing capital goods, oil, and industrial raw materials also rose on the back of the domestic economic recovery.

In December 2020, the exports receipt showed a record value of $2.352 billion. Besides, inflows of remittances also registered a handsome value of $2.43 billion. On the other hand, imports of the country grew to a record level of over $5 billion.

Analysts anticipate that the ballooning import bill will offset the impact of handsome export receipts and remittances inflows which may settle the overall current account position into deficit by the end of the current financial year.

As the economic recovery is marching towards normalcy, the import pressures would naturally kick in as the economy expands in low-interest rates. No sign of panic yet but back to base case of $5-6 billion of annual current account deficit. Resultantly, the Rupee may face minor pressures after a few months of deficit. There is no need to tighten the monetary policy yet.

The central bank in its recent quarterly report also predicted that the deficit of the current account may swell to 0.5% to 1.5% of the GDP by the end of the full financial year.

It also estimated that import bill may swell to $43-$44 billion whereas inflows through exports and remittances may surge in the range of $23-24 billion and $24-$25 billion.

Some of the analysts view that exports and remittances may well beyond the prediction which will be enough to maintain the current account in the surplus.

Despite a jolt of a huge deficit of $662 million, the overall current account remained in surplus of $1.1 billion in the first half of the financial year 2020-21, which is a historical record.

According to Capital Stake, for the first time in the past decade, Pakistan recorded a current account surplus for two consecutive quarters. 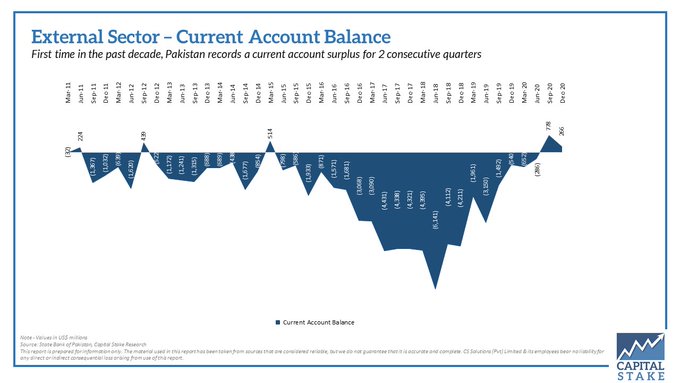 In the last financial year, the current account recorded a deficit of $2 billion in the first two quarters.

During the period of Jul-Dec 2020, the trade deficit of goods and services stood at $12.3 billion as against of $11.4 billion deficit of the same accounts reported in the last financial year.

Remittances maintained a major and positive difference during the period. It stood at $14.2 billion during July-Dec as compared to $11.3 billion reported in the same period of the last year.

Pakistan and Italy to Increase Bilateral Trade Volume to $5 Billion

The overall situation of the first two quarters seems comfortable as far as the current account is concerned, however, the next two quarters may prove challenging for the government to maintain the surplus or minimal deficit.