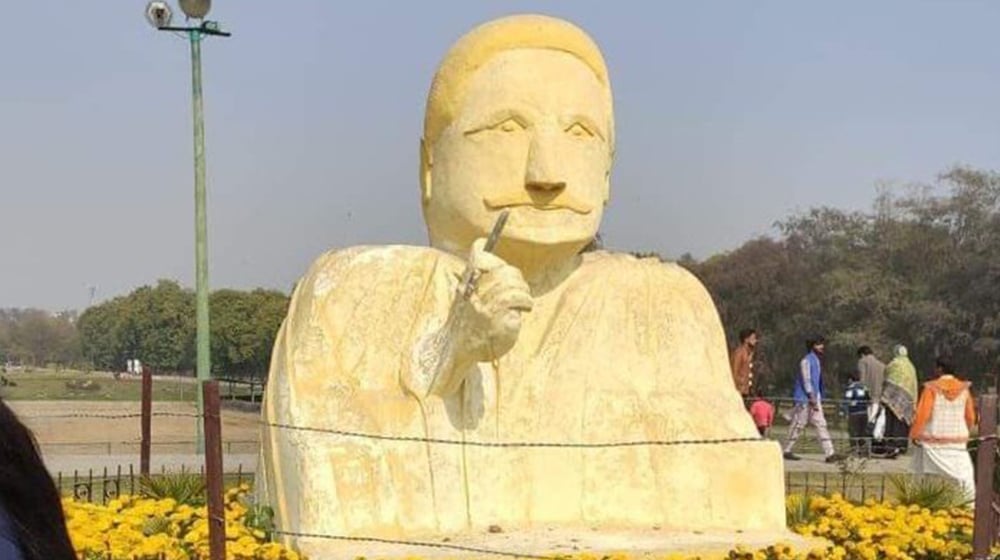 Two officers of Parks and Horticulture Authority (PHA) Lahore have been relieved of their duties over an issue pertaining to an oversized bust of Allama Iqbal at the Gulshan-e-Iqbal park.

Twitterati had a field day with an outpouring of annoyance with the ‘not-so-accurate’ sculpture. Some speculated that it was the work of amateur architects, but Ghulam Sibtain told a news outlet that the PHA “did not hire an architect to make the statue, but two gardeners worked on it”.

He further clarified that state money had not been spent on the project, and said,

I requested some elderly people who come to the park daily to help us with funds in the making of this statue. We bought cement with the collected funds and used iron rods and wood dumped in the park.

The former PHA official argued that his team had only “completed the left side of the statue but the right side remains incomplete. The statue is not yet accurate. We wanted to paint it golden but it remains in its white unfinished form”.

Punjab’s Chief Minister, Sardar Usman Buzdar took notice of the situation, stating that the inapt placement of the statue was a “sign of negligence”, and ordered the city regulators to take immediate action against the concerned officers.

Parks and Horticulture Authority (PHA) Lahore promptly dealt with those involved in the project and removed the offensive bust that was intended to be in the likeness of the national poet.