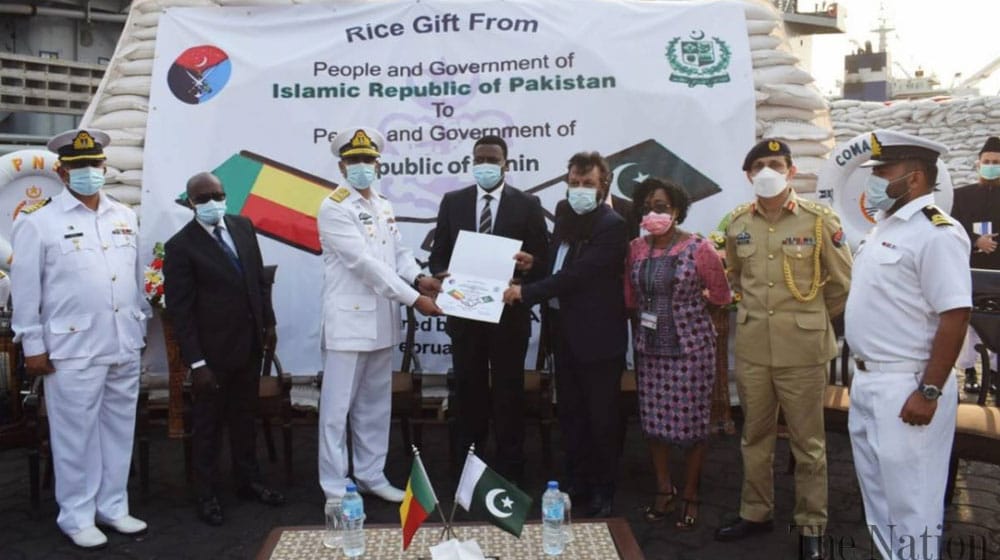 Pakistan Navy Ship NASR visited Cotonou Port of Benin as part of the Humanitarian Assistance and Disaster Relief (HADR) mission to African countries. Upon arrival at Cotonou, PNS NASR was received by Ambassador of Pakistan at Niger, Ahmed Ali Sirohey, along with Honorary Consular of Pakistan, Defence Attache of Pakistan in Nigeria, and host naval officials.

Previously, the ships also visited Djibouti and Sudan ports during the deployment. As a gesture of solidarity and friendship, PNS NASR delivered food aid to Niger and Benin during ceremonies held at Port Cotonou.

The events were attended by high-level government and military officials of Niger and Benin including Deputy Minister for Humanitarian Assistance and Disaster Management of Niger, Deputy Director of Benin Presidency Office, Ambassador of Niger at Benin, General Secretary of Ministry of Foreign Affairs of Benin, and Ambassador of Pakistan to Niger.

The officials of both countries paid special tribute and thanked the government of Pakistan and the Pakistan Navy for the kind gesture and provision of humanitarian assistance. Earlier, PNS NASR also handed over similar aid for the people of Djibouti and Sudan.

During the stay at Cotonou, the Mission Commander and Commanding Officer of PNS NASR called on Deputy Minister for Humanitarian Assistance and Disaster Management of Niger, General Secretary of Ministry of Foreign Affairs of Benin, and Chief of the Naval Staff of Benin Navy.

During the interactions, matters of mutual interest and enhancement of bilateral cooperation were discussed. Mission Commander conveyed sincere regards from Chief of the Naval Staff, Admiral Muhammad Amjad Khan Niazi, to the people of visiting countries.

The ongoing deployment of the Pakistan Navy Ship to the African region is to further strengthen the bonds of friendship with African countries.