Pakistani Rupee continued its upward movement against the US Dollar on the third day of the week. The Rupee gained 33 paisas against the USD today.

In March 2021, PKR has posted a gain of Rs. 5.35, or 3.4 percent, against the greenback. According to Tresmark, the fall in the value of the dollar will help to relieve debt pressure by approximately Rs. 550 billion.

According to the dealers, the Rupee is strengthening due to improved external position and lower demand for import payments.

With today’s issue of Eurobonds fetching Pakistan $2.5 billion, PKR is expected to gain further strength in the coming weeks.

Asad Rizvi, former treasury head of Chase Manhattan Bank, wrote on his Twitter profile, “Keep in mind that we are heading for a choppy day. The market may take some time to stabilize. But this is quite normal behavior. In such a situation, institutions and corporate players should avoid speculation & book their transactions according to their needs.”

SPB received IMF tranche & Govt raised $2.5 bil in 5,10& 30 years.The next POSITIVE for economy that I M forecasting for APRIL is remittances that will surge 2new levels, my FY21 outlook for REMITTANCES surpassing $27 billion is intact

However, the financial sector believes that the rupee is gaining due to higher inflows of dollars and reduced demand for the currency in both the interbank and open market.

The inflows as approved by the IMF, the World Bank, and the Asian Development Bank have created a positive sentiment for the local currency. This also hints at a further appreciation for PKR in the coming weeks.

A.A.H Soomro, Managing Director at Khadim Ali Shah Bukhari Securities, said, “Market supply is higher as travel and imports are still curtailed. Expect more money to clock-in because of the Ramzan factor, remittances, and Roshan Digital Account (RDA). The lesser the travel – the stringent the lockdown – the lower the consumption and higher the dollar supply. Thus, the currency is appreciating. Expect money from the IMF, World Bank, and Eurobonds to further support FX reserves.”

“The potential impacts of this appreciation will be positive for offsetting imported inflation, given rising oil prices in the global markets, and for lowering the debt repayment burden on the country’s foreign debts. However, it may render exports incompetitive in the short run,” he added.

Soomro said, “There is another peculiar angle to the PKR. Despite, the independence of the SBP, the government would want to muster all the anti-inflationary support it can as it moved to increase electricity prices by a massive 34 percent to meet reduce Circular Debt. Currency managers seem to be extending an olive branch. No sign of major depreciation for a few months, as REER is around approximately 95 rupees as well. Nonetheless, major swings should be avoided either side.” 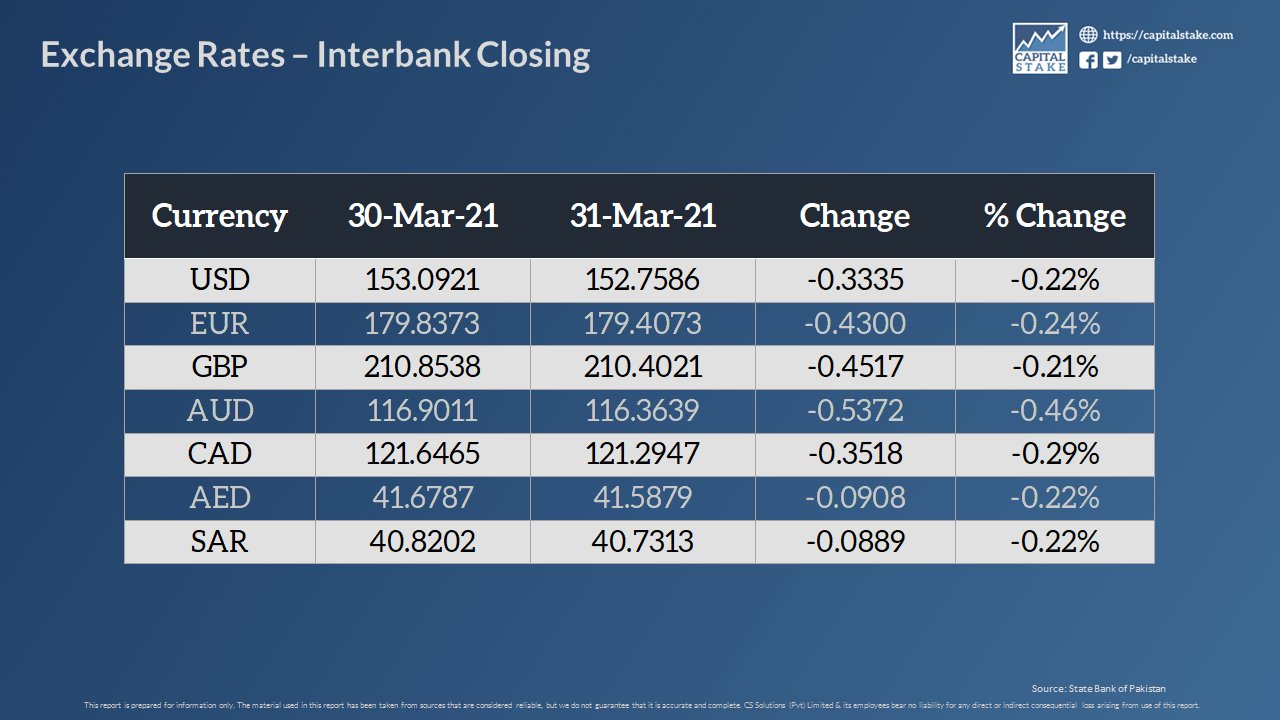