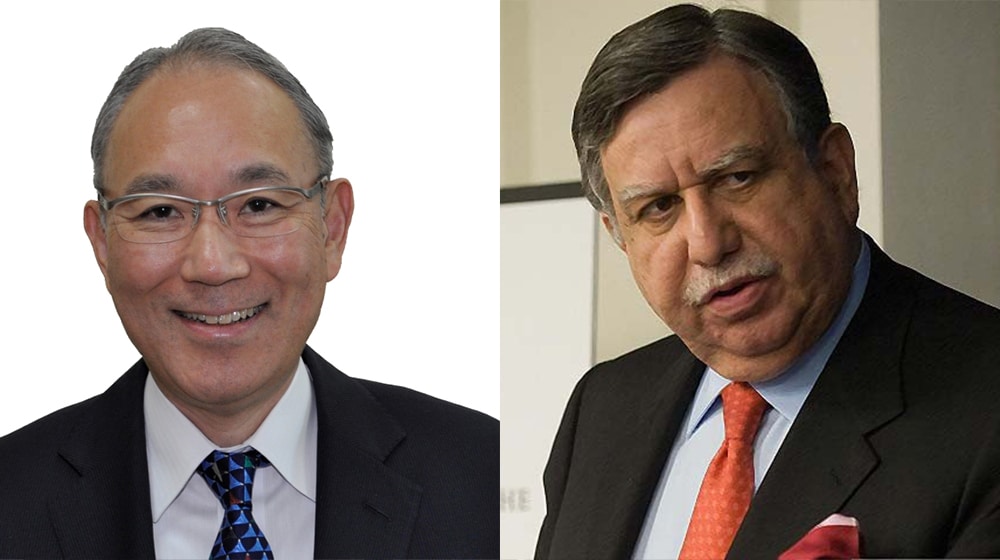 Kuninori Matsuda, the Ambassador of Japan, called on the Federal Minister for Finance and Revenue, Shaukat Tarin, here at the Finance Division.

SAPM on Finance and Revenue, Dr. Waqar Masood, was also present during the meeting.

While extending a warm welcome to the Ambassador of Japan, the Finance Minister stated that Pakistan and Japan enjoy friendly relations since 1952, which have been getting stronger with each passing day. The Finance Minister lauded the cooperation extended by the government of Japan to Pakistan in the fields of Education and Infrastructure development.

He said that Japan is one of the major development partners of Pakistan and he firmly believes that the cooperation will further strengthen in multiple fields for the mutual benefit of both countries.

Both reviewed the entire spectrum of business and investment relations and identified areas for further strengthening and expanding economic cooperation.

Pakistan And Uzbekistan To Explore Venues For Enhancing Bilateral Trade

The Ambassador informed the Finance Minister that Japan was now embarking on a project of Human Resource exchange with Pakistan, under which the Japanese labor market will be opened for highly skilled Pakistanis. He said this will provide job opportunities in Japan to Pakistanis, especially in the areas of Information Technology and Science and Technology. The Finance Minister highly appreciated and welcomed the Japanese initiative and suggested strong and close Japanese collaboration with the Ministry of Overseas Pakistanis, as well as Overseas Employment Corporation.

The Ambassador further apprised the Finance Minister that Japan was focusing on developing a strong export base in Pakistan. For this purpose, Japan was looking beyond the traditional sectors of textiles and automobiles.

Japan saw opportunities for investing in food processing, fishing, and agriculture. Finance Minister welcomed the Japanese initiatives and assured of the government’s fullest support for the purpose. He opined that goods manufactured in SEZs should be exported.

The Minister also touched upon the new Auto policy which has offered incentives to the new investors and will have a far-reaching impact on the development of the auto industry in Pakistan. The Finance Minister stated that with the introduction of the new Auto Policy, Japan has the opportunity to further its investments in the sector which in turn will be beneficial for both countries.

He said that he wants that Pakistan may be able to generate exportable surplus in spare parts, so new investment will prove to be lucrative for both countries. The Ambassador praised the new Auto policy and stated that the Japanese businesses were encouraged by the incentives provided under the policy.

Cuba Offers to Produce its COVID-19 Vaccine in Pakistan

The Finance Minister also thanked the Japanese government for debt relief under the second phase of G-20’s Debt Service Suspension Initiative (DSSI). He assured the Ambassador of his full support in improving the trade and economic relations between the countries.

The Ambassador thanked the Finance Minister for his support.