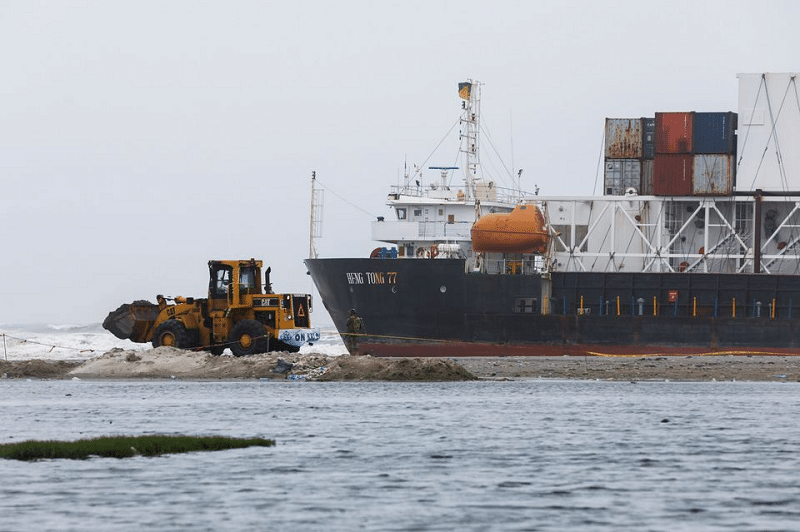 A meeting of the Senate Standing Committee on Maritime Affairs was held under the chairpersonship of Senator Rubina Khalid.

At the onset of the meeting, Senator Khalid and Senator Nuzhat Sadiq took up the matter of the cargo ship that had run aground on the beach in Karachi after it had lost its anchors due to rough weather. Senator Khalid asked the Secretary of the Ministry of Maritime Affairs about the actions that have been taken by the authorities in this regard.

The Secretary of the Ministry of Maritime apprised the committee that a cargo ship from Shanghai had been on its way to Istanbul, Turkey, and that it had not entered Karachi Port but had been in Pakistani waters for change of crew members. The rough sea had caused the vessel to lose its anchors and it had started drifting towards shallow waters. The ship was already in shallow waters by the time the KPT was informed about the situation.

He added that environmental experts had raised concerns that the oil being transported in the vessel could spill and potentially damage the environment.

The Secretary also explained that the ship was flying the flag of Panama. and that salvaging the vessel is the responsibility of the ship’s owners and the insurance company.

He stated that it had come to Pakistan’s shores on 17 July, and by the time the ministry had been informed of the drifting of the ship on its return to Pakistani waters after it had lost its second anchor, it was the first day of Eid and the ports were closed.

Senator Khalid asked the officials of the Ministry of Maritime Affairs if the closing of the ports on religious festivals is a worldwide practice, and the Secretary of the ministry failed to give a definite answer.

The committee members were displeased with the Secretary’s unsatisfactory answers to their inquiries about ports’ working days. They also showed immense resentment for his disorderly conduct and walked out in protest against his attitude.

The meeting was attended by Senator Nuzhat Saqid, Fida Muhammad, Muhammad Abdul Qadir, Kauda Babar, Danesh Kumar, Dost Muhammad Khan, and Muhammad Akram. The officials of the Ministry of Maritime Affairs, and Law and Justice Division were also in attendance.