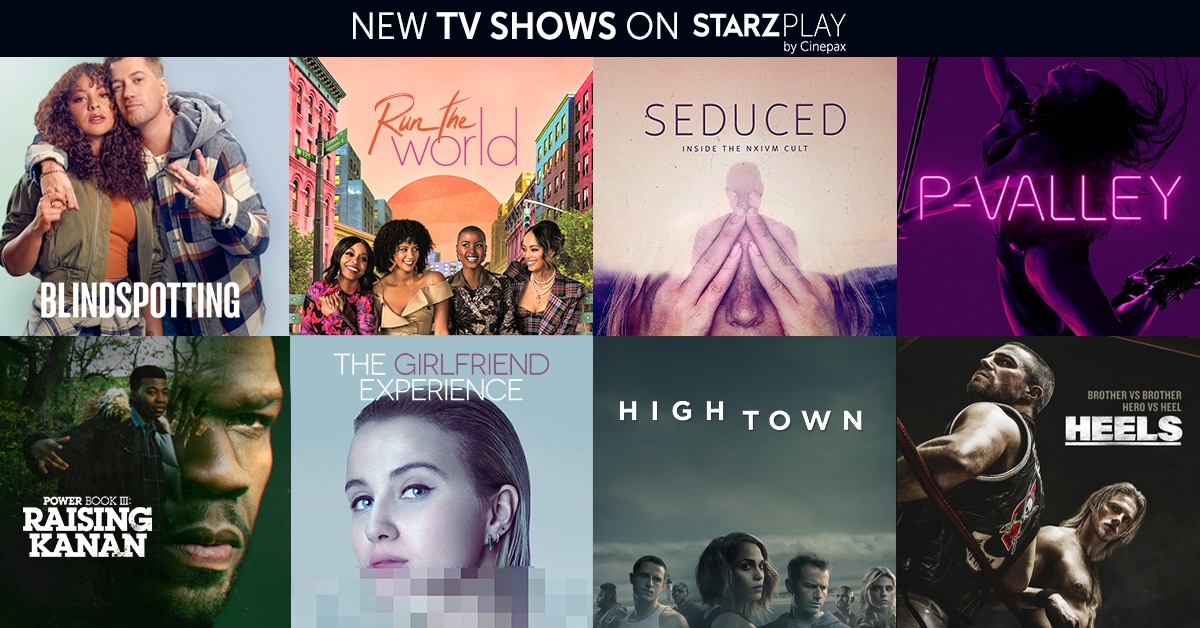 This August is going to be all about STARZPLAY originals, with 8 new and exclusive series premiering on the STARZPLAY by Cinepax app this weekend.

Heels: Two brothers and rivals – one a villain, or “heel,” in the ring; the other a hero, or “face,” war over their late father’s wrestling promotion, vying for national attention in small-town Georgia. Watch Stephen Amell and Alexander Ludwig in this latest STARZPLAY originals series.

Run the World: The story focuses on a group of black women who work, live, and play in Harlem, New York, as they strive for world domination. They’re not only surviving but thriving together.

The Girlfriend Experience: Iris, a neuroscience major, drops out of school and moves to London to join a tech start-up that is studying human behavior. As she begins to explore the transactional world of the girlfriend experience, she quickly learns that her client sessions provide her with a compelling edge in the tech world and vice versa.

High Town: Set in the world of beautiful but bleak Cape Cod, one woman’s journey to sobriety is overshadowed by a murder investigation dragging her into its fold. Watch this gritty crime series only on the STARZPLAY by Cinepax app and website.

Seduced: Inside The NXIVM Cult: India Oxenberg, the 28-year-old daughter of actress Catherine Oxenberg, speaks out for the first time about her involvement in NXIVM and how she became a “branded sex slave”. This 4-part true-crime docuseries is a must-watch for crime TV enthusiasts.

Blindspotting: As Ashley’s partner of 12 years and father of their son, Miles is suddenly incarcerated, leaving her to navigate a chaotic and humorous existential crisis when she’s forced to move in with Miles’ mother and half-sister. The series follows up to the critically acclaimed movie of the same name.

P Valley: Down deep in the Mississippi Delta lies an oasis of grit and glitter in a rough patch of human existence where beauty can be hard to find. P-Valley is a critically acclaimed show that highlights issues face by the people living in the dirty south of the USA.

Power – Raising Kanan: “Raising Kanan” is a prequel to the original “Power” franchise and focuses on the childhood of the menacing villain played by Curtis “50 Cent” Jackson in the first series. Here we catch up with Kanan growing up in Queens, New York City. Kanan is a 15-year old child of Raquel “Raq” Thomas, a cocaine distributor with an emerging network of dealers across the city; exploring themes of identity, violence, and legacy.

STARZPLAY has been working on the promotion of local talent recently, releasing Khushkhabri Kay Baad, directed by Angeline Malik; Khel Tamasha, directed by Jawad Bashir; and Karachi Division, the most successful original web series, directed by none other than Shamoon Abbasi.

Along with local content, STARZ originals, STARZPLAY by Cinepax is offering a diverse range of blockbuster movies and TV shows such as FRIENDS, The Vampire diaries, The Flash, Vikings, Harry Potter, The Hobbit and much more. (www.starzplay.pk)

Arif BaigMohamed, Chairman Cinepax Group, commented, “This year, STARZPLAY by Cinepax has successfully joined hands with successful Pakistani directors as well as collaborated with international distributors to bring you some of the best content available globally. STARZPLAY’s focus has been in acquisition of original content as well as keeping in mind the importance of new and diverse content to the streaming platform.”