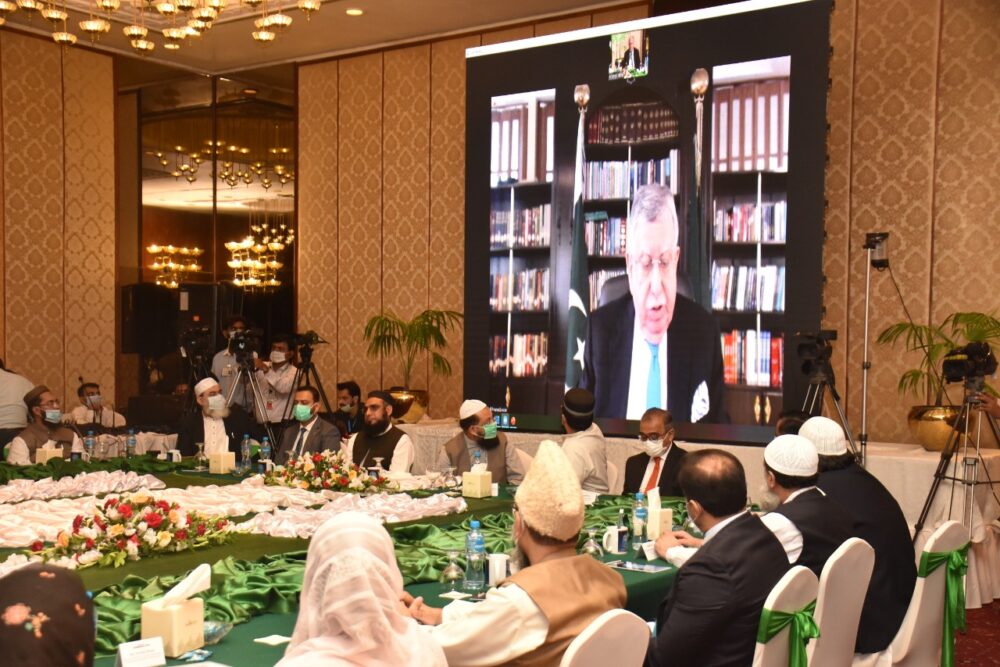 Federal Minister for Finance and Revenue, Mr. Shaukat Tarin, delivered a keynote address (through a video link) during the Round Table Conference (RTC) organized by the Daily Pakistan Observer on the topic “Islamic Banking – The Way Forward” in Karachi.

In his remarks, the Finance Minister felicitated the Pakistan Observer, a well-established and prominent English newspaper, for organizing the Fourth Round Table Conference (RTC) on Islamic Banking. He commended the organizers for bringing a wide array of stakeholders of the Islamic banking industry together at the RTC.

The Islamic Banking Industry has experienced healthy progress over the years and the time has come to contemplate upon the ways and means on how to traverse the future path of taking this industry to its next phase of development. Islamic Banking has grown rapidly, both in local and international markets, and has assumed systematic significance in several jurisdictions. Apart from its faith-based appeal, the increasing interest in the Islamic finance industry stems from its strong economic and social considerations. Its skewness towards asset-backed and equity-based transactions helps promote entrepreneur friendliness and consideration of project viability, he added.

The Finance Minister further stated that Islamic finance offers prudent financing options that ensure that the transaction is less prone to a debt crisis and the funds are employed for their prescribed purpose minimizing defaults. Therefore, Islamic finance promotes financial inclusion by bringing that particular segment into the financial ambit, which has consciously excluded themselves due to their faith-related sensitivities.

Towards the end, the Finance Minister expressed satisfaction over the progress made by Islamic Banking since its inception. The Government of Pakistan has played a pivotal role in the promotion and development of the Islamic Banking Industry. The provision of a level-playing field to the Islamic Banking and finance industry vis-a-vis the conventional financial system has been one of the priority areas of the present Government.

The emergence of Sukuk has been a significant development in Islamic Capital Markets due to its ability to raise financing under shariah-permissible modes while maintaining a strong linkage between the real economy and the financial sector. In the case of Pakistan, the Sukuk market has witnessed significant progress as both sovereign and corporate entities have been issuing these instruments.

The Finance Minister also underlined the efforts of the Government and the State Bank of Pakistan for facilitating the Islamic Banking Industry through the provision of tax neutrality vis-a-vis the conventional banking system. Recognition of SBP’s efforts at the global level by being awarded as the “Best Central Bank to promote Islamic Banking” is another feather in its cap, which reflects its better performance in comparison with other regulators around the world in promoting Islamic banking in the country.

He also emphasized upon all stakeholders to explore the potential of Islamic finance in promoting infrastructure development in countries like Pakistan, particularly in Public-Private Partnership (PPP) delivery framework, he concluded.