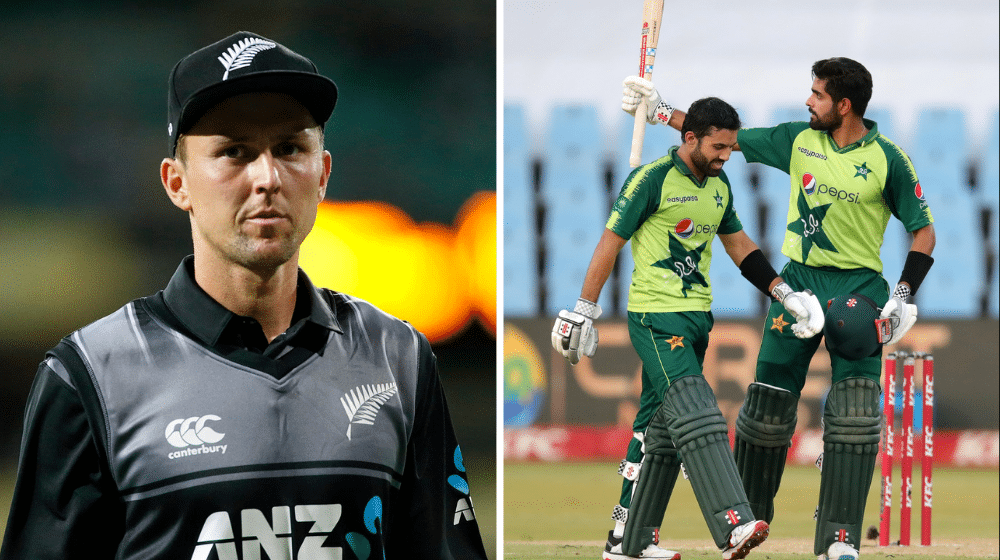 New Zealand’s left-arm pacer, Trent Boult, has named the Pakistan duo of Mohammad Rizwan and Babar Azam as the toughest batsmen to bowl to in the upcoming T20 World Cup.

Boult said that Rizwan is a phenomenal player, and Babar is a very classy player who has been performing in all formats of the game. Boult also named the Ireland opening batsman, Paul Stirling, as a dangerous T20 batsman in the upcoming mega event.

Boult named the two batsmen during an interview on the show, ‘ICC Men’s T20 World Cup Trophy Tour.’ The video of the interview was released by the official account of the International Cricket Council (ICC) on various social media platforms.

"@iMRizwanPak is a phenomenal player"@BLACKCAPS's Trent Boult picks the toughest batter to bowl to in this World Cup.@DanishSait will host Boult & Beth Mooney in the latest episode of Around The Wicket!

Earlier, Pakistan’s all-format captain, Babar Azam, had named Trent Boult, along with Mitch Starc, Josh Hazlewood, and Pat Cummins, as the toughest bowlers he has faced in international cricket. Babar’s record against New Zealand in T20Is has been impressive so far. He has scored 235 runs at an average of 47.00 and a strike rate of 120.51 in 6 matches he has played against them.

Similarly, Rizwan’s performances against the Kiwis have also been formidable. He has scored 132 runs at an average of 33.00 and a strike rate of 132.00 in 4 T20Is he has played against them.

Pakistan and New Zealand have been placed in the same group in the T20 World Cup, and there is a chance that Ireland can also make it into the same group in the Super 12s stage of the tournament. Boult will have to bowl to both Rizwan and Babar in the highly anticipated encounter between Pakistan and New Zealand, scheduled to be played on 26 October at Sharjah Cricket Stadium.

While New Zealand is also scheduled to tour Pakistan for a limited-overs series later this month, Boult has not been picked in the squad.