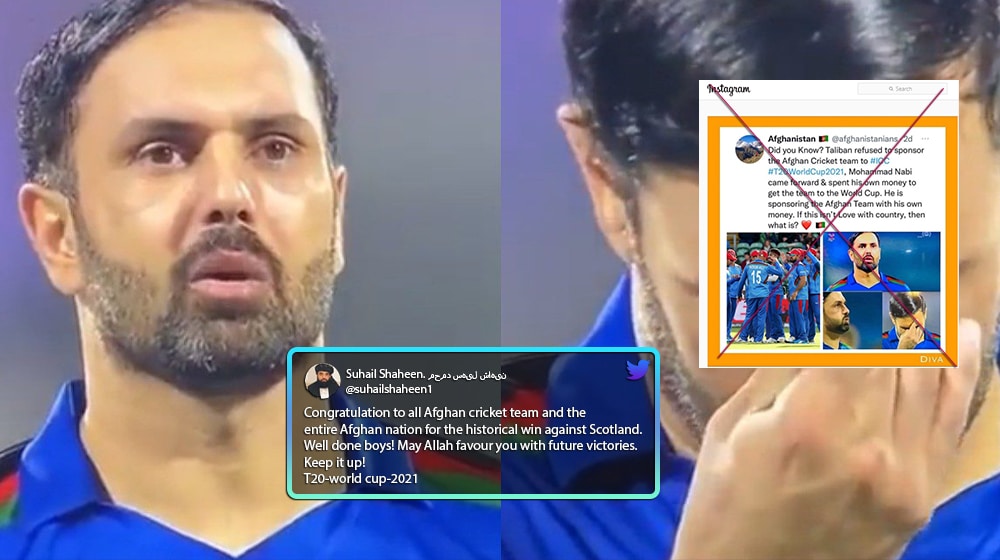 Various news reports have surfaced online that Afghanistan’s Captain, Mohammad Nabi, spent his own money to cover his team’s expenses at the 2021 T20 World Cup.

People around the world poured their hearts into blogs and posts, commending the Afghan skipper for such a remarkable feat. But, did he really do it? Congratulatory tweets from representatives of the Taliban regime suggest nothing of the sort.

Following that, Taliban officials took to social media to congratulate the Afghan national cricket team on their victory. Taliban spokesperson Suhail Shaheen tweeted, “Congratulation to all Afghan cricket team and the entire Afghan nation for the historical win against Scotland. Well done boys! May Allah favor you with future victories. Keep it up!”

Congratulation to all Afghan cricket team and the entire Afghan nation for the historical win against Scotland. Well done boys! May Allah favour you with future victories.
Keep it up!
T20-world cup-2021

While the Taliban are opposed to many types of public entertainment, cricket has always been an exception since their fighters love watching the national team play even during times of war. Anything besides that is nothing more than “fake propaganda” against the new regime.

Prior to this year’s apex T20 World Cup, the CEO of the Afghanistan Cricket Board, Hamid Shinwari, discussed the future of cricket in the region with an international daily.

He explained that “the Taliban will be supportive of cricket development in the country, and star players will not have any trouble representing the senior national team”.

Afghanistan’s T20 success depends on their strong batting and the bowling attack of Rashid Khan, Mohammad Nabi, and Mujeeb Ur Rahman. Overall, more than half of their World Cup squad has played professional T20 cricket in other countries, and it would be foolish to even imagine that the Taliban would abandon players of their capabilities.