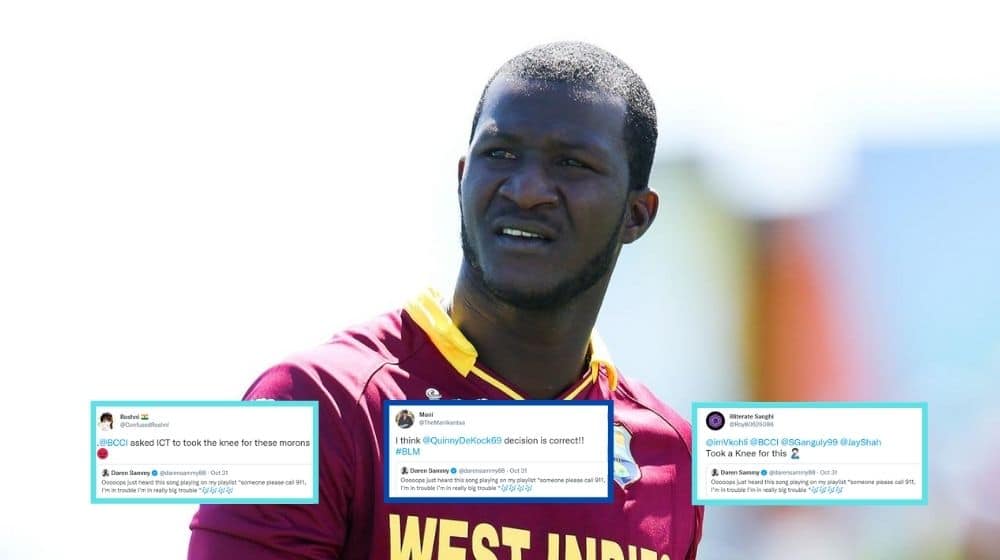 Former West Indian captain Darren Sammy had to face the rage of the Indian fans as he poked fun at India on his Twitter account. Sammy jokingly tweeted, “Ooooops just heard this song playing on my playlist ‘someone please call 911, I’m in trouble I’m in really big trouble.” The tweet was meant to reflect the position of India in the ongoing T20 World Cup.

Indian fans did not take the tweet lightly and launched a racist tirade at the former World Cup winner. Sammy was subjected to disgusting remarks, and some Indian fans went as low as referring to the George Floyd incident. Over the past week, Indian fans have targeted Mohammad Shami for his religious views and the Indian captain, Virat Kohli, for defending Mohammad Shami.

Here are some of the vile reactions of Indian fans:

Frustration of not being picked in IPL is clearly showing https://t.co/PEDd61aGaY

Sorry but we Indians can't roast you coz you're already fully roasted. 😭😭😭 https://t.co/YSCFmlXFv6

India’s hopes for qualifying for the semi-finals hang by a thread as they suffered their second consecutive loss in the mega event. Previously, they lost to Pakistan by a huge margin of 10-wickets.

*George Floyd tweets not included due to distressing images.