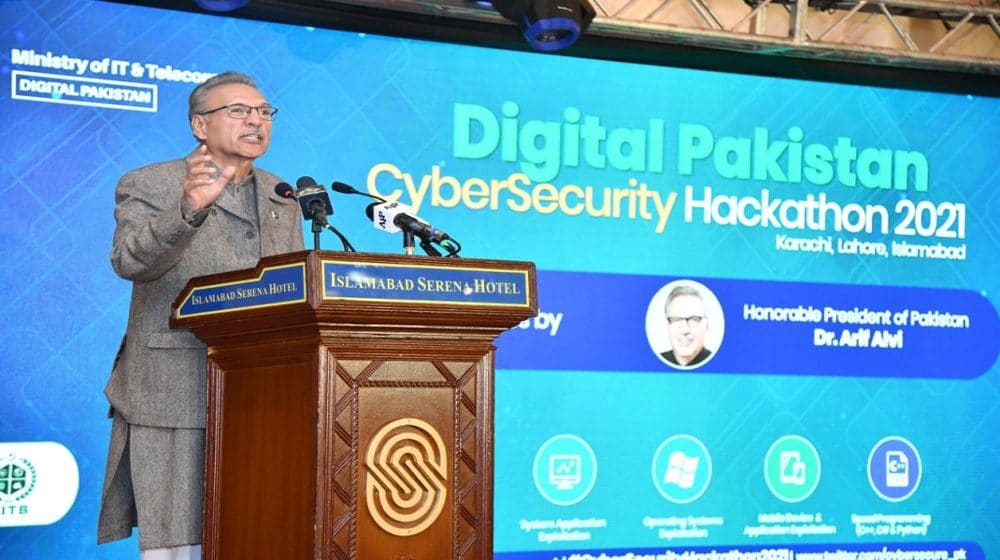 Addressing the awards ceremony of the first nationwide Cyber Security Hackathon 2021, the president said cyber data had become the most valuable commodity world over and stressed that Pakistan direly needed to produce millions of graduates in the field of cybersecurity.

Themed ‘Hackers Ignited – Journey of young cybersecurity warriors’, the Hackathon was organized by Digital Pakistan under the Ministry of Information Technology & Telecom, and Ignite.

President Alvi said throughout the world including Pakistan, the infrastructure of vital importance such as banking system, credit card data, telecommunication, electricity installations, dams and hospitals were digitalized and pointed out that anything linked with the internet or cloud was “susceptible to cyber or ransomware attacks”.

He said the recent cyberattacks on the system of the Federal Board of Revenue and National Bank of Pakistan drew the attention towards an effective guard to defeat the cyberthreats.

He said with changing concepts of security, the country’s defence was linked with enhanced awareness and capabilities to develop and deploy a proper mechanism.

To match the rapid technological development, he said, there was no option but to opt for digitalization, however emphasized ensuring in-built cybersecurity set up to save the ‘treasure of data’.

He said a paradigm shift in policymaking was needed to abreast the country with an ‘offensive and defensive cybersecurity. Instead of traditional brick-and-mortar educational facilities, the short-term online and virtual courses could also prepare the human resource for the market, he added.

He said he had been constantly encouraging the vice chancellors of universities to work towards producing a large number of graduates in the field of cybersecurity.

He mentioned that the government was offering 50,000 scholarships for students in different academic disciplines with a fifty percent disbursement allocated for girls.

President Alvi gave away awards and cash prizes worth Rs 6 million to the winners of the Hackathon competitions.

Secretary Ministry of IT & Telecom Sohail Rajput said cybersecurity had become a critical domain globally, particularly in the scenario of frequent cyberattacks at national institutions.

He said the IT Ministry was working on an ecosystem fulfilling the needs of a safe cyberspace in the country. The Hackathon 2021, he said, greatly helped in identification of talented youth capable of exploring the cyberworld.