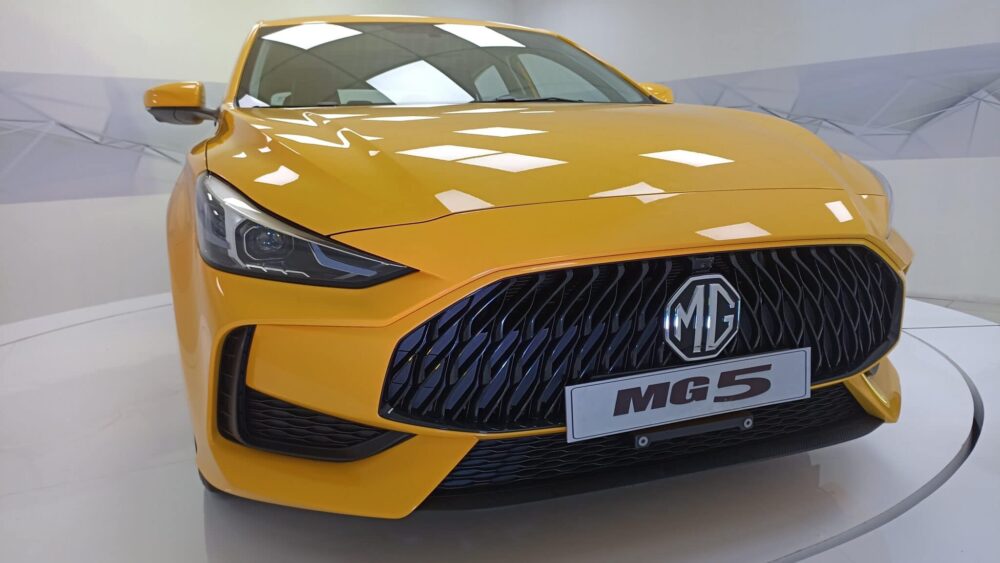 MG Motors Pakistan has displayed its much-awaited MG 5 (MG GT for Pakistan) at the Packages Mall in Lahore.

MG Motors Pakistan has displayed its much-awaited MG 5 (MG GT for Pakistan) at the Packages Mall in Lahore, and its release is currently a hot topic in the local market.

The car is on exhibit at the MG lounge inside the mall. However, the MG team only allowed a select few people to have a close look at the vehicle at certain periods. 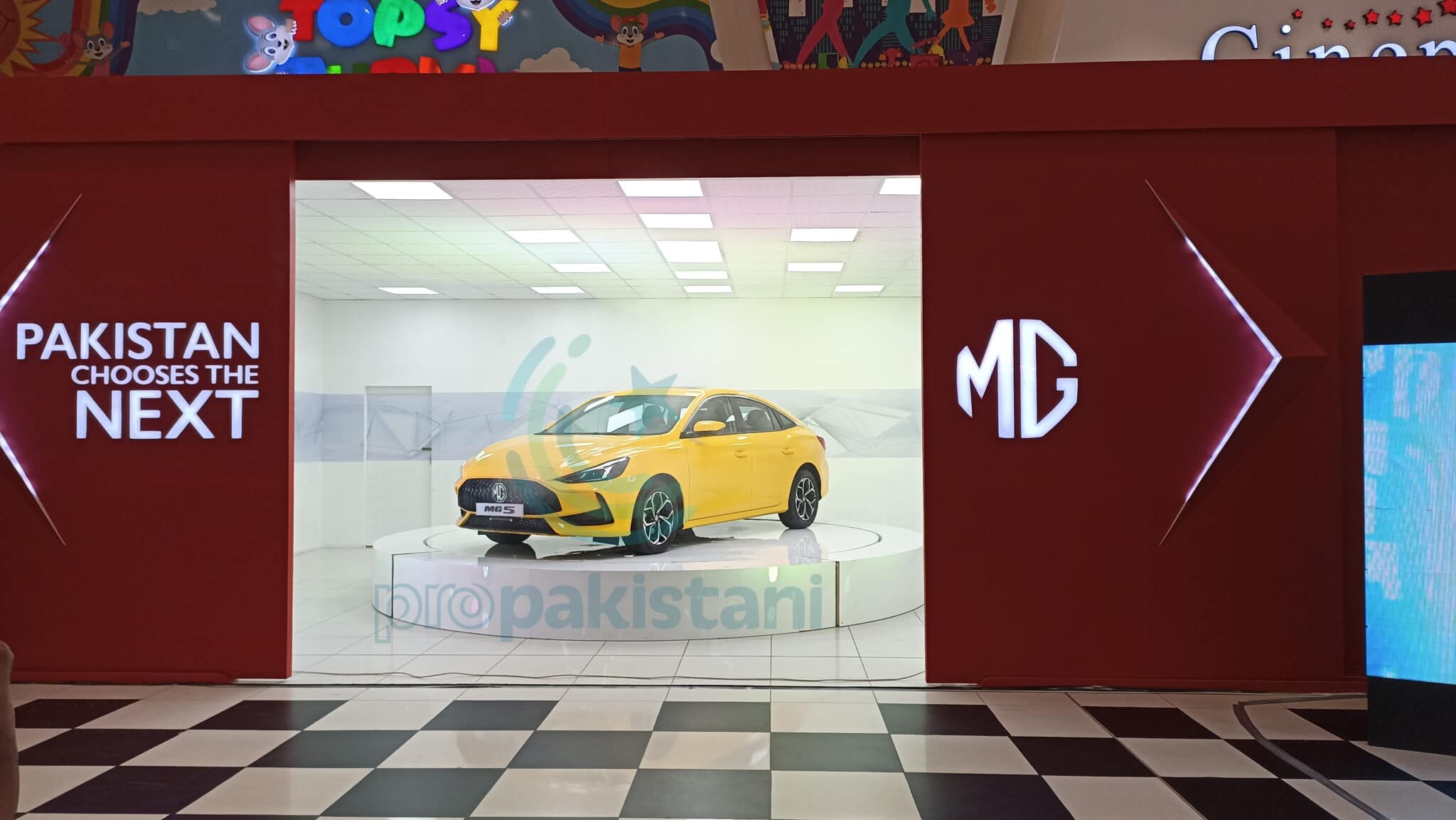 The MG 5 was also not parked with the other MG vehicles at the mall as the MG HS 2.0T AWD and the MG HS PHEV had been parked in front of their displays. The MG team had, in fact, kept the MG 5 concealed within the MG lounge, with sliding doors that only opened at specific times to reveal it periodically for short durations. 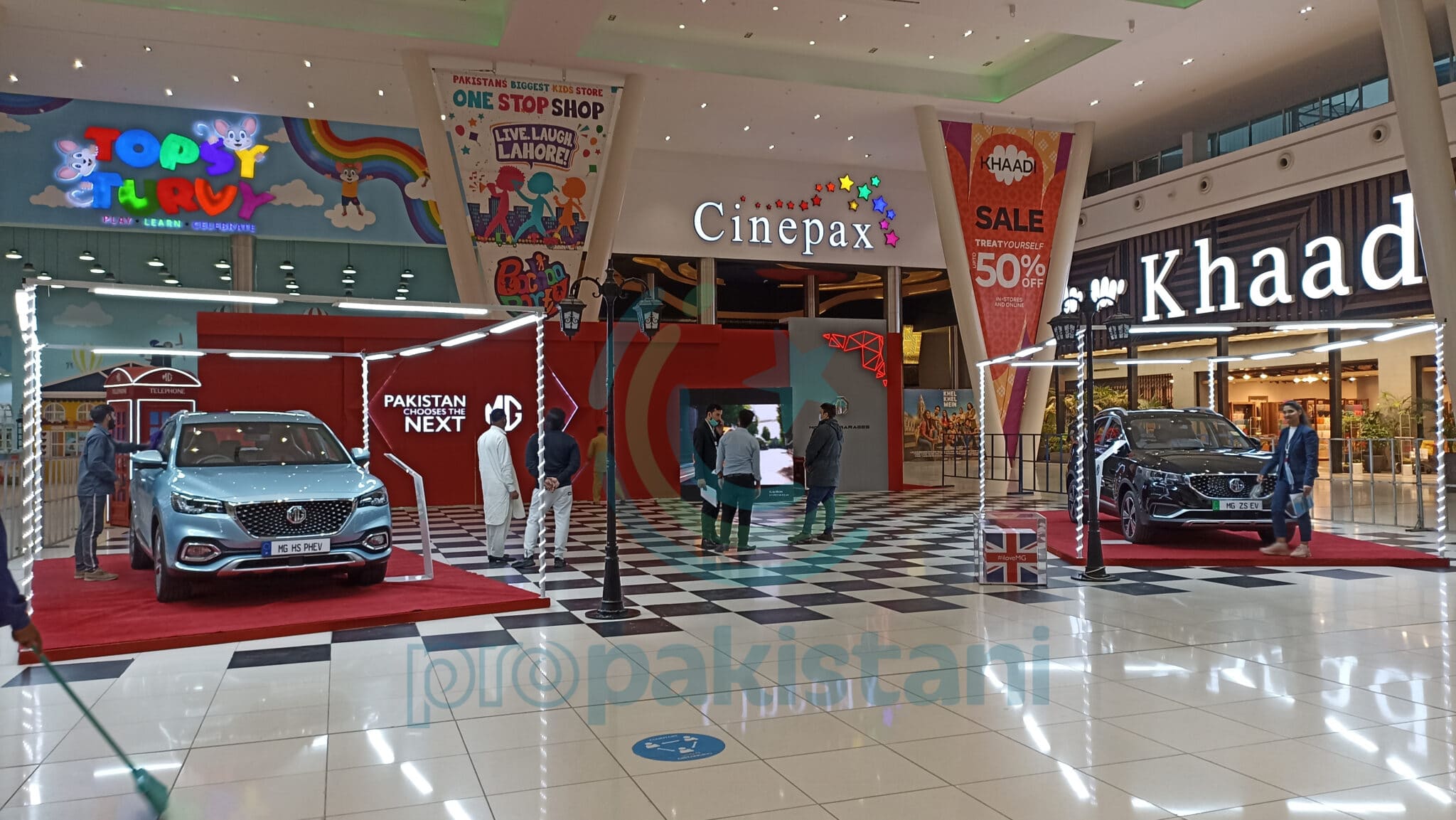 People at the mall stood at a distance and waited for the doors to slide open to allow them to witness MG’s new offering.

MG had previously displayed the sedan at certain events and had even allowed random visitors to have a look at it. It is being speculated that letting only a few people have a closer look at the one in Packages Mall could be a marketing tactic to build up more hype among the locals.

Alongside MG Pakistan’s team and representatives at the event was a research team from Nielson IQ, a company that conducts market research and analyses of customer interactions.

MG Motors Pakistan is eager to get the public’s feedback about the MG 5 and gave visitors a form to let them detail if they like the car, and what features they think that the Pakistani MG 5 should have. This indicates that MG is still working on coming up with a variant that is truly meant for Pakistanis.

Faeza Altaf Sheikh, a senior research analyst at Nielsen IQ, disclosed that the automaker is yet to make a final decision about the official launch of the MG 5 in Pakistan or the specifications that will be included or excluded in the MG 5 that will be built for the Pakistani market.

She told ProPakistani that the research might go on for a couple more months as the company intends to showcase the MG 5 at several places and events in the upcoming days.

The yellow MG 5 at Packages Mall is an imported left-hand drive, 1.5 liter, naturally aspirated, non-turbo variant with the 180DVVT badging on its rear. The displayed version is the exact car that is expected to arrive in Pakistan despite being left-handed and with a few different features.

The front is like a clone of the Maserati Quattroporte, and has daytime running LEDs with projection lamps that light up automatically when they detect darkness. It also has a sporty grill with a huge MG emblem in the center. 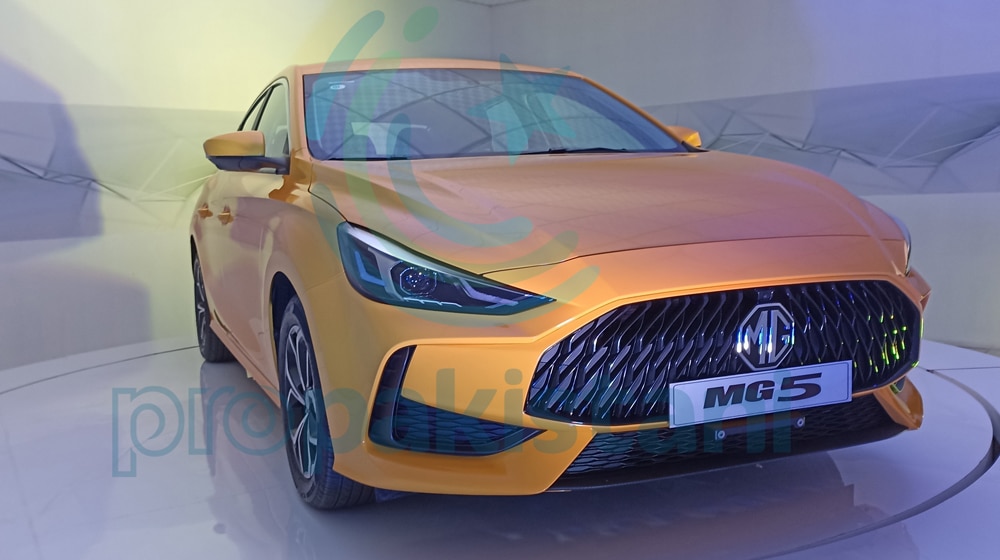 The rear seems to be inspired by the Mercedes C-Class on account of the design of the rear lights that are beautiful lava lights. The placement of the side reflectors on the edges of the bumper, and the chrome dual exhaust cut-outs fit beautifully into the matte trim in the center, adding to its neat and sharp looks, besides the parking sensors in the rear bumper. 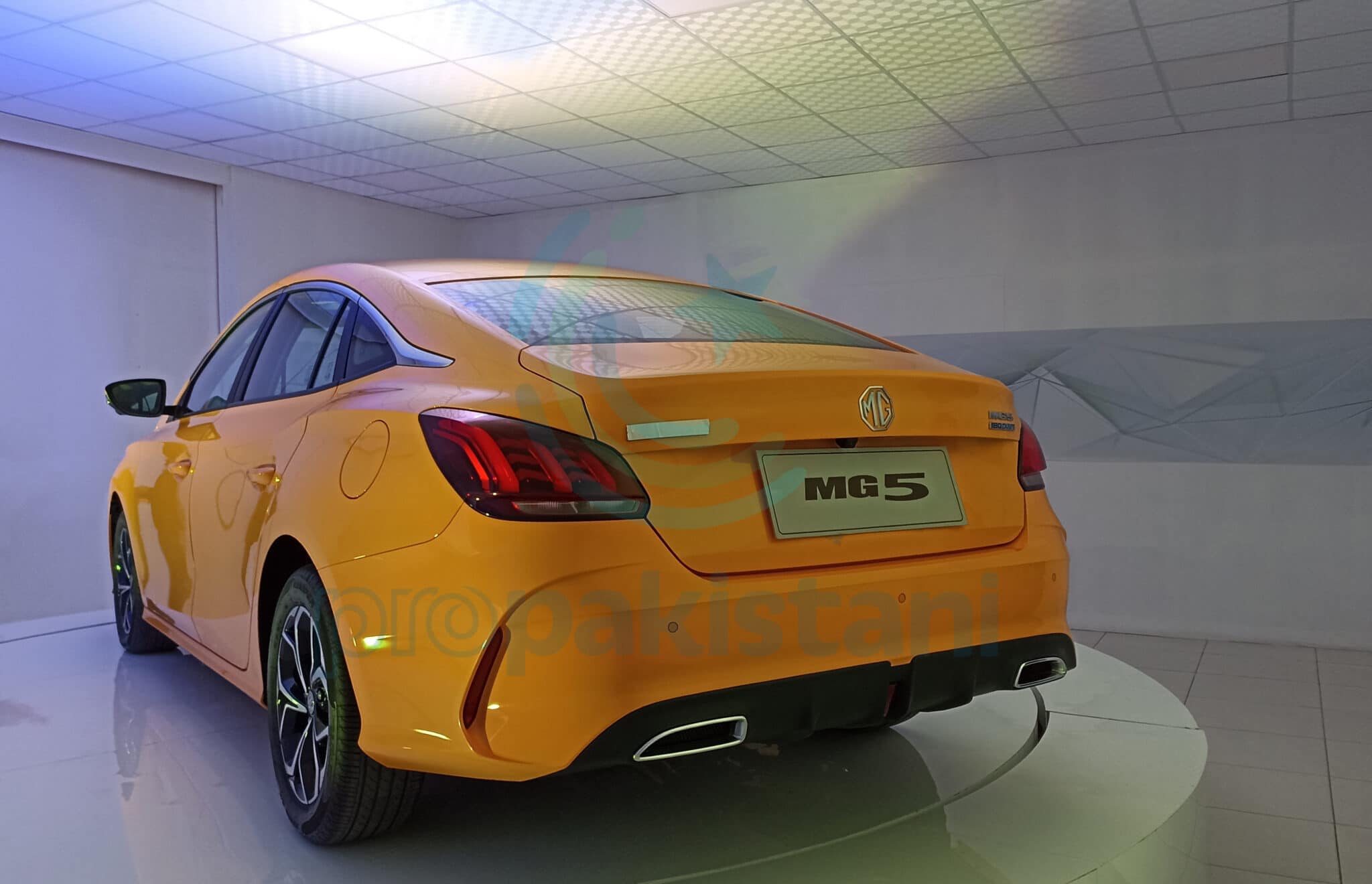 The side profile of the MG5 extends the graceful flow, but resembles that of the Honda Civic X. The sides do not boast of much styling or chrome trims; they seem simpler than the front and rear but still manage to look nice. The side mirrors of the car also look stylish, and house 360° view cameras.

The MG 5 is equipped with two-toned 16-inch alloy wheels that have a 205/55/R16 tire size. For now, the company has not clarified the exact alloys on the displayed car for its upcoming Pakistani version. 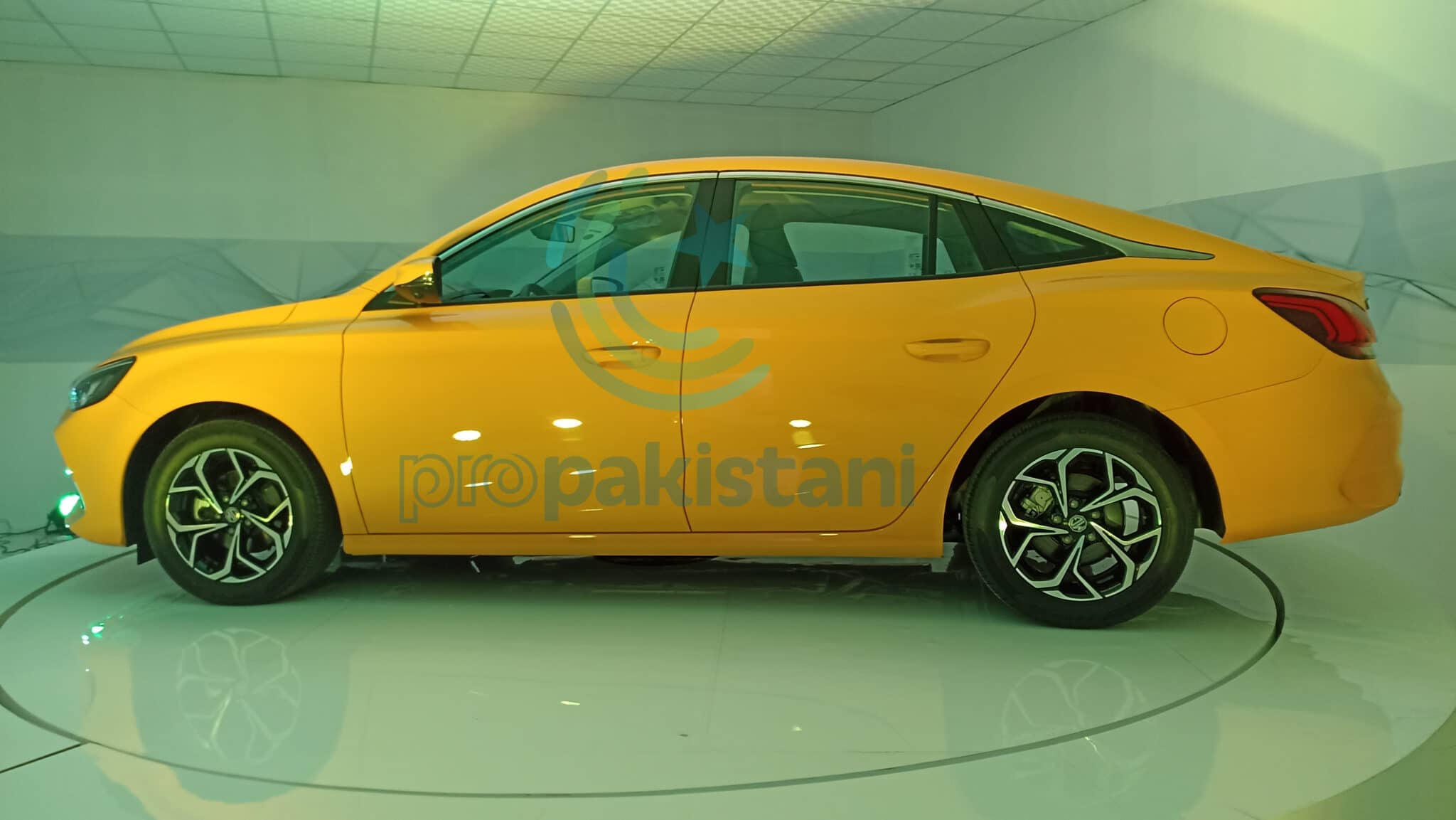 The top of the MG 5 has a sunroof that is not fully panoramic but has a great view. (Given Pakistan’s climate conditions, a panoramic sunroof is not exactly a must-have feature). 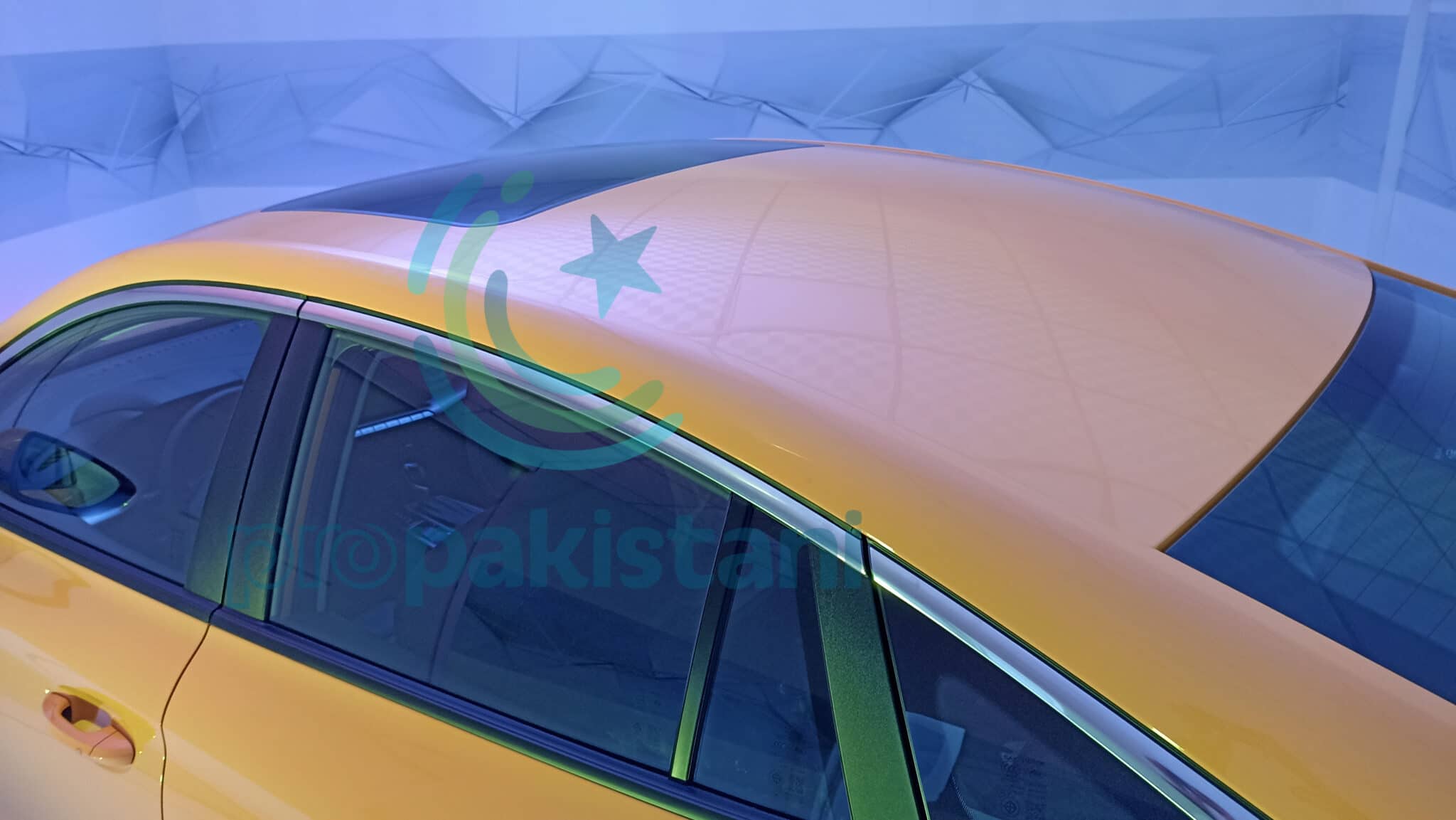 The car is undoubtedly beautiful inside and out. It has a graceful and matchless interior that no other vehicle in the same segment can beat. The hexagon patterns (a.k.a 3D diamond design) run along the center of the dashboard and add to its impressive look. Note that these hexagons are a popular feature of the Lamborghini as well. 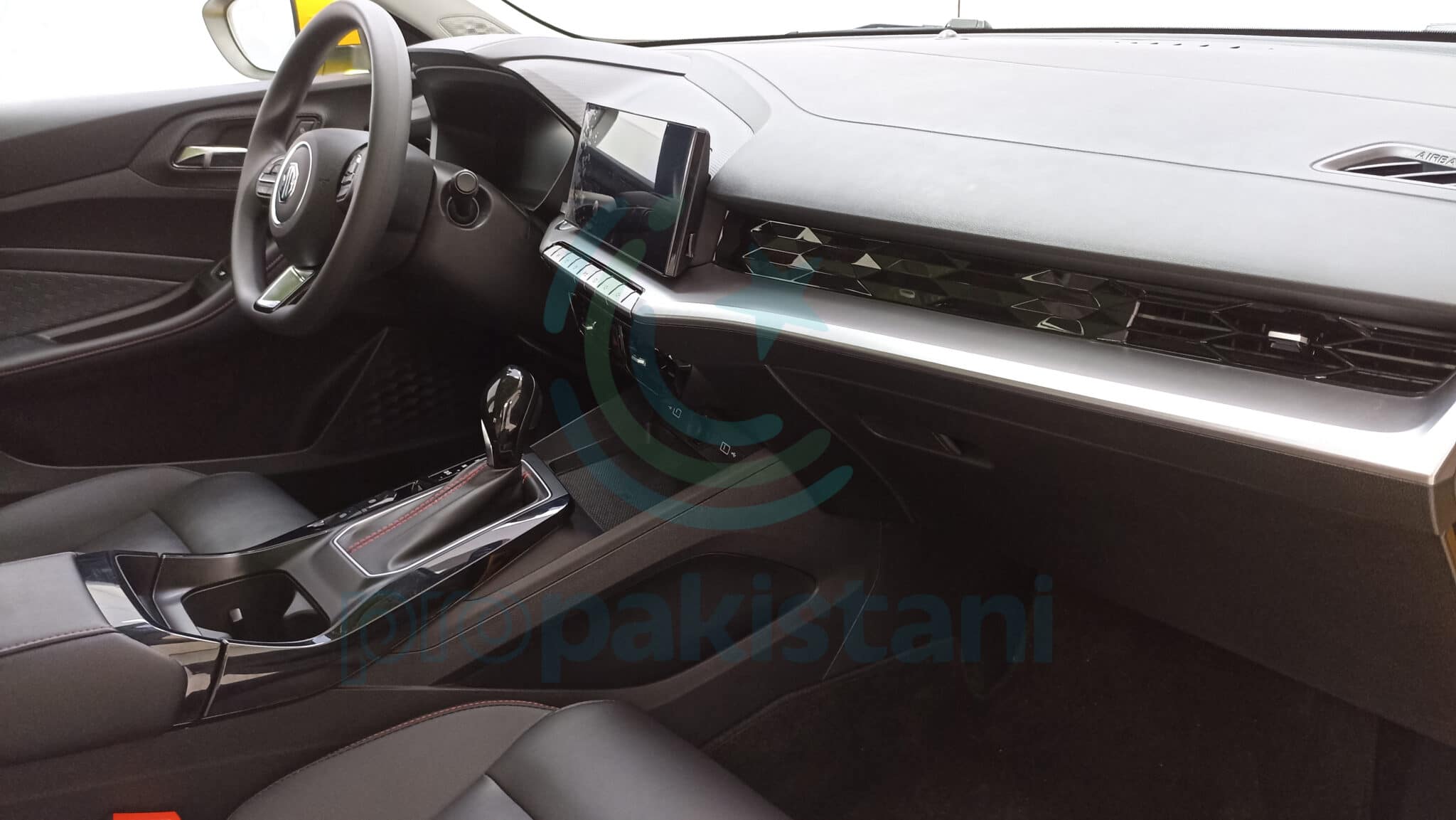 The instrument cluster is fully digital and provides all sorts of essential car-related information, including a tire pressure monitoring system.

The steering is identical to the previous MG family cars such as the MG HS and the MG ZS, with the same key functions. The displayed car lacks paddle shifters, but upon being asked, a representative of MG said that they will be offered in the top trim that will be launched in Pakistan. 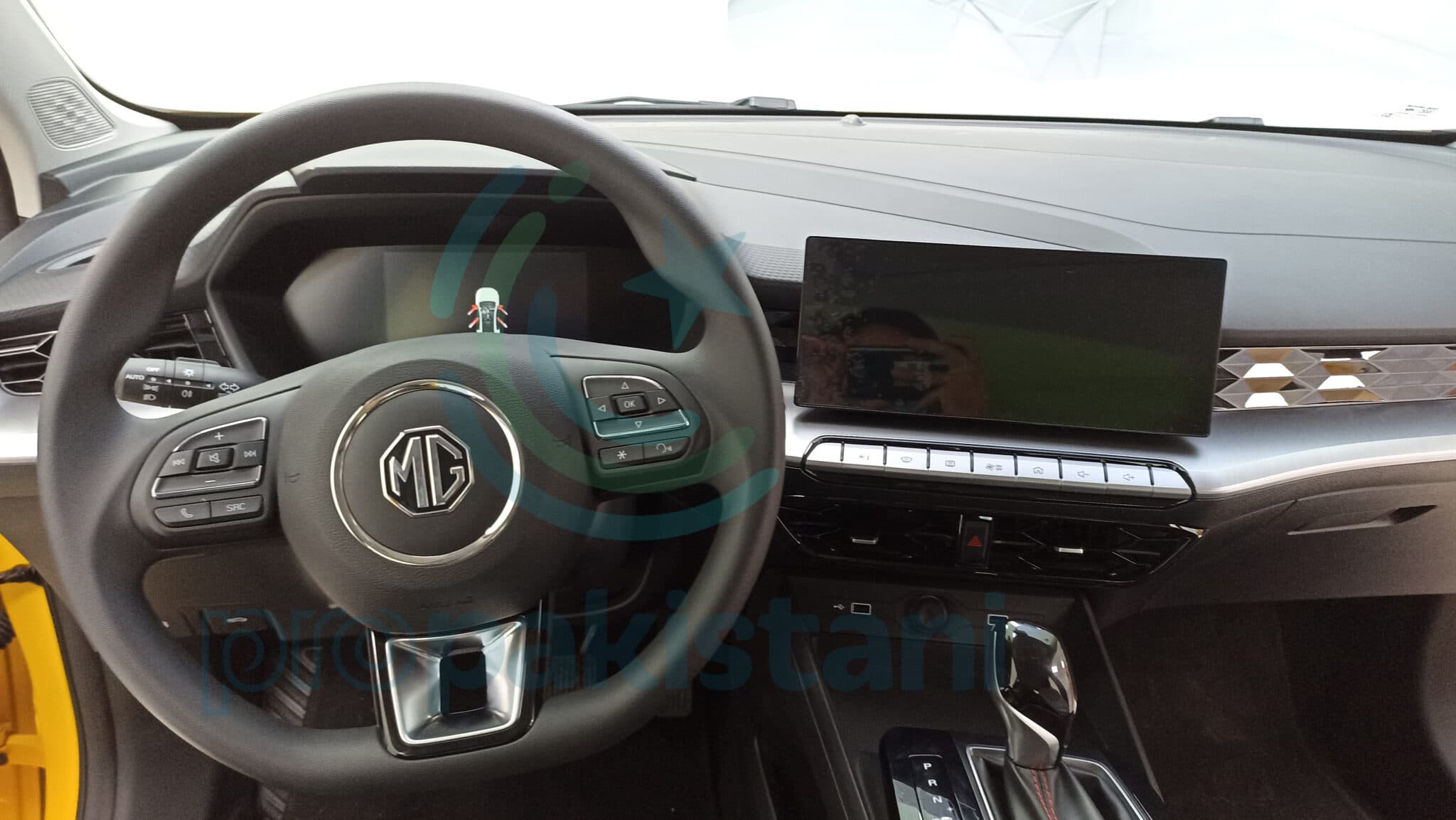 All the elements of the interior are driver-oriented and provide easy access to everything. For example, the wide 10-inch display screen in the center supports Apple Car Play and Android Auto, and lets the driver use applications hands-free on a smartphone it after it is connected.

The MG 5 is also fully equipped with four cameras at the front, rear, and on its side mirrors that give the driver a 360° view of the surroundings. This is especially beneficial for driving in congested areas or places with tight parking spots.

Vents and climate control buttons run down the display screen along with two USB ports and a lighter. There is no cool box in the center console, but MG claims that it will be offered in the top variant. In addition to this, the MG 5 has a single AC vent for the passengers in the back, and a USB port.

The seats seem to be comfortable for long drives and lend a sporty essence to the interior with black leather and red stitching all over. While the seats of the car on display have manually adjustable seats, the higher trim is expected to have electric seats.

The overall design and features of the MG 5 exude that it is going to be a big competitor for the existing C-segment sedan section vehicles in the Pakistani market, including the Honda Civic, the Toyota Corolla, and the Hyundai Elantra, as its expected price seems to lie between Rs. 3.8 million and Rs. 4.3 million.

MG Motors Pakistan claims that it will launch the MG 5 within a few months but it is still obviously involved in gathering feedback from locals about what they desire and what features should be included in the car. This exercise clearly shows that MG wants to put its best foot forward in the growing Pakistani car market.