The month of November has seen some interesting developments resulting in both, intrigue and worry for car lovers.

With the new year drawing closer, the car industry is becoming even more active every minute. November had brought some interesting developments that resulted in intrigue and worry for car lovers, industry experts, and the general public.

The majority of news stories last month regarding the current state and the future of the Pakistani car market piqued their interest, and this news roundup will cover all its important events, in addition to discussing how they are likely to affect the market in the coming days.

A Wave of Price Hikes 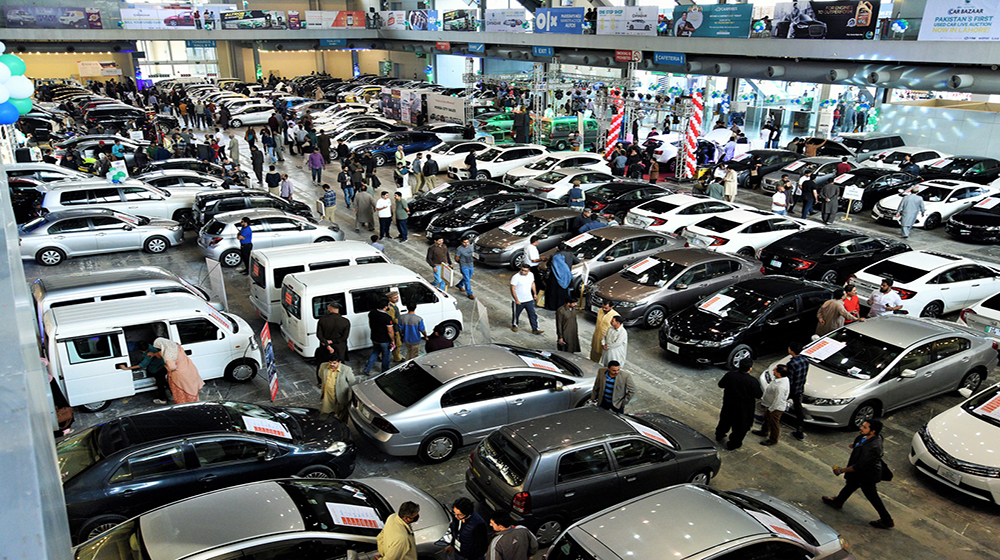 The recent increase in the value of the US Dollar shook the Pakistani car industry up a good deal. After numerous speculations and warnings by automotive analysts, car companies finally pulled the trigger on the price hikes in November. While Kia, Toyota, Suzuki, and Honda were the first companies to do so, it took some time for the remaining automakers to come around. Hyundai Nishat and Regal Motors (Prince-DFSK) increased their prices soon afterward, while Changan and Proton did so last week.

The recent price hikes have been quite steep and led to growing concerns among customers about the affordability of new vehicles. 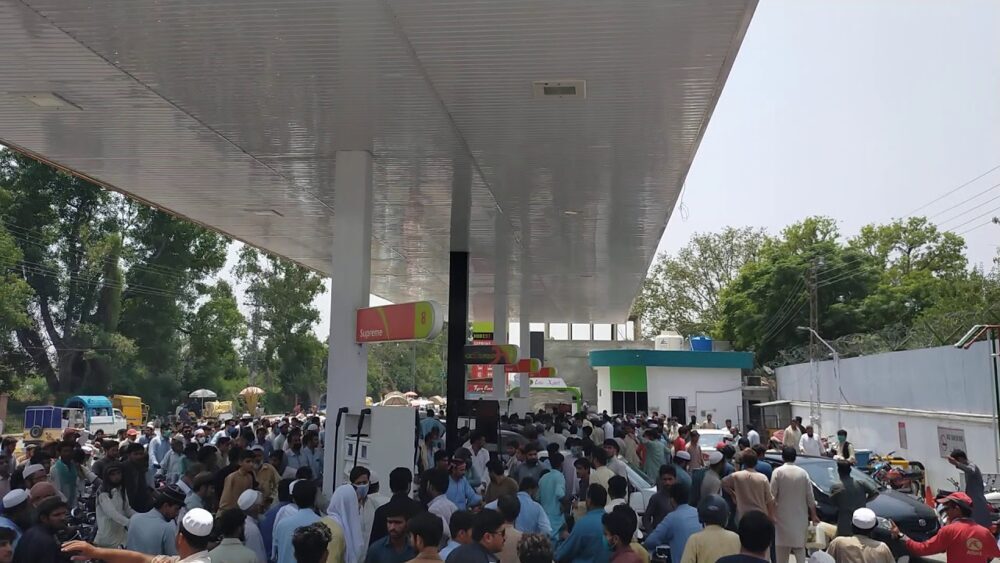 If the fuel price hikes alone were not troublesome enough when they surged to an all-time-high Rs. 146 per liter, petroleum dealerships saw it fit to call for a nationwide strike, adding to the inconvenience of the public amid the ongoing crisis,

The news lead to chaos among the masses as they rushed to open petrol stations in droves. Media outlets reported scuffles, lengthy queues, and general social unrest all over the country as people tried to fill up their fuel tanks and stave off the predicament.

The Pakistan Petroleum Dealers Association (PPDA) had called for the strike to obtain a four percent increment on their profit margins (they had demanded that the margins be increased from two to 6 percent). Only a few Company-Operation petrol pumps had remained operational across Pakistan on 25 November, which offered some relief to customers but the long queues and the general social panic persisted regardless.

the petroleum strike was called off by the PPDA later the same day as the government and the association members came to terms on a revised profit margin of 4.4 percent. However, whether this new margin will impact the prices of fuel remains to be seen. 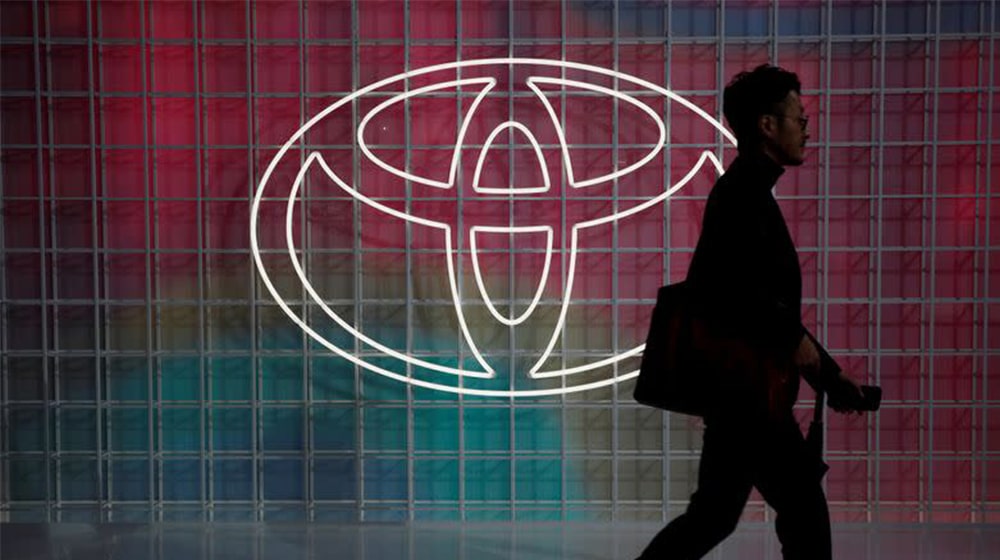 This was announced during the Toyota IMC’s Corporate Briefing Session held earlier in November. On its agenda was the company’s financial results in Q1 FY22 as well as its current standing and future strategy with the participants.

The Chief Executive Officer of Toyota IMC, Ali Asghar Jamali, reported during a Q&A session that the company is at an advantage for dealing with the shortage of the semiconductor microchip as it has a decent amount of inventory in stock. He added that the shortage will not be of any consequence for the company, at least until mid-2022.

Nonetheless, Jamali highlighted that the prices of raw materials are on the rise these days, the impact of which will be reflected in the vehicle prices. 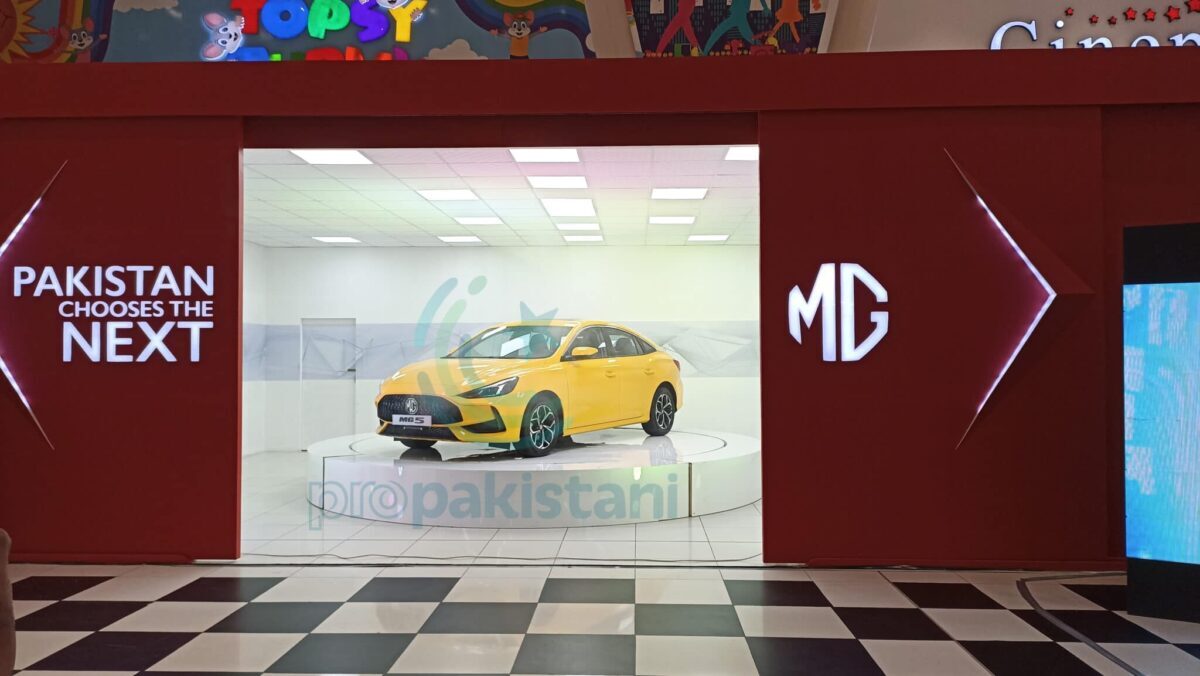 MG seems to be monitoring the market preferences closely by placing multiple vehicles on display at various dealerships across Pakistan.

The company recently displayed several vehicles at dealerships across Pakistan, including the MG GT and the HS 2.0T AWD in Sialkot, the MG 6 in Faisalabad, the MG RX8 in Karachi, and the HS PHEV at a dealership in Lahore. Although these vehicles gathered a lot of attention, the showstopper among them was clearly the MG 5.

The MG 5 — dubbed the MG GT (for Pakistan) — has been a hot topic among auto savants once again, since it went on display this weekend. It is a C-Segment compact sedan that will rival the Toyota Corolla, the Honda Civic, and the Hyundai Elantra upon its arrival in Pakistan.

The yellow MG 5 at Packages Mall is an imported left-hand drive, 1.5-liter, naturally aspirated, non-turbo variant with the 180DVVT badging on its rear. The displayed version is the exact car that is expected to arrive in Pakistan, minus the left-handed-drive configuration and with a few different features.

The vehicle drew in a huge audience, and many are excited for its imminent launch in Pakistan. 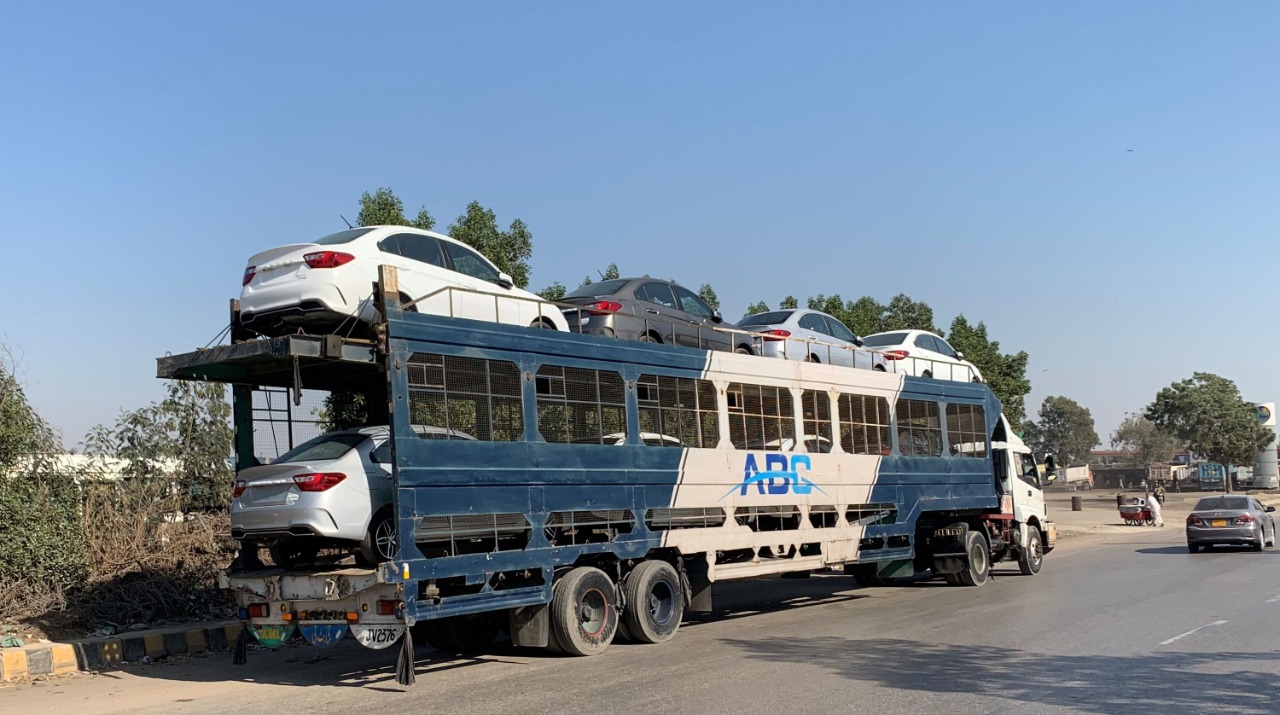 The supply-chain-related hiccups that occurred earlier this year, followed by the countrywide lock-down in Malaysia amid the pandemic played a huge role in stunting Proton’s growth in Pakistan.

The Proton Saga has a handsome value proposition in a market overwhelmed by expensive sedans and crossover SUVs. After a recent hike, its price starts from Rs. 2.149 million and tops out at Rs. 2.399 million.

It has a 1299 cc, naturally-aspirated 4-cylinder petrol engine that makes 94 hp and 120 Nm of torque. The engine will be paired with either a 5-speed manual or a 4-speed automatic transmission, depending on the trim-level.

The Proton Saga could be a fairly strong contender among the local B-Segment vehicles with several impressive features. Despite the recent price increase, it is still the cheapest sedan in Pakistan that is also a strong value for money product. 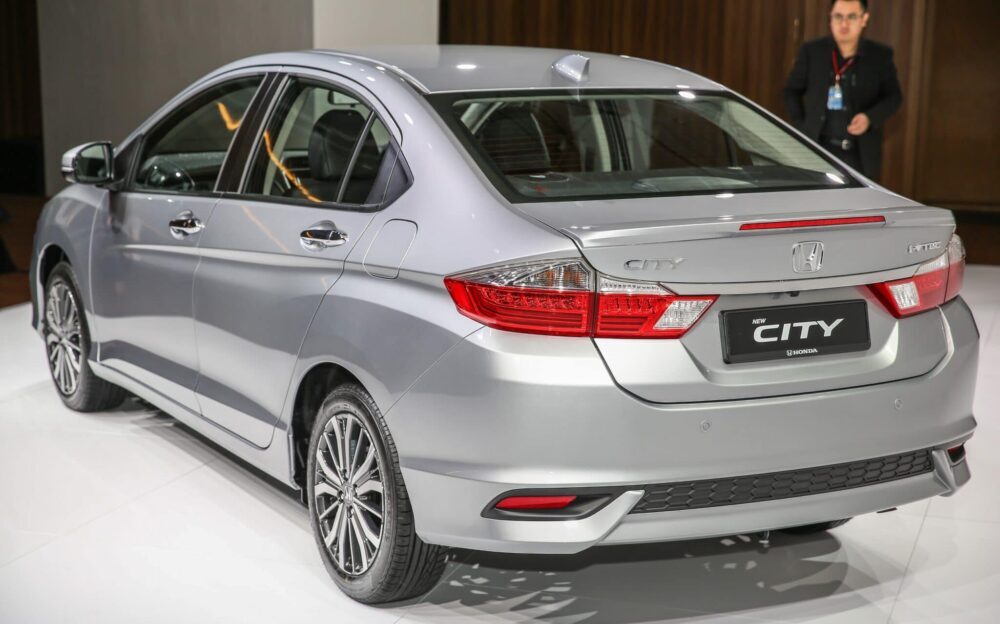 The demand for Honda Atlas Cars Limited (HACL) continues to soar high despite the price tags that would be deemed expensive by a majority of car buyers.

In the half-year time that ended on 30 September, the automaker posted an after-tax profit of Rs. 1.86 billion, with a YOY increase of 1180.36 percent or 11.8 times, compared to the same time last year.

The sales during the first half surged by 77.30 percent to Rs. 47.74 billion against the profit of Rs. 26.93 billion that was recorded in the corresponding period last year due to a recovery in auto sales after the easing of the pandemic-induced lockdowns. The revenues surged due to the increase in the sales volume to 16,765 units in the first half of the year.

Earlier this year, HACL launched the 6th generation City in Pakistan, which received a tremendous response from car buyers. It sold over 3000 vehicles in September and October, and its high sales figures were achieved mainly due to the sales of the new Honda City.

However, it is being speculated that the recent price hike is likely to dampen HACL’s momentum slightly as both the City and the Civic have now also become the most expensive sedans in the respective categories. 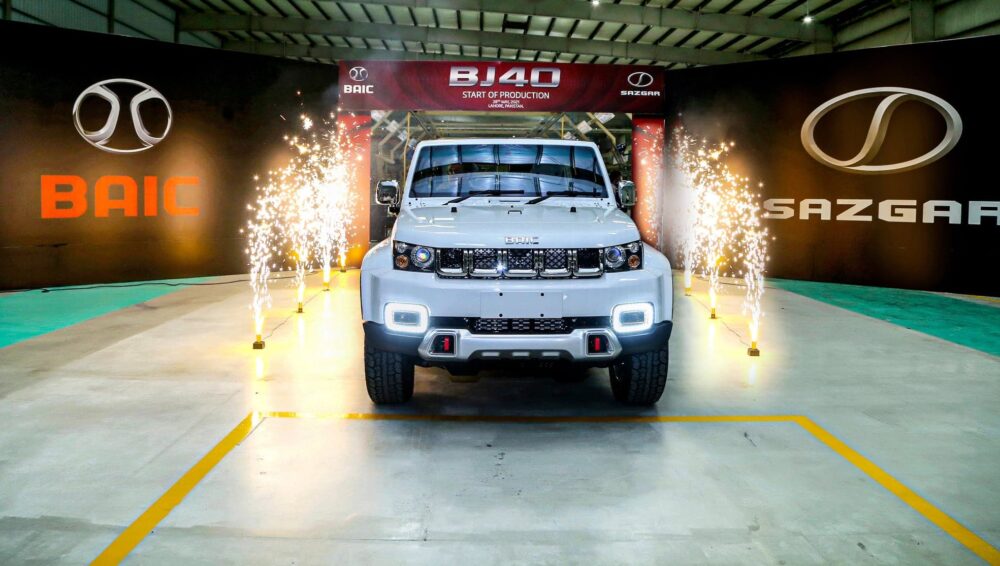 Speculations about BAIC’s launch in Pakistan had flooded online forums and car news outlets ever since its first viewing at the 2020 PAPS Autoshow, but the company now seems ready to make a splash in the Pakistani market with the launch of BAIC BJ40.

The BJ40 is a midsize off-road SUV that is a contemporary product amidst a sea of crossover SUVs. It has no direct competitors in the Pakistani market except for the Toyota Fortuner in terms of off-road capability.

It has a 2.0-liter turbocharged 4-cylinder petrol engine that produces 218 hp and 320 Nm of torque, all of which is sent to either the rear wheels or all four wheels (depending on the settings) via a 6-speed automatic gearbox. It also has a low-range mode and lockable differential that allows for hardcore off-roading.

Along with its distinctive appearance, the BJ40 has proper adventure-vehicle features such as detachable doors, a removable roof, and a foldable windshield.

All of these features come at a hefty price of Rs. 7.685 million, making the BJ40 the most expensive non-7-seater SUV in Pakistan. Although the BAIC BJ40 Plus only attracts a small niche of car buyers across the country, it is a positive addition to the market dominated by crossover SUVs.

The Kia Stonic was finally launched in Pakistan earlier in November to heaps of praise from the public.

According to the official details, Stonic will be launched in Pakistan in two variants — the EX and the EX+. Both the variants will be offered with the same powertrain — a naturally aspirated 1.4-liter 4-cylinder petrol engine that produces 98 hp and 133 Nm of torque, and the power will be sent to only the front wheels via a 6-speed automatic gearbox in both variants.

The Stonic is a total package for a family of five, and can be had for a relatively reasonable price tag that starts from Rs. 3.66 million and goes to Rs. 3.88 million; and its attractive features, added practicality, and reasonable price tag all make it a formidable opponent in the market.