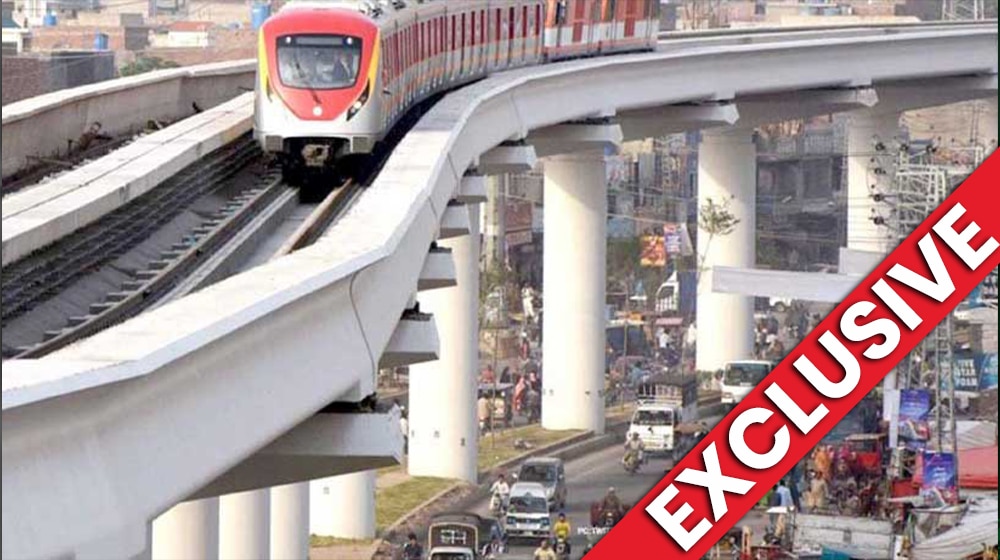 The National Accountability Bureau (NAB) has approached various concerned ministries/divisions for a legal opinion, as it has launched a fresh probe into the $1.626 billion Lahore Orange Line Metro Train Project under the China Pakistan Economic Corridor (CPEC).

A letter written by the National Accountability Bureau, Islamabad, to Secretary Cabinet Division, Secretary Law Division, and Secretary Planning asked for the legal opinion on a query related to the status of the ECNEC approval in the Lahore Orange Line Train Project under the CPEC.

The Orange Line Metro Train-Lahore comes under the CPEC umbrella, which was jointly financed by the Government of Pakistan and the Government of China. The total cost of the 27.12 km long metro train was $1.626 billion. The construction of the project began at the end of 2015, and it was inaugurated in October 2020.

It is worth mentioning that earlier in April 2021, the NAB Rawalpindi had started a probe against Lahore Orange Line Train Project with a different angle. Earlier, the NAB was probing the inclusion of provincial projects into the CPEC framework and tax exemptions related issues. However, now in the new letter written in December 2021, the dimensions of the inquiry have changed.

As per the letter, “Provision of Information u/s 19 of NAO 1999-Inquiry against officers/officials of Lahore Development Authority (LDA), NESPAK and others,” written by NAB and available with ProPakistani, it has been stated that “The Bureau is conducting an inquiry under the provision of National Accountability Ordinance 1999. During the course of inquiry proceedings, it revealed that the Executive Committee of the National Economic Council (ECNEC) approved the PC-1 of the Orange Line Train in April 2015 with the total amount of $1,626,238,587. Further, the cost of Civil Work was estimated at $535,641,720 by NESPAK on the basis of engineer estimates, and subsequently, a Mega Project Allowance of $22,262,696 (16 4 percent of the construction cost of civil works) was incorporated in the cost summary of PC-1.”

The letter further questions, “Does approval of ECNEC justify the allowance, if any, incorporated in PC-I, irrespective of the fact that they are as per rules or not? Does the approval of the ECNEC supersede the financial rules of the province?” 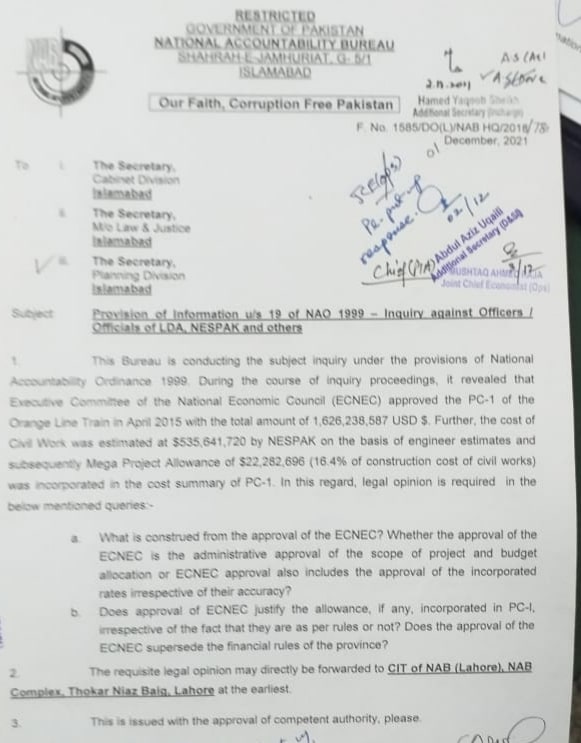 The requisite legal opinion may directly be forwarded to the CIT of NAB (Lahore), the letter stated. Sources said the Planning Commission has yet to reply to the letter.