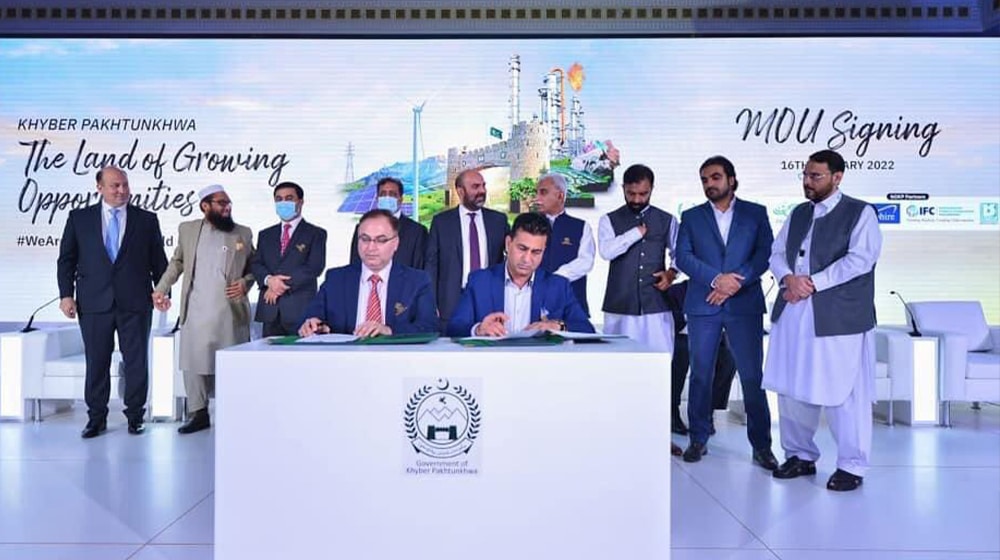 The Government of Khyber Pakhtunkhwa (KP) has signed memorandums of understanding (MoUs) with 44 international investment companies at the Dubai International Expo 2020.

After due formalities are completed, fresh deals are expected to contribute an overall investment of more than $8 billion in various sectors. The investors included several Pakistanis located in the United Arab Emirates, who were intrigued by KP’s integrated tourism zones, water sports in the Hund region of Swabi district, energy and power, food processing, cattle, and infrastructure.

According to an official statement, Kuwait-based Enertech-Kuwait Investment Authority (KIA) will invest $120 million in the installation of a hydrogen power plant under the terms of the MoUs. It will generate hydrogen from water, which will be transported through containers and used to produce energy. Moreover, KIA has signed another MoU for an investment of $2700 million in Khanpur’s sustainable development.

The Korea Hydro and Nuclear Power Company agreed to invest $1,200 million in the Lower Spath Gah project. (The Korea Electric Power Corporation is a subsidiary of this firm).

A private business called the SE Alphine Group agreed to invest $150 million as part of a public-private collaboration to build a ski resort in Kalam. China’s Gezhouba Group Corporation penned a deal to invest $250 million in a transmission line between Chitral and Chakdara in Lower Dir. Another private company, Zonergy, invested $300 million in the province’s solarization of government buildings and the development of a PV manufacturing facility.

The Karachi-based Al Raee Group of Companies will invest in the tourism sector, according to the announcement, and it plans to invest $10 million in a four-star resort in Bahrain, Swat.

The company SC Alpine Resort Private and Parties inked a $200 million MoU to develop a ski resort in Kalam. Furthermore, Tulip Hotels is committed to investing $90 million in solar park development, and the Virtual Smart System has promised to invest $50 million.

Speaking at the expo’s MoU signing ceremonies, KP’s Minister for Finance Minister, Taimur Saleem Jhagra, announced that the provincial government is also emulating the UEA model to increase foreign tourism in the province. He added that the projects have already been prepared for their presentation at the expo, and there is a lot of room for investment in KP’s tourism sector.

The minister acknowledged the importance of integrated tourism zones for the promotion of tourism in KP which is the only province that, under a public-private partnership, constructed the first freeway (motorway) which connects Swat to the rest of the country.

Addressing the occasion, Additional Chief Secretary Shahab Ali Shah stated that the government is ready to assist investors in every way possible and to give investors a single point of contact besides other related services.