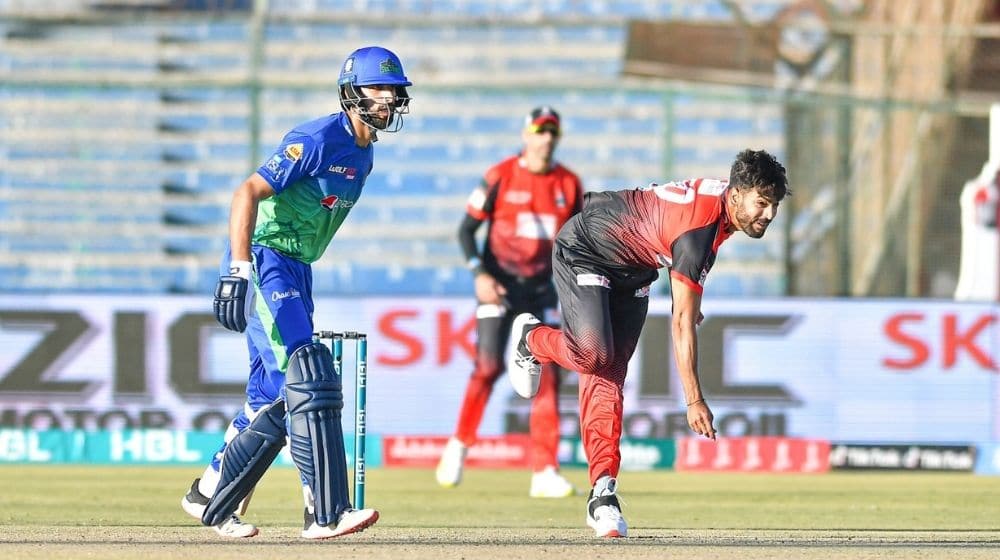 Multan Sultans registered their second consecutive victory of PSL 2022 as they pulled off an epic run-chase against Lahore Qalandars in the third match of the tournament. Multan sit comfortably at the PSL points table with 2 wins out of 2.

Lahore started off the proceedings with a blockbuster start as Fakhar Zaman tore apart Multan’s bowling unit with a quick-fire fifty. He was ably supported by Kamran Ghulam who scored 43 and a late flurry from Rashid Khan and David Wiese helped them put a massive to9tal of 206/5 on the board.

Multan’s openers, Mohammad Rizwan and Shan Masood came with the intention of spoiling the Qalandars party. The duo put on an opening stand of 150 runs, Multan’s highest in PSL history and set the perfect platform for the incoming batters to take them home. Lahore’s captain, Shaheen Afridi almost pulled Lahore back into the game with a fantastic penultimate over but Khushdil Shah smashed Haris Rauf all over the park in the last over to pull off an outstanding run-chase.

Shan Masood was named as the player of the match for his scintillating knock of 83 off 50 balls. His innings included 14 fours and one six.

The Pakistan Super League (PSL) 2021 defending champions, Multan Sultans, will take on the PSL 5 finalists, Lahore Qalandars, in the third match of the PSL 2022 on Saturday, 29 January.

The match, scheduled at Karachi’s National Stadium, will start at 2:30 pm PST.

Multan Sultans will be determined to continue their winning run as they face Lahore Qalandars in a blockbuster encounter at National Stadium Karachi. Multan dismantled Karachi Kings in the opening match of PSL 7 on Thursday and looks like the team to beat in this year’s PSL.

Lahore, on the other hand, will be looking to overcome yet another disappointing run in the previous edition. With a new captain in charge, Lahore will be determined to upset the current champions.

Lahore possesses one of the most lethal bowling attacks in the league if not the franchise T20 leagues around the world. The likes of Shaheen Afridi, Haris Rauf, and Rashid Khan can destroy the opposition batting line-up at a whim and win the match for their team within a few overs.

Multan has a well-balanced side and with the sublime run of form of their captain, Mohammad Rizwan, and the self-belief within the dressing room, they look set to become the first side to retain their PSL title.

Multan is not expected to make any changes to their line-up from the previous match while Lahore will be looking to establish a winning combination early on in the tournament.

Overall, the two sides have come face to face 9 times in the tournament. Sultans have an upper hand over Lahore as they have won 5 while Lahore has won 4. They last faced each other on 18 June 2021 in Abu Dhabi; Multan won it by 80 runs.

Lahore’s x-factor is their world-class bowling attack particularly, Rashid Khan. The Afghanistan all-rounder is one of the most sought-after franchise T20 players and his undeniable quality is a dream for a team to have. In Multan’s perspective, Mohammad Rizwan is in the form of his life. He led a master-class run-chase against Karachi Kings and will be looking to play yet another match-winning knock for his team.