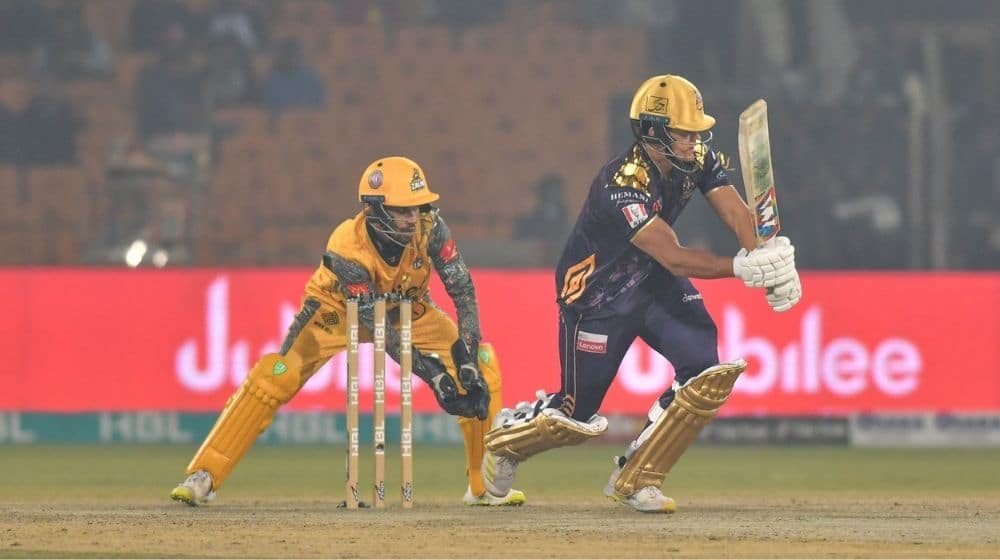 Peshawar Zalmi defeated Quetta Gladiators by 24 runs to leap frog them into the fourth spot. Quetta move down to the fifth spot after suffering their fifth defeat of the season.

Zalmi got off to a terrible start as they lost Hazratullah Zazai and Liam Livingstone to Naseem Shah in the first over of the innings. Shoaib Malik and Hussain Talat orchestrated a comeback as they steadied the ship for Zalmi. Australian all-rounder Ben Cutting lit up Gaddafi Stadium as he struck huge sixes at the backend of the innings to take the total to 185/7.

Quetta too got off to a bad start as they lost Jason Roy and James Vince early on in the innings. Will Smeed and Sarfaraz Ahmed rebuilt the innings before Usman Qadir struck with quick back to back wickets to bring Zalmi back into the game. Smeed was the lone warrior for Quetta but he too perished after a brilliant innings of 99 runs. Peshawar restricted Quetta to 161/8 and won the match by 24 runs.

Hussain Talat was named as the player of the match for his all-round performance. He scored 51 runs off 33 balls and finished with figures of 1/8 in 2 overs.

Quetta Gladiators and Peshawar Zalmi will lock horns in the 22nd match of the Pakistan Super League (PSL) 7. The two teams will battle it out against each other at the Gaddafi Stadium, Lahore at 7:30 pm PKT on Tuesday, 15 February.

The battle for the coveted fourth spot heats up as Peshawar Zalmi and Quetta Gladiators battle tonight at Gaddafi Stadium, Lahore. A win for either team in the all-important clash will take them two points clear of the fifth position and it could be a virtual knock-out with just two more group stage matches to go.

Quetta Gladiators will be hoping to bounce back quickly after their disappointing loss to Lahore Qalandars in their previous outing. They will be determined to get back to winning ways and get one foot into their first PSL play-offs in three years. While Quetta has been unlucky with a number of players being ruled out of the tournament, they still have enough firepower to defeat any team in the competition.

Peshawar Zalmi on the other got back to winning ways as they defeated Karachi Kings in their previous encounter. The Yellow Storm will be hoping that they put in a similar performance and move up to the fourth spot. Peshawar is the only team in the running to make it to all the PSL playoffs. They look like a real threat with players coming back into form at a crucial stage in the tournament.

Both the teams are likely to name an unchanged XI.

Overall, the two teams have come face to face 19 times in the tournament. Zalmi have an upper hand as they have won 10 while Gladiators have won 8 and one match has ended in No Result. They last faced each other in PSL 7 on 28 January 2022 at National Stadium Karachi which Peshawar won by 5 wickets.

Jason Roy was unable to trouble the scorers as he fell cheaply in the last match. Roy is the spine of Quetta’s batting unit and he has the ability to take the game away from the opposition in just a few overs. Quetta will be hoping that Roy can be at his usual best against a strong bowling unit.

Wahab Riaz had a horrid time in Karachi but he has found his form in Lahore. Wahab is the leading wicket-taker in PSL history and he shares a huge chunk of the burden of Zalmi’s bowling unit. Zalmi will be hoping that Wahab continues his purple patch and can play an influential role to dismantle the opposition batting unit.