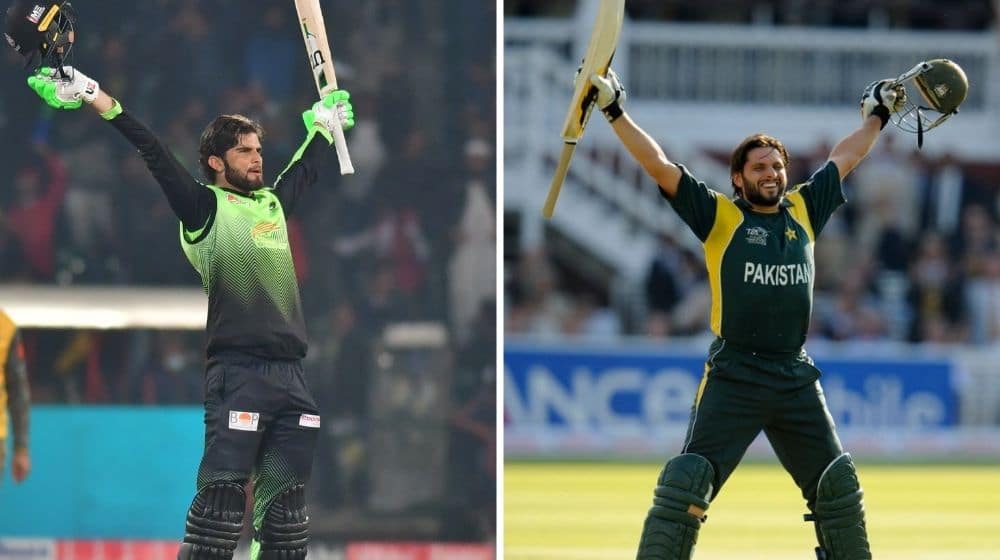 Shaheen Afridi shocked everyone as he showcased his talent with the bat in last night’s encounter between Lahore Qalandars and Peshawar Zalmi. Zalmi thought they had wrapped up the match as Lahore required 24 runs off the last over with two wickets in hand.

Shaheen, on the other hand, refused to give up as he struck 23 runs including three huge sixes in young Mohammad Umar’s over to tie the match and take it to a super over. He was exceptional with the bat as he scored 39 runs off 20 balls including 2 fours and 4 sixes. This is Shaheen’s highest score in T20s.

Unfortunately for Shaheen, Lahore were unable to win the match in the super over as Wahab Riaz bowled a magnificent over to restrict the Lahore batters.

Nevertheless, the 21-year old’s blistering knock brought the crowd at Gaddafi Stadium to life as the fans across the globe compared him to the legendary Shahid Afridi.

Is @iShaheenAfridi secretly getting coaching lessons for power-hitting from @SAfridiOfficial 👨‍🏫

Former Pakistan captain, Shahid Afridi himself took to Twitter to appreciate the magnificent knock. He uploaded a picture of Shaheen’s winning knock alongside his own picture and captioned the image, “Shaheen Afridi you beauty!”

Here are some other fantastic comparisons between the two cricketers:

Afridi is back…and this time shaheen shah afridi. What a knock what a finish❤❤❤😍 #ShaheenShahAfridi #MiniBoomBoom pic.twitter.com/fWIxJx5W1k