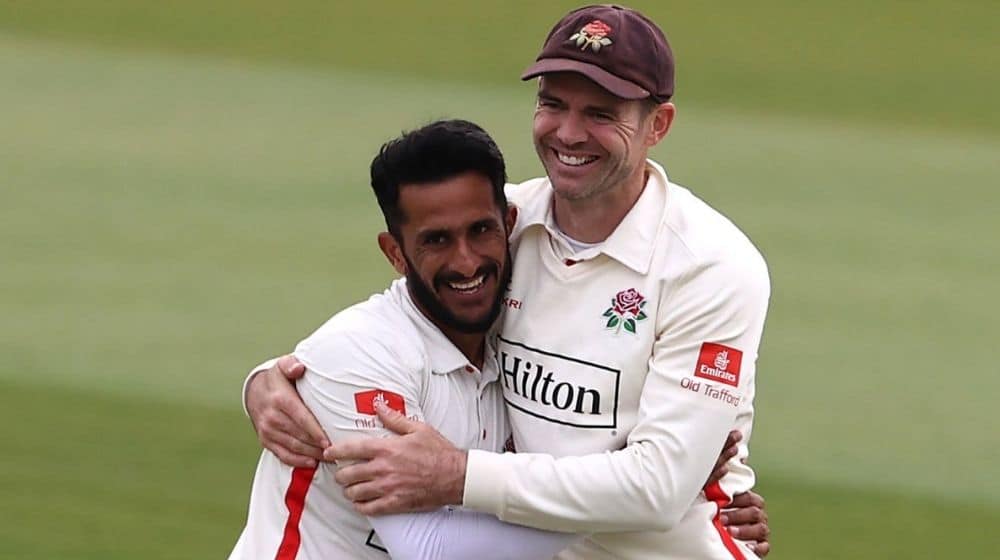 Legendary England seamer, James Anderson, lauded Hasan Ali’s impact in the ongoing County Championship season. Anderson said that Hasan has got some serious skills and he has enjoyed bowling alongside him for Lancashire.

Anderson, while talking to BBC Radio 5 Live, showered praises on Hasan Ali for his love of the game and his magnificent bowling spells so far in the season. Anderson said that Hasan is a great person and a great bowler who gives everything he has every time he comes to bowl. He said that Hasan is deceivingly fast and looks to make things happen with every delivery.

England’s highest wicket-taker in Test cricket remarked that he has learned a lot of new stuff from Pakistan’s ace speedster.

“You can learn a lot from people you haven’t played with before when you see how they operate and see the different things they do. Although he’s been asking me a lot of questions about what I do, I’ve also been watching him and learned some stuff from him,” Anderson stated.

The 39-year-old said that Hasan has been a thorough professional throughout the campaign and his exceptional performances have had a major impact on the combination of the team. He stated that Hasan was rightly rewarded for his performances by winning Lancashire’s player of the month award.

The experienced pacer further added that signing an overseas player is always a risk as their true motivations behind playing county cricket can never be known. He said that the players sign up for county to either gain experience of the conditions or are motivated by money but the scenario with Hasan is completely different as he is playing purely because of his love for the game.

Anderson said that Hasan is always willing to give his all for the team and makes no excuses whatsoever. He never complains of being tired and is readily available whenever the captain asks him to bowl.

Hasan Ali is currently the leading wicket-taker in division one of the County Championship. He has picked up 24 wickets at an average of 18.50 in 4 matches.