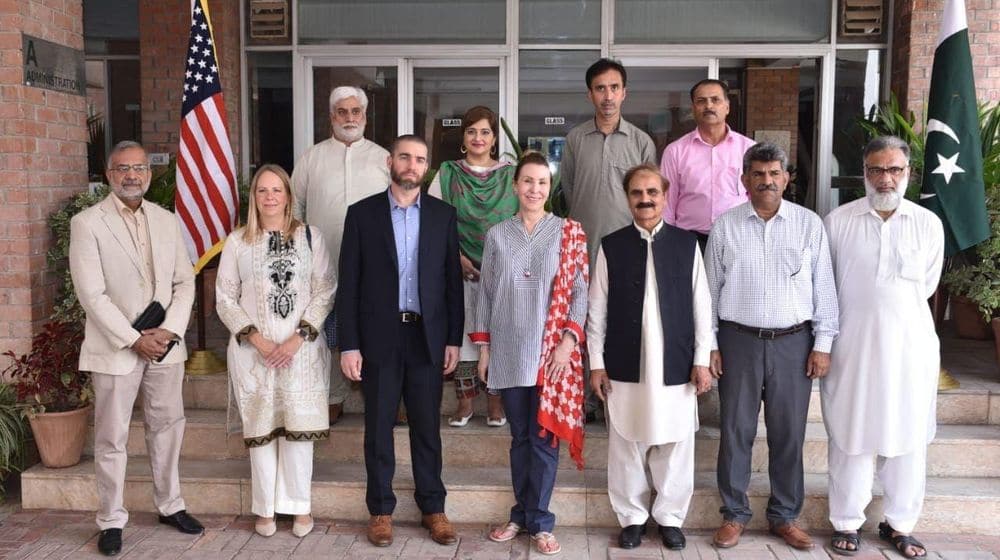 A special delegation from the Government of the United States of America visited the National Agriculture Research Center (NARC) in honor of 75 years of relations.

Mission Director United States Agency for International Development (USAID), Julie Koenen, remarked on the occasion that the relations between Pakistan and the United States of America are profound and will improve with every passing day.

Koenen commented that “the partnership between Pakistan and United States has boosted the strength and prosperity of the Pakistani people in various fields including the agricultural sector”.

She added that the United States has worked closely with Pakistan since the 1950s to improve the economy and feed the growing population by procuring state-of-the-art equipment, improving agribusiness management practices, increasing the amount of irrigated land, and assisting in establishing major agricultural research fields.

She mentioned that USAID is delighted to continue supporting the agricultural sector for inclusive economic growth.

“Together, we will continue to strengthen communities and build a more prosperous and resilient Pakistan,” she stated.

Chairman Pakistan Agricultural Research Council, Dr. Ghulam Ali, received and welcomed the American delegation on the occasion. He thanked the delegation and commended the two countries’ strong and result-oriented relations.

“Pakistan and the US have been working together not only at blissful but hard times as well; and I hope both the countries will enjoy this relation in the future, which would strengthen the Pak-US partnership bond,” he added.

Dr. Ali shed light on America’s assistance and cooperation with Pakistan and said that it had spent $27.8 million between 1974 to 1985 for strengthening agricultural research in Pakistan. The main project elements comprised technical assistance, training, commodities, and nationally coordinated research programs for major agricultural commodities/disciplines.

The National Agricultural Research Center (NARC) was constructed in Islamabad under this project.

He said that the US had assisted with $38 million, for developing human resources and stretching institutions in the mid-1980s. It has spent $23.2 million on the Agriculture Linkages Program from 1999 to date to promote long-term scientific cooperation with Pakistan.

From 2013 to 2017, $30 million was spent on the Agricultural Innovation Program to expand agricultural science and technology innovations.

Koenen also planted a tree at the NARC and extended best wishes and her appreciation.

The NARC at a Glance

The NARC Islamabad was established in 1984 and is the largest research center of the Pakistan Agricultural Research Council (PARC) with a total land area of approximately 1,400 acres. Its physical facilities include experimental fields, laboratories, greenhouses, a gene bank, a library, an auditorium, machinery and laboratory equipment repair workshops, stores, hostels, a cafeteria, audio-visual studios, etc.

The NARC campus hosts many offices of international partners like CIMMYT, ICARDA, ILRI, IRRI, FAO, etc., and was constructed in Islamabad in the 1970s under this project. Additionally, 197 participants were sent abroad for advanced degrees and for short-term non-degree training under the participant training component. Begun in the mid-1980s, it is a major endeavor to increase the effectiveness of Pakistan’s agricultural research system, develop its human resources, and strengthen its institutions.

The program builds partnerships with public and private institutions for sustainable development and applies innovative agricultural technologies to stimulate the growth of the agriculture sector.