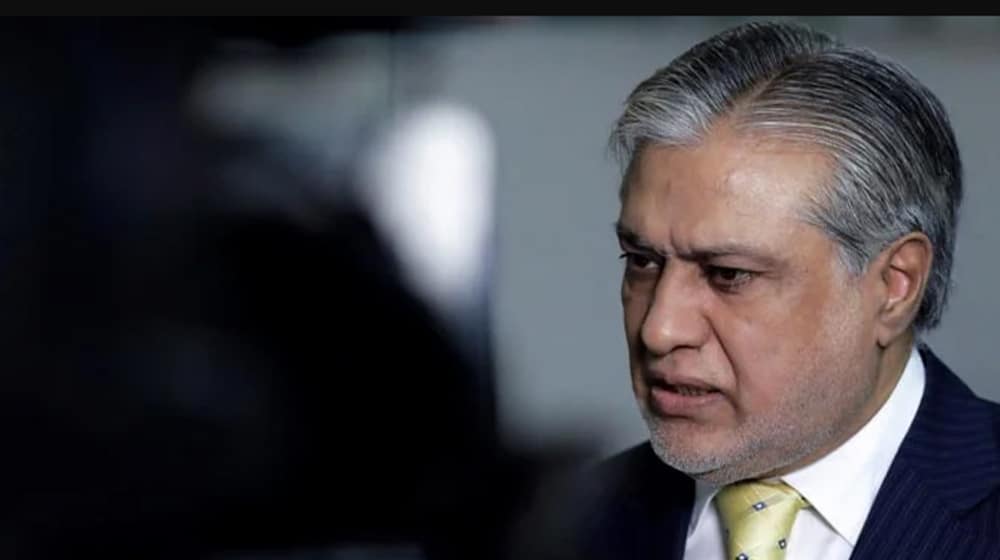 Ishaq Dar is back as Finance Minister, vowing to rescue an economy that’s been grappling with decades-high inflation, dwindling reserves, and … well, a falling rupee. Dar is widely known for keeping the USD-PKR exchange rate under control, but his immediate priorities will likely go beyond just arresting the domestic currency’s devaluation.

Dar takes the Finance Ministry charge amid global macroeconomic challenges that might add to his worries as he seeks to steer Pakistan out of economic turmoil. Rising interest rates across the world and the Russia-Ukraine war have rocked markets, while recession fears and global inflationary pressures have dented consumer sentiment.

Ex-Finance Minister Miftah Ismail had to take some tough decisions, including reversing fuel and power subsidies that boosted oil and electricity prices in Pakistan. These moves, while unpopular among the public, were essential in restoring the much-needed IMF program at a time when some feared Pakistan might default. That program also paved the way for inflows from other countries as well.

However, party leadership seemed unhappy due to red-hot inflation that has dealt a significant blow to not only the masses but also the ruling coalition’s popularity. The other issue was a depreciating rupee against the dollar that attracted negative headlines.

Dar’s got a tough job at hand, especially as expectations mount that his administrative know-how would help undo some of the economic pain. Here’s what his immediate priority list, not necessarily in the same order, is likely to look like:

Dar is widely credited with keeping the local currency stable between 2013 and 2017. The local currency has recovered by Rs. 7.53 against the dollar in the first three trading days of this week.

As part of his agenda to protect the local currency, Dar could place more restrictions on dollar transfers through foreign currency accounts, traveling, and credit cards to dampen demand for the greenback, Topline Securities CEO Mohammed Sohail told ProPakistani. Others in the industry have suggested a crackdown against speculators and dollar smuggling as potential means to discourage unfair profit taking.

It is worth highlighting that the Dollar Index has posted monthly gains so far this year, with the exception of May, when the index fell. As the dollar becomes stronger, it devalues domestic currencies. In addition, the IMF wants Pakistan to maintain a market-determined exchange rate and “avoid suppressing any trending movement,” it said in a Sept. 1 report. The IMF said Pakistan should limit any interventions in the foreign exchange market.

Bringing down prices will be a massive undertaking, especially in the aftermath of recent floods that are only expected to fuel inflation.

Consumer prices topped 27.3 percent in August from a year earlier, higher than a nearly 25 percent jump in July, the Pakistan Bureau of Statistics reported. Arif Habib said on Sept. 1 that it was the highest level since 1973.

“Inflationary pressures are expected to further aggravate due to supply chain disruptions and shortage of perishable items,” the Planning Commission said in a recent report. It pegs inflation to average between 23 percent and 25 percent in FY23, compared with the target of 11.5 percent. The IMF projected inflation to spike to 19.9 percent in FY23.

Let’s bear in mind that a stronger dollar makes repayments and imports more expensive in domestic currency. In addition, Dar believes in low-interest rates to help stimulate economic activity, though, on the flip side, low policy rates are known to boost inflation.

A glimmer of hope exists that a drop in oil prices in international markets may be passed on to consumers, but an agreement with the IMF to raise the Petroleum Development Levy could complicate the government’s ability to lower fuel prices.

The current state of reserves and future trade projections present a rather gloomy picture, suggesting the country is in dire need to quickly boost exports. However, market participants doubt if that’s a near-term possibility, arguing that cutting down on imports will likely be the go-to option for managing the overall trade deficit.

“[It’s] not possible to boost exports in the short run,” Sohail said. “What (Dar) can do is … restrict imports to reduce (the) trade gap”.

Pakistan’s foreign exchange reserves have plunged 58 percent since August 2021 to $8.35 billion as of Sept. 16, according to State Bank of Pakistan data. The Pakistan Bureau of Statistics reported that the trade deficit soared nearly 56 percent annually to $48.39 billion in FY22, with imports at more than double the level of exports. Our imports continued to outpace exports in the first two months of FY23. 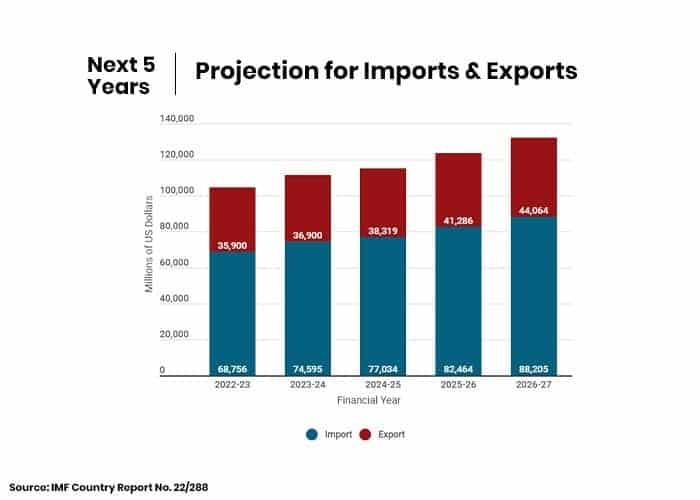 Exports are likely to take a further hit as a result of the damage to major crops like rice and cotton, as well as fruits and vegetables, while imports of raw cotton, wheat, and vegetables are expected to increase due to flood losses, according to the Planning Commission.

The Planning Commission sees economic growth slowing to between 1.8 percent and 2.3 percent this fiscal year, compared with the 5 percent target, as the recent floods have disrupted the agricultural, industrial, and services sectors. These floods are estimated to cost $28 billion and result in a loss of 1.8 million to 2 million jobs.

It’s tough to stimulate activity at a time when economic momentum is fading, unemployment is rising and sentiment remains fragile, especially as 9 million to 12 million additional people are estimated to fall below the poverty line.

The government has said reviving the supply of raw materials to industries will take longer than six months, while small businesses are at risk of a collapse. In addition, authorities lack suitable planning for an expected mass migration to urban centers as a result of floods.

The above scenario makes for an extremely challenging backdrop. While recent foreign aid should help, the road to recovery will be a bumpy one. As already mentioned, low-interest rates could support economic activity, but will also add to inflation woes.

The government could consider announcing some form of support for the unemployed and small businesses, assuming it’s financially viable at this stage. Nevertheless, the country must enable an urgent restoration of infrastructure and a quick revival of the industrial sector. That might cause short-term pain to our finances, but taking a long-term view would be the right approach.