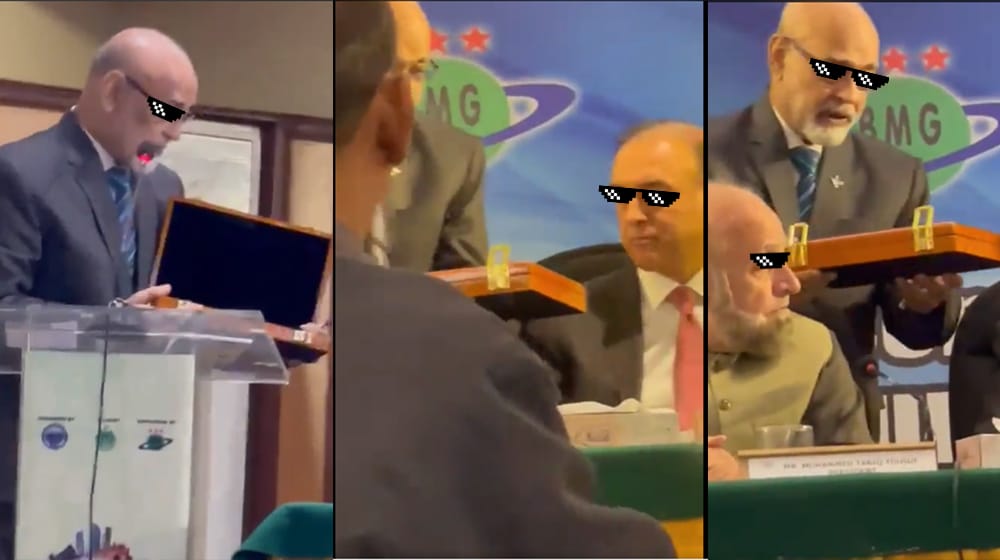 Members of the Karachi Chamber of Commerce and Industry (KCCI) made life hell for State Bank of Pakistan (SBP) Governor Jameel Ahmad, pelting sweet insults against his office and gifting him a ‘special key’ over the imposition of import restrictions.

Traders during a town hall on Wednesday showed zero sympathies for the central bank chief for allowing 5,700 containers laden with food, medicine, and industrial raw materials to rot at port for months and incurring thousands of dollars in demurrages for local businesses.

It was informed during the meeting that banks are not opening letters of credit (LCs) for the majority of imports and name SBP as the main culprit behind such directives. Reduced dollar outflows have brought a wide range of import-dependent industrial activity to a halt across the country, and the central bank isn’t making anything better in the meantime.

One KCCI delegate handed the SBP governor a giant key in a pristine box as a visual demonstration of industry closure. The governor evidently shuddered in his seat and awkwardly refused to accept it without making eye contact.

Similarly, an importer of the perfume used in the production of soap told the governor that his promise of better days was little more than a lollipop. “The issue is your intent,” he stated flatly. The businessman claimed that banks are not processing his import documents, despite the fact that his long-term overseas supplier has extended credit for a year. “I don’t need your money in the least. So, what’s the hold-up?”

Another trader looked the governor in the eye and admitted to paying a $2,000 bribe to central bank officials in order to obtain approval for a dollar payment. The governor got upset and returned with a steamy reply but the businessman gunned back by saying he kept the receipts.

Upset and ears crimson, the SBP Governor said the bank was addressing a current backlog of over 11,000 import payment cases and was working on a quick fix. Jameel Ahmed asked the KCCI leadership to provide SBP with more info about the withheld imports and the sector-specific values of pending payments.

Former KCCI president Zubair Motiwala urged the SBP governor to release all stranded 5,700 containers. He also demanded the elimination of detention, container, and customs fees. “There are 75 containers of onions stuck at the port. Their demurrage is now greater than the cost,” he said, referring to the penalty imposed for not discharging a ship on time.