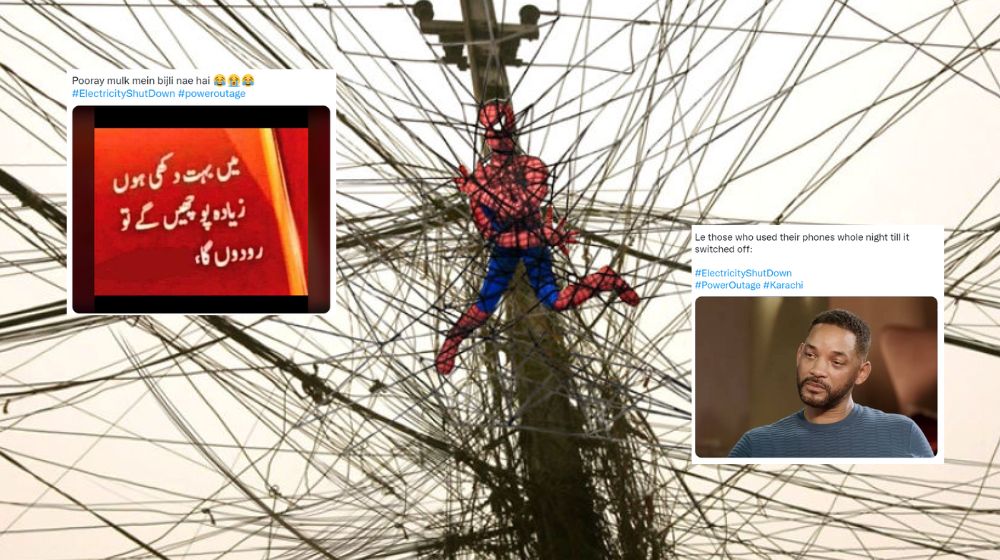 Pakistanis have a knack for finding joy in difficult situations. Regardless of the gravity of the issue, Pakistanis brave every adversity with a smile on their faces thanks to their unparalleled humor.

This very habit was on display yet again as the country woke up to a power breakdown earlier today. The national grid developed a technical issue at 7:34 AM, resulting in a power outage in most parts of the country.

Let’s have a look at some of the top Twitter reactions to this power outage.

This was the first thought that came to the minds of most Pakistanis when they noticed the electricity shutting down at an odd time.

As always, everyone just hopped on to their go-to social media platform to confirm the countrywide power outage.

Everyone running to twitter to confirm it's #poweroutage across😂#ElectricityShutDown pic.twitter.com/9VRX5JZNxO

As the word spread, people started contacting their loved ones across the country to confirm that they are not alone in this power outage.

Desi relatives to each other on phone calls right now after #poweroutage: pic.twitter.com/UxojYM0aIe

Those who stayed up late last night browsing the internet had no idea of the surprise they got this morning.

The people who are awaking with the battery percentage of only 10% #poweroutage pic.twitter.com/YyyZeCOFPT

Some unlucky ones drained their mobile batteries.

Le those who used their phones whole night till it switched off:#ElectricityShutDown#PowerOutage #Karachi pic.twitter.com/dlrJRXzfx8

They themselves are on the verge of a breakdown.

Everyone is now waiting for the fault in the national grid to be restored.

Me waiting for light to be restored so I can charge my phone#poweroutage #ElectricityShutDown pic.twitter.com/YsmVRy4IOH

Authorities have stated that it will take several hours to resolve the issue.

mood for next 30 hours ! #poweroutage pic.twitter.com/lRYm3iEOlk

Not me going to a restaurant and eating kababs just to charge my phone :)#poweroutage pic.twitter.com/HIMV9bfvGl

Citizens with solar-powered homes aren’t worried about anything.

For some lonely souls out there, their lives remain unchanged whether or not there is electricity.