Biriyani with or without alu? Let's discuss this without offense
Skip to content
Food Deals 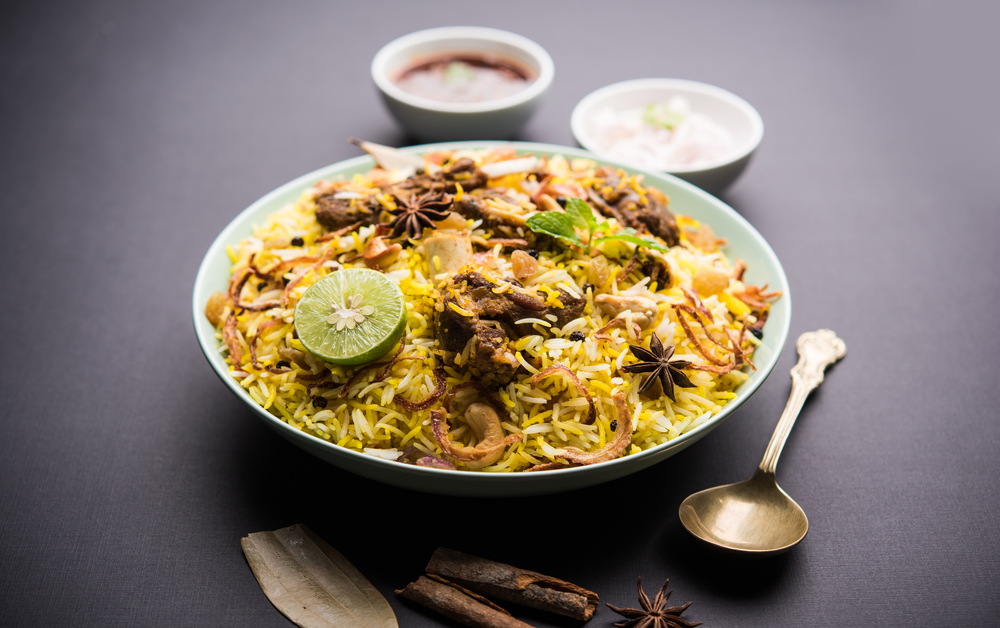 Being desis, our sentiments for biriyani are 100% justified. The emotions that we have for biriyani gave rise to one of the most heated arguments in the past decade. “Biriyani with or without alu”. Everyone feels like they have a right to biriyani and only they know what authentic biriyani tastes and looks like. Sounds troublesome right? Well, it is troublesome, once this debate starts, there is no putting an end to it without hurting someone’s feelings. This article will explore the details of the biriyani debate which is a delicate topic for all of us. We are all free to have our own opinions but there is a need to weigh both arguments and I am all in to do that.

Beginning Of The “Alu Kyun?” Debate 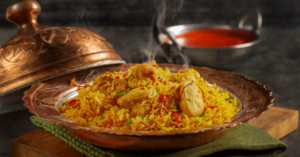 An American standup comedian, back in the year 2017 started this debate without realizing the sensitivity of this issue. McLellan did a poll on Twitter in an attempt to settle the debate but only ended up making it worse. Soon after that, social media flooded with opposing opinions which even led to personal grudges among people. Both the opposing parties were adamant on their stances and were not (are still not) willing to move even an inch from their opinion. The “with alu” party stated that anything without alu is incomplete and alu only enhances the flavor of biriyani.

The other party, the “no alu” party bashed them about not knowing the authentic biriyani recipe. Now, this is hard to hear for any foodie who loves their biriyani with every cell in their body (yup, I’m talking about myself).

There’s No Reason To Say No To Alu 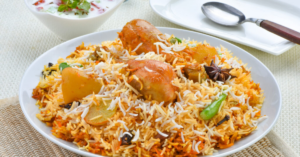 Alu in biriyani is in no way less than the chicken added into it. The mushy sweetness of potatoes perfectly pairs with the tangy flavor of rice making it a dream combination. Not only taste-wise, but alu biriyani is better than the no alu biriyani nutrition-wise also. The high carbohydrate concentration of potatoes makes it a filling food. the resistant starch in potatoes also helps to decrease insulin resistance in the body. The butyrate produced by resistant starch reduces colon inflammation and strengthens the defense. Hard to deny all this right? 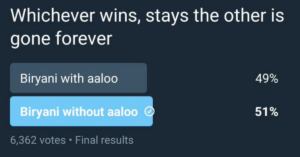 In January 2018, another poll regarding the same issue was done, fueling up the debate again. There was a lot of “blaming each other” especially between the Lahoris and the Karachites. The Karachi party favored biriyani with alu whereas the Lahoris were steadfast in their opinion that there is no purpose in adding alu in biriyani. However, biriyani without alu won from biriyani with alu by a very small percentage. This was a great setback for Karachites who consider themselves the authentic biriyani makers. Despite this temporary settlement of the issue, the debate is still a major point of conflict between the two cities. It’s not hard to understand both points of view because biriyani is sacred, you don’t get to bash people about how they like their biriyani.

The Bashing On Social Media 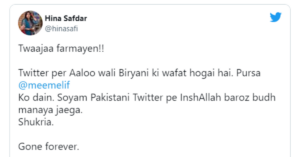 As soon as the Lahoris won this argument, there was an instant uproar of insults on social media. The 2018 poll continued for 5 days and during these 5 days, around 6,400 Pakistanis participated in the poll. On some days, biriyani with alu even took a lead from biriyani without alu so it can be rightly said that this was a tough competition. After 5 days, the biriyani without alu emerged as a king of all biriyanis making some people cry sad tears while others were brimming with happy tears. The participation and hype of this debate are exactly why this topic is so sensitive. 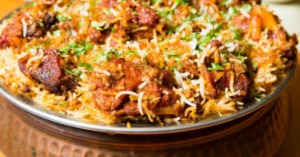 Despite various efforts over the past few years, the biriyani debate cannot be considered a settled debate. This wound is still as fresh for some people as it was the first day and by people, I mean Karachites. The foodies in Karachi entirely deny the debate and are not ready to accept such an insult of biriyani. Their “authenticity” has been challenged and they are in no way ready to compromise what they have believed for their whole life. The Lahoris, on the other hand, are so happy to care about the other party’s sentiments and can’t seem to get enough of their win.

Having discussed all this, I feel like one thing is necessary to be stated. Biriyani shall be celebrated rather than being debated upon because it is a glorious food. With or without alu, biriyani will always hold a special place in our hearts.