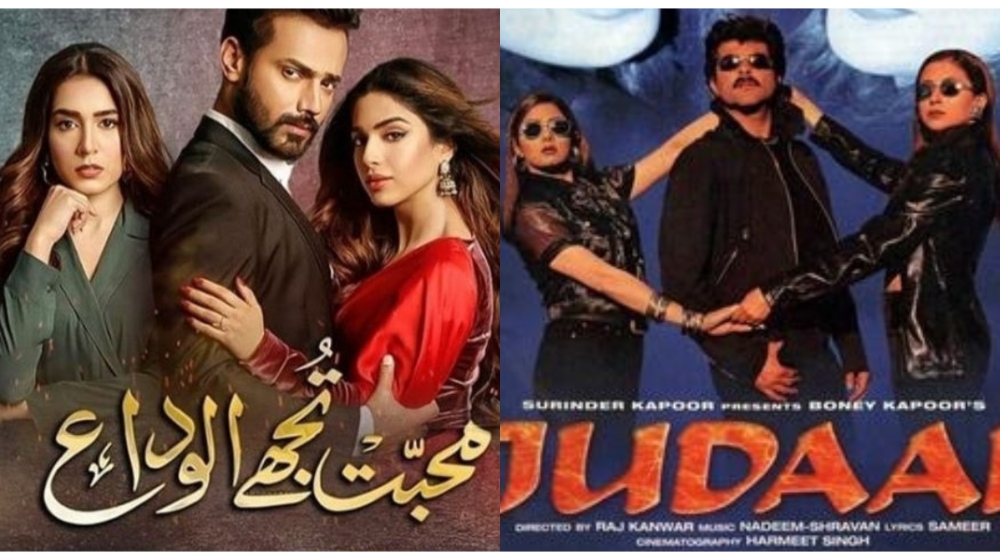 Recently all the teasers for the drama serial Muhabbat Tujhe Alvida have people pointing out how it sounds like the plot of Bollywood’s Judai.

Besides drama serial Dil-e-Beqarar having a similar plot, there have been plenty of serials with plots straight out of a Bollywood movie. Given the large audience of Pakistani drama serials across the border, that’s not a smart move.

Is Mohabbat Tujhe Alvida a Rip-Off of Bollywood Hit Judaai?

Rather than offer alternative content Indian audiences look for in Pakistani dramas, we’re killing that market by regurgitating Bollywood storylines.

Here’s a list of such drama serials that copied Bollywood storylines.

This serial from 2016, has a similar plot to Bollywood’s Judai. While the minor details were switched up like the lead character’s love story, circumstances of the second marriage, and the ending, it had the same vibe.

A woman (Hareem Farooq) pushes her husband (Junaid Khan) to marry his boss (Mansha Pasha) as a trade-off for a better lifestyle. When the excitement from the money gets old, she wants her emotionally unavailable husband back.

On the other hand, the boss lady has plenty of secrets that could end her marriage.

Written by Faiza Iftikhar, Hum TV’s Dil Banjara was a copy of Bollywood’s 1995 blockbuster Dilwale Dulhaniya Le Jayenge. The 2016 drama did try to switch it up by making a love square rather than a love triangle between the leads and the heroine’s betrothed.

Dil Banjara’s follows the story of a girl (Sanam Saeed) from a conservative family that falls in love with an eccentric character (Adnan Malik) on a trip abroad.

However, she’s engaged to a cousin (Hanana Sameed) and the male lead is also involved with another woman (Mira Sethi).

Adding another wheel to the love story didn’t hide the striking resemblance between Dil Banjara and Dilwale Dulhaniya Le Jayenge.

This ARY Digital 2018 serial was written by Edison Idrees Masih. The theme, story, and the characters were straight out of Bollywood’s superhit movie Saathiya, released in 2003.

Even a stellar cast including Sarmad Khoosat, Imran Abbas, Sajal Aly, Marina Khan could not overshadow the fact that this drama was a copy of a famous Bollywood movie.

This one will make your head spin. Drama serial Izteraab is a copy of Bollywood’s We Are Family (2010) which itself is a copy of Hollywood’s Stepmom (1998).

Written by Amna Mufti and aired on Hum TV in 2014, Izteraab follows a terminally ill mother (Saba Qamar) of two help the stepmom (Sania Shamshad) replace her in her family’s life. Initially, she is bitter towards the other woman who stole her man (Mikaal Zulfiqar), but also realizes later that she needs to leave behind a mother for her children.

At times she is even jealous of the relationship her kids have with the stepmom. However, she is glad they have a mother figure in their life when she’s gone.

Aired on ARY Digital in 2014, Koi Nahi Apna is the story of an unhappy wife  (Sarwat Gillani) who gets a divorce and even leaves her child behind. The story then follows the struggles of a single father (Fahad Mustafa).

The only difference between Koi Nahi Apna and Bollywood’s 1995 hit Akele Hum Akele Tum, is the gender of the child. Amir Khan plays a single father to his son in the Bollywood film. The drama and the movie ends with the couple reconciling and living happily ever after.

The two then embark on a trip to Dubai to look for Natasha’s ‘real love’. In the end, she stays with her husband who shows her love in the form of kindness rather than passion.

The popularity of Pakistani dramas in India is due to realistic storylines narrating the struggles of regular people. Getting the audience to relate to the characters is how drama serials like Zindagi Gulzar Hai, Aun Zara, Humsafar, etc gained international traction.

Art such as television serials reflects the societal norms and values of the country. However Pakistani drama serials have gone from producing content ahead of the curve with progressive themes to regressive disasters.

Classics like Waris, Dhoop Kinare, Tanhaiyan, Rosy, etc which were progressive for their time, promote a positive image of Pakistan. Of course, this set a high benchmark for contemporary drama producers.