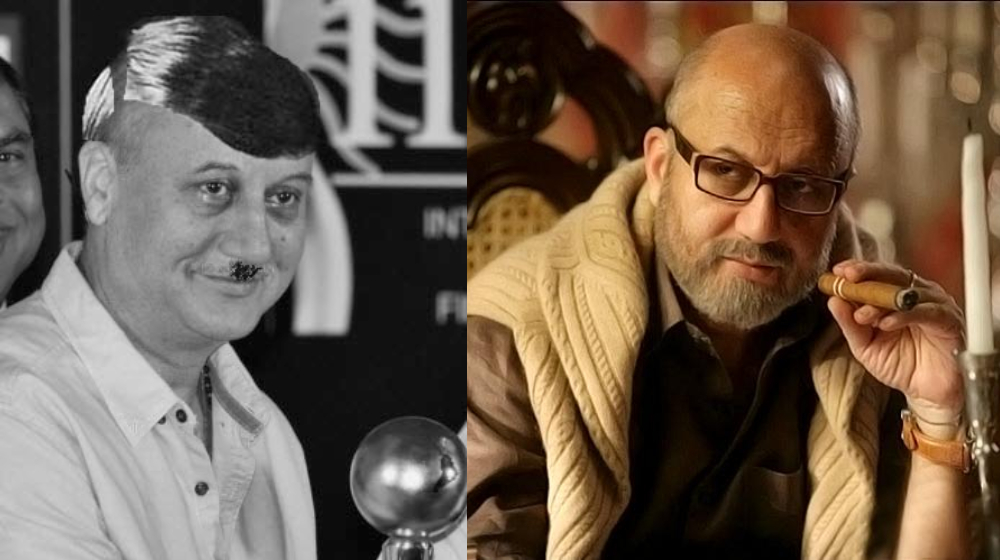 As Pakistani artists are calling out massive human rights violations in Kashmir, ‘Daish Bakhts‘ like Bollywood’s Anupam Kher are encouraging it. Apparently Kher is okay with calling for genocide of Kashmiris, gleefully referring to the recent happenings as the ‘Kashmir solution‘.

Here is what he tweeted recently:

What Is India Doing In Kashmir?

Despite protests from within the Indian parliament, Bhartia Janata Party’s (BJP) Home Minister Amit Shah wiped the Indian Constitution’s Article 370 and Article 35 A. Both these legal clauses acknowledged Kashmir’s disputed status and granted it special status.

This means that before, Kashmir was not considered as another province of India. Unfortunately, India wants to change this now.

BJP is calling this their ‘final Kashmir Solution’ in an attempt to ‘mainstream Kashmir’. This isn’t even the half of it. The ‘mainstreaming’ will involve mass genocide of Kashmiris as 40,000 additional Indian troops are being deployed to Kashmir to pave the way.

Additionally, Indians can now purchase land in Kashmir and kick out the natives of the land, just like what is happening in Palestine.

Sending 40,000 more troops to Kashmir (the MOST militarised place on earth), imposing a curfew, stopping internet, placing elected representatives under house arrest, asking tourists/foreigners to leave: all this psych-ops for what savagery + chest-thumping? #KashmirBleeds

Pakistani Celebs Raise Their Voice on Indian Brutality in Kashmir

Anupam Kher Is Calling for Genocide

While progressive Indians are appalled by the Indian government’s declaration of disputed territory Jammu and Kashmir as an Indian state. People like Anupam Kher are calling it the ‘Kashmir solution.‘ The tweet was undoubtedly inspired by Hitler’s ‘final solution‘.

You have blood on your hands @AnupamPKher
This is no longer about justice. This is revenge. https://t.co/Fx4t7HeAIw

No memory loss. Have reported on the Kashmiri pandits & the horror they faced. But, you seem to want revenge genocide Mr Kher. No Indian should want that https://t.co/vzUxNVoLoo

Even the controversial American conspiracy theorist Alex Jones did not shy away from calling this what it is, a form of neo-Nazism.

80 years ago, Hitler devised a Nazi plan for the genocide of Jews and called it the 'Final Solution'#KashmirBleeds https://t.co/dq5WyOEyYN

Responsible Indian citizens and Kashmiris are not shying away from calling out this call to genocide.

BJP’s mainstreaming of Kashmir is aimed at fortifying territory, not integrating people.

Shame on you ! An undeclared war against your own people remains both politically and ethically unjustifiable in any civilized democracy . https://t.co/zp3fqxydWj

Now you know why Accidental Prime Minister Was A Flop Within A Week ? https://t.co/FnFkuA8b8I

There were plenty of references to Nazism, because that’s what comes to mind when we think of mass ethnic cleansing.

One South Asian observer pointed out how the lack of coverage on the issue now is a prelude to the fact that this genocide will not be listed as the second Reich in history. After all, Modi’s been accepted as a head of state twice now despite his war crimes case in the International Criminal Court (ICC) following him masterminding and ordering the Gujrat Muslim cleansing.

The Kashmiris will survive, just like the Jews did, because Indians are not even a tenth as competent as Germans.

But Modi's Reich will be consigned to the dustbin of history, and will only be a small footnote when future historians describe the 21st century. https://t.co/4YsIBQqDTI

Another case in the ICC may not make a difference. No one stood up for Rohingya Muslims amidst their genocide in Myanmar for years, either.

Of course, Pakistanis had to highlight this blatant condoning of genocide.

Just a reminder your fav bollywood artists have shown public support for modi, the indian military and therefore the occupation of kashmir, some even admitting it openly like this. For many other reasons too, please stop supporting this insidious industry. https://t.co/G0APKbbsTQ

Disgusted to have ever been a fan of your work. You are merely a shameless creature. https://t.co/u9kkM5dGlg

Are you sure you're an artist? https://t.co/s9fougjpML

This guy never fails to disappoint with his jingoism and xenophobia. https://t.co/oPlAeBJ7NS

This reprehensible turd has been tweeting shit for years now, but still chills me to the bone to see how he is brazenly, unapologetically cheering on genocide here. The dehumanization of the people of Kashmir for such people in India is barely believable. https://t.co/qiKZfXghF3

You are such a disgusting person & called your self a human? Killing innocent kids, women & teenagers which you called a solution of Kashmir? We all stand with the innocent people of Kashmir, the UN & OIC must take action. https://t.co/4HcWVOgI1b

Hey @UN_Spokesperson: Can you confirm that this man cheering Indian military aggression in #Kashmir is one of your ambassadors? @antonioguterres @UN https://t.co/3BzTp8liJz

This is a poorly thought out tweet, one that normalizes hate and violence against an entire region. Anupam Kher should have known better.