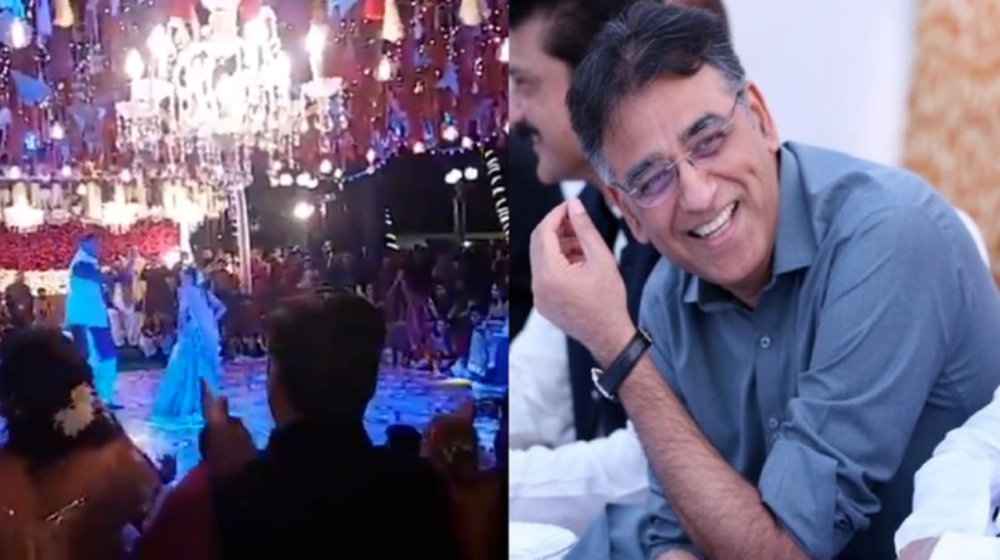 Like most parents, Asad Umar had a ball at his son’s wedding. Except when an Asad Umar dance video went viral and Twitter had mixed feelings about the whole thing.

When the Minister of Planning’s son Asif Umar got married, he did dance at the wedding. How did this become such a big deal though?

For most parents, it’s a milestone moment to witness this day in the life of your children. Those who are fortunate enough to share this memory with their children have a ball.

That’s what a wedding embodies to begin with, having fun and celebrating. That’s why with the viral Asad Umar dance video igniting mixed reactions, most people agree that the man deserves to let loose at his son’s wedding.

Yet at the same time, some people can’t unsee the former Finance Minister getting down to ‘Billo De Ghar‘.

Asad Umar dances on his Son's wedding in karachi.

Super cool dude @Asad_Umar on the dance floor with some stunning moves😍🕺🕺🕺 pic.twitter.com/IjZ5V6vgV0

This man made a point we can all get behind.

Doesn't matter what kind of Political challenges your government is facing, you have to dance when DJ plays "Billo de ghar" by Abrar-ul-Haq.
Asad Umar doing bhangra on his son's wedding https://t.co/zkvu4L4vDL

It wasn’t all jolly good fun because the man got trolled for dancing at his son’s wedding.

This one’s funny because the last time this guy interviewed Asad Umar, he was booted out from his job.

Wah, Asad Umar’s got quite the dance moves

Four days after my interview, he hasn’t resigned & is enjoying his son’s wedding😅#JinxBroken pic.twitter.com/9LUF8sE52W

@MBilalLakhani very well done, u brought the real @Asad_Umar out, a thoroughbred professional, thanks

Economy is now dancing with planing 😀

Things got political even here. How does something as normal as parents having fun at a child’s wedding get political?

@Asad_Umar dances like he managed his ministry!! Oafish!! 😜 #PTI

Asad Umar sb is a father so what if he showed some happiness and dance on his sons wedding which every father do but the worse creature on planet "Patwaris" made it a national issue and start abusing him.
pic.twitter.com/ibFwhrzrdW

PTI only better in dance 💃 😉

Thankfully, some netizens also jumped in to tell trolls to ‘just let the man live his regular life’.

All those Idiots forwarding and writing negative comments on @Asad_Umar dancing vdo circulating on social media should be ashamed,
why cant they bear to see someone happy on his sons mehndi event.
Don’t u all dance&enjoy
If Not then truly u r idiots who don’t know how to enjoy

Is it a sin or a crime to dance on a son's wedding…people are sharing a video of @Asad_Umar dancing on his son's mehndi….why have we became hypocrites????

Having opinions about Asad Umar’s dance skills is totally okay though.