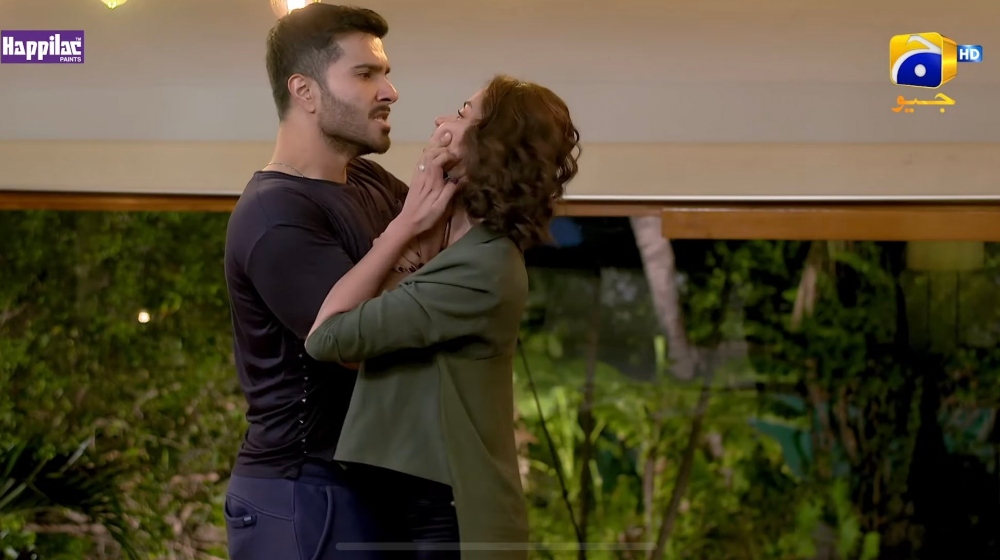 In a recent episode, we see Shiza (Nimra Khan) tell-all to Dua (Sana Javed) and our ‘protagonist’ Mustajab (Feroze Khan) resorts to abuse. Now we’re used to the actor essaying some very problematic tropes onscreen, but the violence against women just took it too far.

The whole sequence looked both emotionally and physically challenging. It was nerve wrecking to watch the unhinged and borderline psychotic shade of Mustajab.
#FerozeKhan is magnificent here, the man’s range >>
Anyone disagreeing can argue with the wall! #AyeMushtEKhaak pic.twitter.com/7O4147JVXk

ALSO READ
Aye Musht-e-Khaak: Are Dua and Mustajab’s Characters A Bit Too Frustrating?

Speaking of just blaming the woman! Since he’s not a grown man that can make his own decision.

Mustajab is always misguided by his mother.
She herself didn't support Bobby to move towards faith and religion.
Parents are the main reason for our interest in any faith and Allah.
Here SHAKEELA is responsible for all.#AyeMushtEKhaak #FerozeKhan #SanaJaved pic.twitter.com/nkurhZHZdn

He had a fight with Dayyan before leaving for America, he tried to harm Shiza & then was screaming at his mom🤦 #ayemushtekhaak why isn't his mom doing anything about his behaviour?

On the other hand, there’s also the matter of Mustajab wanting Dua to accept him as he is. Which is the baseline of a healthy relationship. Yet, he’s unwilling to accept her basic autonomy to decide if she even wants to stay with him.

Mustajab wont interfere between Dua&her faith
&doesnt even let her to change his mindset,his thoghts,his belief,no matter howmuch he loves her
He will stick to his faith
&wants Dua to accept him as the way he is
But,How will they match with each other?#AyeMushtEKhaak #FerozeKhan pic.twitter.com/SEbQOfol7v

Mustajab’s emotional manipulation was already a problem now he’s even resorting to coercion and planning to blatantly violate consent.

As always feroze khan is playing a very toxic abusive role , leave it to Hum tv to promote abuse towards women . Everyone watching this drama no that is not love , a guys angers issues is not a measure of how much he loves u #AyeMushtEKhaak

As for those asserting, ‘the script demanded such visualization’, all this could have been implied without showcasing violence on primetime television which we know gradually normalizing behavior.

#AyeMushtEKhaak we need to define what intense scenes mean. Two ppl screaming,physically pushing each other? I understand you might want to show abuse or a mental issue but it should be well defined with respect to characterization & situation.Everything shouldn't be exaggerated pic.twitter.com/J4ym59LYPh

What other problematic aspects of Aye Musht-e-Khaak do you find frustrating? Let us know in the comments below.