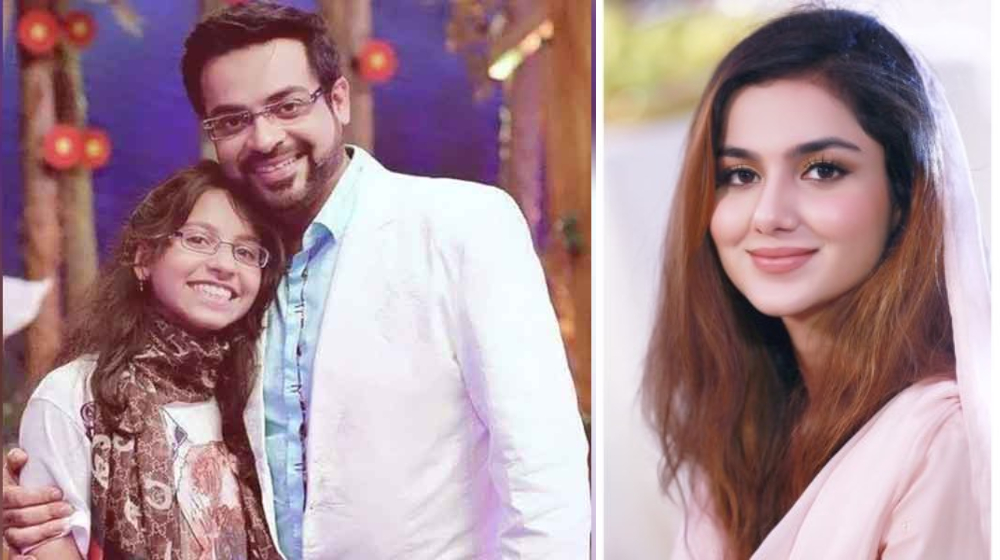 Aamir Liaquat has been having a ball ever since he got married, again. While his first wife held her silence on the matter, the family was clearly hurt given his daughter Dua Aamir’s emotional tweets.

While the teenager has been vocal on Twitter, her father has done the same on national television. Aamir Liaquat has had a lot to say about his family on TV.

This seeped through into Aamir Liaquat’s Ramzan transmission on PTV. His second wife Tuba Liaquat was with him on every TV appearance. While the two shared on-screen ‘awwh’ moments,  Aamir also took a jibe or two at his first wife.

Aamir and Tuba Liaquat are off performing Umrah. As it happens, Dua Liaquat is not cool with the ‘cute’ pictures that the couple is posting online. Without naming Tuba, Dua has made no secret of what she thinks about the whole thing.

Go to Makkah or Madinah all you want, Allah will not forgive those who have broken families and wronged their own. Its sad to see hypocrisy to such a large extent. Her sins could never be forgiven.

Dua Aamir took this opportunity and accused Tuba of ‘breaking up a family’. She says that its hypocritical when some people do this and then go on a religious pilgrimage.

This time Tuba did not hold her silence, choosing to respond on social media.

The most miraculous thing about Makkah & Madinah is that you can never just ‘go’ there until you are Called by the Master. Allah is the ultimate judge of everything & no matter how much anyone curses or hate, He knows the truth. There is a reason He is the judge and not humans😌

Tuba made it clear that ‘only God can judge me.’

Aamir Liaquat Gets Hitched for the Second Time

Late last year, news went around that television host Aamir Liaquat tied the knot for the second time. Right after Aamir Liaquat and Tuba Aamir announced their nuptials via Twitter, Dua Aamir was quick to react.

Aamir Liaquat’s eldest child posted a heartfelt message, speaking of the pain that a broken family goes through.

Yet everything is not as it seems. Making up a fake persona to create a positive image is something i simply cant stand. First made fake accounts cursing me and now is trying to downplay that by appearing kind. Dont ever utter anything about my well being from your fake mouth. pic.twitter.com/eDbwszLKl8

Aamir Liaquat and his first wife Bushra Aamir, who is also the mother of his two children, are not divorced (yet). They’re not on the best of terms either.

While Bushra Aamir has largely remained silent, her daughter Dua Aamir has not.

Many allege that Bushra’s influence lies behind Dua Aamir’s open disapproval of her father’s second marriage.