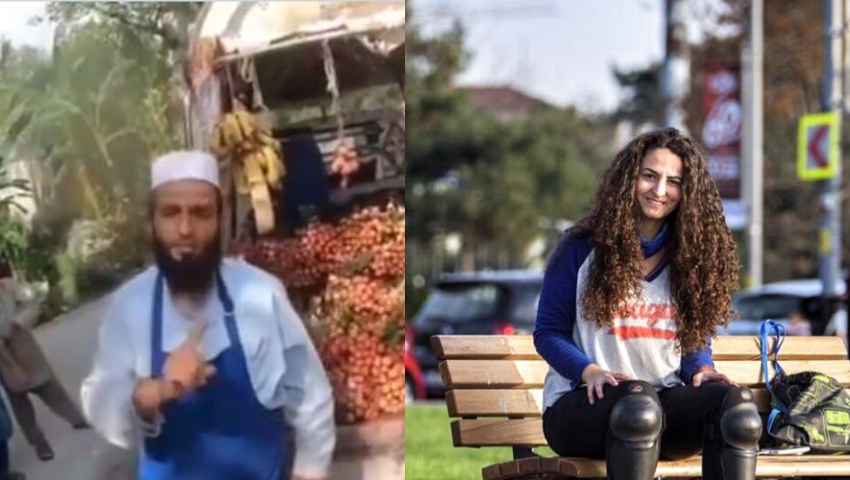 While Pakistanis welcome male adventurers like  Swiss cyclist, Silas Schmid and the ‘American Rickshaw Wala‘, Alexander Volberding, they may not be so friendly towards women. This is exactly what happened to Turkish biker Asil Ozbay recently.

While they don’t mind non-Muslim foreigners like Rosie Gabrielle, that may not always be the case for Muslim women. They may receive a cold shoulder (if they are lucky) or even religious sermons (if they are unlucky). Turkish biker Asil Ozbay experienced this while passing through Pakistan.

Bad Experience for a Turkish Tourist

Asil Ozbay was on her way when a fruit seller questioned whether she was a Muslim given she is a biker. When she told him she was indeed Muslim, he told her to ‘recite the Kalma‘ to prove it.

Here’s the video detailing the deeply unsettling and uncalled-for exchange between the tourist and the nosy fruit-seller:

As you can see from the video, Asil even went along with that ‘request.’ Reciting the Muslim Kalma should have been enough for this deeply ignorant fruit-seller but apparently that was not the end of it.

When she proved even that, he began with the ‘religious sermon‘ about how Muslim women should not be out in biker gear.

Asil asked him why, as a Muslim woman she had not encountered this ‘teaching‘ in her faith. She told him she had to wear biker gear when she’s biking. Her biking gear consists of a padded jacket, helmet, and full-length pants, and boots.

Call it a case of hurt pride, because this Pakistani fruit seller didn’t stop there. He then told her she shouldn’t be biking.

Pakistani themselves don't like these Molvi type people lol. they barely consist 3% of our population.

The fruit seller thought Asil’s body was ‘exposed‘ in the biker gear. Perhaps for this ignorant soul, its not protective unless it covers your whole body.

He added that with her biker clothes, people will ‘look at her body.‘ That has not stopped people from staring at burka-clad women, so we’re not sure what this man is smoking here.

The Turkish biker then put him in his place saying;

“No one looks at my body, it’s (all about having) a different mindset.”

Pakistanis Are Cancelling Netflix Over “Bard of Blood”

Is This How Pakistan Wants to Attract Tourists?

So Muslim ladies, before you set out to make your nation proud, please remember what this man had to say. You shouldn’t be doing so, to begin with, and please don’t demand any logical explanation for it. It just is that way, like unicorns just are.

Some people raised the issue of women being mistreated in Pakistan, given the conservative mindset.

Of course, Indian bhakhts chipped in, clearly cognizant of all that happens in Pakistan but not in their own backyard. That Pakistani fruit-seller did us no favors in the positive image-building department.

This bhakht even dragged Ilhan Omar, the Somali-American Muslim Congresswoman, into this. We think all extremists really don’t follow logic at all.

Truth be told, this Twitter user made the main point. Tourism doesn’t work without foreigners, this is how a fellow Muslima was treated, what about the others?

It really is unfair that Pakistan is being judged based on the actions of this one man. But it is necessary to do something to counter this negativity towards foreign visitors.

It's WRONG to frame an entire country for the behaviour of a single person!
There are people of different mentalities in all parts of world, so in Pakistan.
1/2

Even this former expat in Pakistan was appalled by the behavior.

With the number of Pakistani men supporting the fruit seller’s actions, that doesn’t bode well for tourism and the economy (uh-oh):

Nice job by fruit seller. His knowledge is great. Women should not expose their bodies.

Are the authorities awake to this extremely damaging incident? Or are they busy selling the idea of Pakistan being open for business and tourism, even though there’s a lot to be done in making Pakistan safe and a memorable destination for everyone.

We can help but remember a certain American blogger’s words about tourism in Pakistan here.