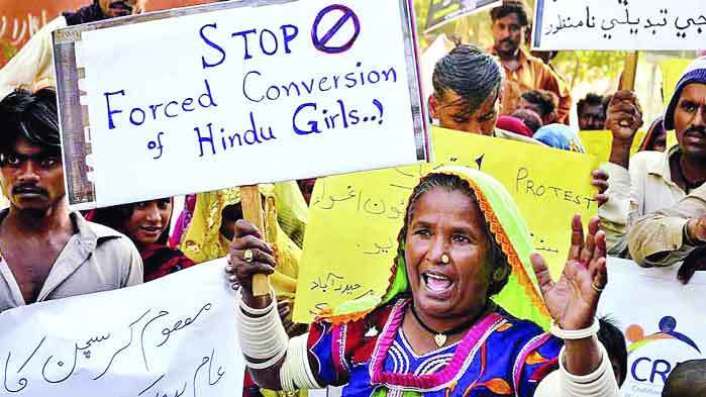 Pakistanis are focusing their attention on forced conversions as the hashtag #SindhRejectsForcedConversions trends on Twitter in the country. It brought together progressive Muslims and Hindus together on social media, with an aim to combat some grim customs in Pakistani society.

Forced conversions and forced marriages are a dark reality in Pakistan.

Over decades, as parents from Hindu community lost daughters to forced conversions, all govts stood by and watched the aggressors with impunity. As Pakistan lectures the world on minority rights, it remains silent on the persecution of its own.#SindhRejectsForcedConversions pic.twitter.com/8zracUU7md

In most cases, the victim is abducted and is then subjugated to sustained emotional and physical abuse often involving threats of violence towards their loved ones.

In Pakistan, girls belonging to minority Hindu, Sikh, and Christian communities are kidnapped, raped, forcibly converted to Islam, and married to Muslim men.

These girls are generally minors between 12 to 18 years old. According to The Centre for Social Justice and Peoples Commission for Minorities’ Rights, a majority of the victims of forced conversion are minors as young as 12 years old.

Every year, about 1,000 non-Muslim girls are forcibly converted to Islam in Pakistan. However, this terrifying problem is only getting worse, as the Human Rights Council of Pakistan reported that cases of forced conversion are increasing.

In 1947 Sindh's Hindu population was 28% & currently Hindus r 6.51%.
Still mission is continue to reduce this ratio too by forced conversion of minor Hindu Girls. #SindhRejectsForcedConversions pic.twitter.com/ZD1PuIL75k

This is one of the main reasons Hindus migrate from Pakistan to India, according to the Pakistan Hindu Council. Despite the Constitution of Pakistan safeguarding fundamental rights such as religious freedom, minorities are forced to flee for that right.

Islamic law prohibits forced conversion, following the Quranic principle that there is “no compulsion in religion” (2:256), but episodes of forced conversions are recorded in the history of Islam.

Evidence provided by numerous NGOs, journalists, and academics has shown that abductions and forced conversions are one of the most serious problems faced by Hindu and Christian women and girls. Minorities often do not receive the protection required from state institutions and lack access to justice.

What About the Law?

The Human Rights Commission of Pakistan reports that the police often turn a blind eye to reports of abduction and forced conversions, thereby creating impunity for perpetrators.

The police will often either refuse to record a First Information Report (FIR) or falsify the information, thereby denying families the chance to take their case any further.

Both the lower and higher courts of Pakistan have failed to follow proper procedures in cases that involve accusations of forced marriage and forced conversions.

The judiciary is often subject to fear of reprisal from extremist elements. In other cases, the judicial officers’ personal beliefs influence them into accepting the claims made that the woman/girl converted on her own free will.

Why Government why ?
How could you stay blind when our minors were converted?
Kiya waqae qanoon itna anda hai ?
Girls who can hardly select dress to wear are considered to convert and leave their parents with consent?
#SindhRejectsForcedConversions

There is often no investigation into the circumstances under which the conversion takes place and the age of the girl is often ignored. The girl/woman involved is largely left in the custody of her kidnapper throughout the trial process where she is subject to further threats to force her into denying her abduction and rape and claiming that the conversion was willing.

Many religious institutions, local mosques, and seminaries fail to investigate the nature of the conversion or the age of the bride and mostly simply accept the word of the abductor.

Jawala Rathi, while talking with the media shared that;

“We are the white part of this flag. We have been proving our patriotism since always, considering it our duty. And in return, we demand from our motherland the protection of our religion from forced conversions. We demand antiforced conversions bill to be passed in parliament. Now or never. We can’t afford to lose more sisters.”

Parkash Heerani posted when their trend suddenly disappeared from twitter;

“our hashtag is vanished due to whatever reasons. This is crucial time. People usually use twitter at this time. We need to BRING BACK our hashtag.”

When asked, Jaint Karmani expressed that,

“We created awareness to many, setting a top trend wasn’t easy neither these 200k plus tweets were but WE DID IT. It was eye opening for many concerned authorities, we showed them miniorities are not weak they can raise their voice together, BBC and many others newsweb covered it.”

"My daughter is a minor. Underaged. Who is supposed to be in school. How is she supposed to have a love marriage with a man who is of her father's age having 4 children" ~ cried the mother of Mahek Kumari. pic.twitter.com/ukHGxwjda4

“Good to see everyone coming forward without any fear!! Just stay like this, it’s just a start. We can bring change and revolution together in future.” Jaint concluded.

What started with just 4-5 people, now has over 7000 united together under one umbrella to fight against years of extremism.

Article 18 of the International Covenant on Civil and Political Rights (ICCPR) mandates the freedom of religion or belief and states that:

The State shall safeguard the legitimate rights and interests of minorities, including their due representation in the Federal and Provincial services.

However in reality, according to details from different sources;

The majority of reported incidents have taken place in the Sindh province. The Sindh legislature passed a law in 2016 outlawing forcible conversions and conversions before the age of 18, but the Governor refused to sign it into an Act, ostensibly under pressure from Muslim fundamentalist groups. The Sindh province circa 2017 had over 7% population of Hindus, including Dalits.

According to the National Commission of Justice and Peace and the Pakistan Hindu Council (PHC) around 1000 Hindu and Christian minority women are converted to Islam and then forcibly married off to their abductors or rapists. This practice is being reported increasingly in the districts of Tharparkar, Umerkot, and Mirpur Khas in Sindh. The actual number of cases is estimated to be higher as most of the cases go unreported.

According to the report by the Minority Rights Commission, the forced conversions and forced marriages are on the rise in South Punjab, particularly in Rahim Yar Khan and adjacent areas.

The Human Rights Commission of Pakistan found that many girls who had been presumed to have eloped had actually been kidnapped, and were later sold or forced to marry Muslim men. When the young, abducted, Hindu girl who has been forced to convert to Islam appears in court, the fanatics create a great brouhaha and follow her into the building due to which she gets intimidated and is unable to speak.

According to Abdul Hai of the Human Rights Commission of Pakistan, forced conversion of lower caste Hindus is taking place in large numbers but is going unreported.

According to the Dalit activist Surendar Valasai, every year around 1,000 to 1,200 Dalit Hindu girls are kidnapped and forcibly converted.

A 2014 report by the Movement for Solidarity and Peace (MSP) says about 1,000 women in Pakistan are forcibly converted to Islam every year.

According to Amarnath Motumal, the vice-chairperson of the Human Rights Commission of Pakistan, every month, an estimated 20 or more Hindu girls are abducted and converted, although exact figures are impossible to gather. In 2014 alone, 265 legal cases of forced conversion were reported mostly involving Hindu girls.

According to the National Commission of Justice and Peace and the Pakistan Hindu Council (PHC) around 1000 Christian and Hindu minority women are converted to Islam and then forcibly married off to their abductors or rapists. This practice is being reported increasingly in the districts of Tharparkar, Umerkot, and Mirpur Khas in Sindh.

According to a study by Birmingham University, nearly 3,000 forced conversions of minority women and girls took place in Pakistan during 2012-2017.

In 2016, a bill against forced conversion of minority girls was passed unanimously by the Sindh Provisional Assembly. However, the bill failed to make it into law as the Governor returned the bill due to the pressure from the Islamist groups and parties like the Council of Islamic Ideology and Jamaat-e-Islami.

In the 2018 general elections, the Pakistan People Party (PPP) ‘s election manifesto said that they will “Prevent forced conversion through legislative measures”. The 2013 election manifesto of Pakistan Muslim League N(PMLN) said “Necessary legislative measures will be undertaken to ensure there is no forced conversion of religion in the guise of marriage”, but this was removed from the 2018 Election Manifesto.

In October 2019, The Criminal Law (protection of minorities) Bill-a bill against forced conversion was proposed by Hindu politician Nand Kumar Goklani in the Sindh Assembly, but was turned down by the ruling Pakistan Peoples Party lawmakers.

The post was originally written by Sanjay Mathrani, who is Pakistan based Digital Media Journalist and Peace Activist hailing from Tharparkar, a hub of interfaith harmony.