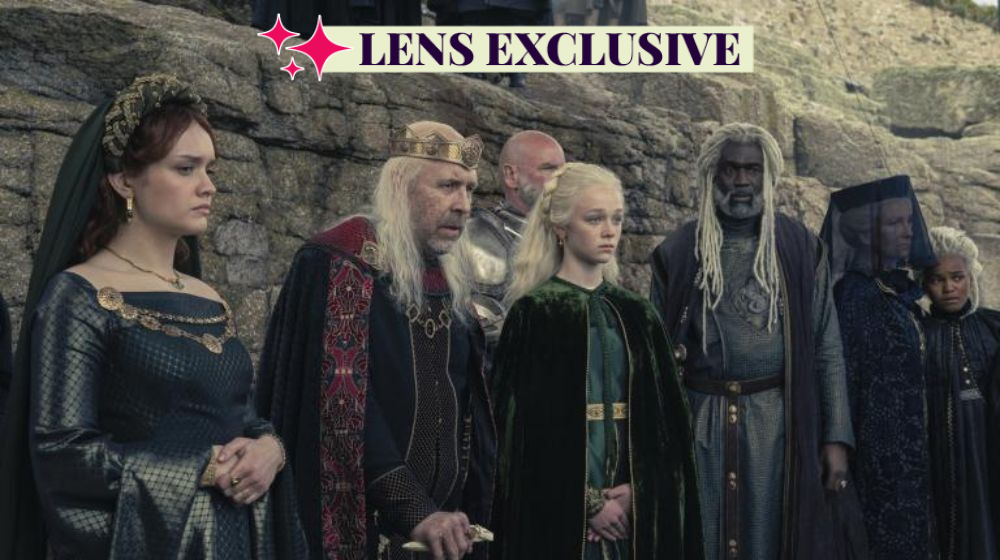 The seventh episode of the HBO series, House of the Dragon, begins with somber music, indicative of the death of a woman who has given her life for someone else. Prince Daemon Targaryen is laughing at the misfortune of Westeros’ most powerful person who has been failing for years despite his courage and power.

Making Ser Otto Hightower the Hand of the King appears to be a mistake by King Viserys as the conflict in his family has already begun, making it more difficult for him to transfer power peacefully to Princess Rhaenyra Targaryen. 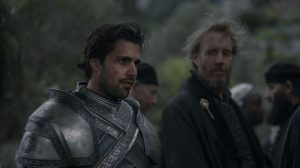 King Viserys shortly meets with Daemon and the brothers have a talk.

“Your girls are the very image of their mother. A comfort and anguish, as I well remember. The gods can be cruel” the king said.

“It seems they have been especially cruel to you,” Daemon replied moodily. 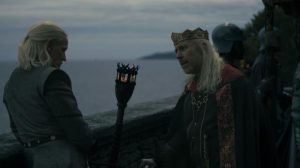 Ser Laenor and Aegon II have another addiction and they have no interest in other things.

In the sixth episode, Aegon II had told his mother, “Then I won’t challenge.”

When it comes to Ser Laenor, his behavior is the same as Aegon II’s.

One of the most touching scenes in the episode is when Corlys Velaryon tells Rhaenys, “You are looking to place blame for an act of the gods”.

(This is a smart religious touch added by George R. R. Martin to balance the plot.)

Rhaenys responds but in a different way, reminding him of what she had done for him for years.

“Tonight of all nights, let us lay aside this falsehood. It is not justice for your wife that drives you. It is your own ambition. ‘Tis desire for the throne, if not for yourself, then for the scions of your house. I gave up the idea of wearing a crown a generation ago. It is you, lord husband, who refuses to abandon this pursuit, even now, at the cost of our children,” she says.

Her harsh reply invokes the idea of a mother’s love and passion for her children — a point that was raised in the sixth episode as well when Rhaenyra told Ser Laenor “only one of us is bleeding”.

Corlys-Rhaenys Targaryen’s highly symbolic conversion concludes with him explaining to Rhaenys what made humans even greedier.

History does not remember the blood. It remembers names. 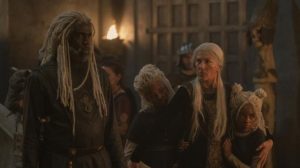 We switch back to Daemon and King Visery’s conversion, and Daemon says, “It seems they have been especially cruel to you”.

This is an obvious sign of the war that Viserys’ children, grandchildren, and nieces had experienced for the power of the dragon.

Queen Alicent Hightower’s attack on Rhaenyra‘s sons is reflected in her conversion with her father: “We play an ugly game. And now, for the first time, I see that you have the determination to win it”.

She tells Lord Larys Strong, “The day will doubtless come when I require such a friend,” which is a foreshadowing of the chaos that will eventually hit King’s Landing. 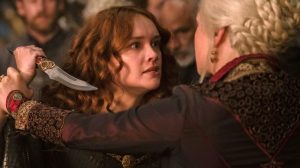 Daemon’s reunion with Rhaenyra was one of the best sequences that the fans had eagerly awaited. As long as the Targaryens would allow it, it was first romantic and then turn into plans for war in the future.

The parentage of Rhaenyra’s children was questioned numerous times in the episode, and it has finally come to light. This leads the situation to Rhaenyra and Daemon’s failed assassination attempt on Ser Laenor which bears similarities to Shakespeare’s Macbeth. 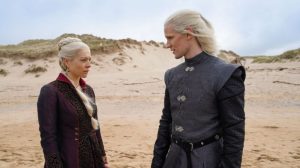 There are just three episodes left in season one, so things will move swifter than they did in the latest episode. However, this will still serve as a similar test of Game of Thrones, with unexpected twists and turns.

What do you make of it? Let us know in the comments below.