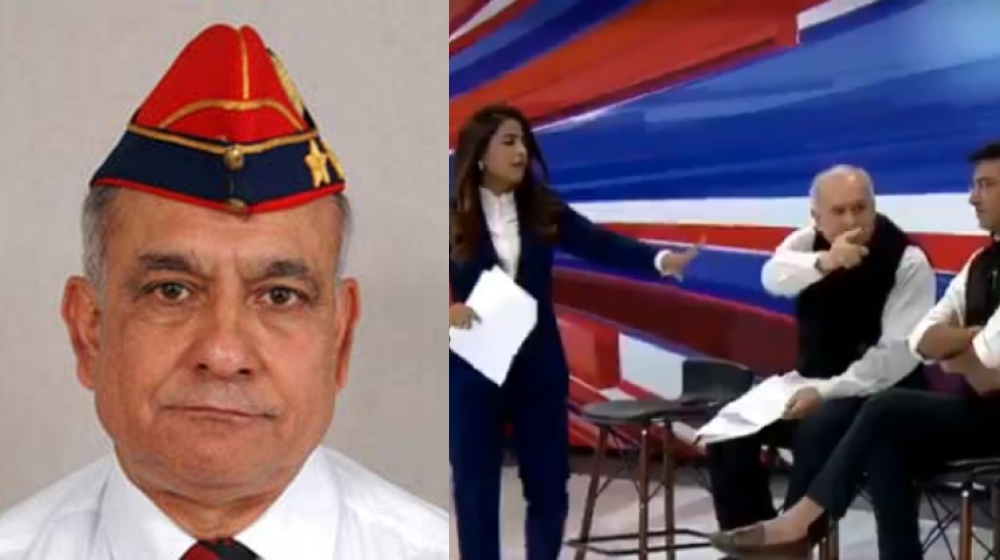 Retired Indian Army Major General Sinha has called for rape of Kashmiri women, on live television. Just when you think their bigotry has reached its limit, turns out there’s always someone who makes you question humanity.

Recently, the ex-General SP Sinha was part of a live television program. During the program, despite pleas from the anchor and everyone else to keep his ‘rape advocacy’ to himself, he began shouting ‘rape for rape’ at the top of his lungs.

Most likely a war criminal. According to 1996 HRW report, india uses rape as a "counter insurgency tactic" to terrorize the populace. #Kashmir https://t.co/ErYU6kJK39 https://t.co/W2i84MjEcf

A video clip of the TV program went viral Sunday night. Netizens could not grasp how ex-General Sinha could blatantly call for rape of Kashmiri women.

Netizens are even calling this the true face of India.

"Rape for a Rape"
"Death for a Death"

For the #World who is doing business with "the shining beacon of democracy" to see.

Yesterday, an ex Indian Army general called for rape and murder of Kashmiri Muslims on TV. He will be soon rewarded with a governorship for this criminal act in RSS/BJP controlled India. Goons like this are protected by the infamous Indian law, AFSPA. #StandWithKashmir #Kashmir

After seeing on TV an Indian retired general now a member of parliament for BJP-ordering rape of Kashmiri women one feels sorry for the country that once was proud of secularism and tolerance. Modi has turned Hindustan into Rapestan.

In this Vid Ex Army officer Major General SP Sinha admitted & Said that,
As a revenge for Kashmiri pandit exodus we will do rape of the kashmiri women "Balatkar ke badle Balatkar" (rape for rape).

This is how Indian army openly supporting rape of Kashmiri womens.#Shame #kashmir pic.twitter.com/mORu3uSmQ0

So no stripping his medals is not enough when General Sinha is a part of the government. This man is a policy-maker in India. His policy for women and Kashmir is clear.

His medals, if any ,should be stripped by @adgpi, Army

Veterans need to condemn him @MajChowdhury

Then, of course, there were the apologists looking to blame it on anything but the prevalent mindset.

When did @adgpi legitimize RAPE? or is this the view of an Army man after joining @BJP4India ??? https://t.co/QTuISCYux9

At this point, it’s not even surprising how the crowd supported General Sinha’s stance. They’ve done it all before.

It wasn’t just a statement by ex army general, mass rapes like in Kunan/Poshpora are testament to his words. They’ve used rape as a tool to curb dissent. Thousands of Kashmiri women were raped. Indian forces committed gang-rape of 882 Kashmiri women in 1992 alone. @IfraJan_

According to 1996 Human Rights Watch report, India uses rape as a “counter-insurgency tactic” in Indian Occupied Kashmir to terrorize the populace.

The ex-military man has a history of using rape as a ‘strategy. Back in 1991, the then Brigadier Sinha assembled Sikh villagers in a locality, calling for ‘creating a new breed for Punjab’ when the Indian military was crushing the Sikh movement in Punjab

“If any action occurs in this village, every single male is going to be taken out and shot. Then we’re are going to take all the women to our camp and there we’re going to create a new breed for Punjab.”

Ex-General Sinha is no ordinary war criminal, he has a knack for sexual violence against women. Then again with the Hindutva movement’s open prejudice towards women, this is no surprise. Particularly the Bhartiya Janata Party is known for inviting trolls involved in cyber crimes against women to their social media forums.